Logjam of a Beauteous Mind 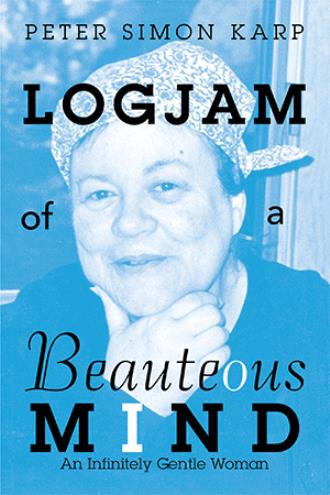 A vivid, gripping and inspired portrayal of Mona, a splendid woman, diagnosed with Stage 4 lung cancer & given 3-6 months to live. And her loving Caregiver, who leaves his high-tech firm to stay at home with his frightened wife to help her find the doctors, clinical treatment and “threads of Hope” to empower and transform herself into a feisty Cancer warrior and believer in her own Survival. Until Mona’s mind betrays her with a “Logjam chemo brain” madness, and she is dropped by Sloan-Kettering, sent home like a soldier with PTSD to face a psychiatric ward and death. How her loving Caregiver’s close family team & “Orange Juice” manage to break Mona’s downward spiral!

“A Universal Love Story. A Beautiful, Deeply-Human, Well-Written Book. Mona’s Story will Move You! It Reads like a Novel.”
— Author/Editor Marcy Dermansky [The Red Car]

“Karp and his wife, Mona, were surprised when a doctor diagnosed her with stage 4 lung cancer in 1993. The mother of two, in her mid- 50s, had never been a smoker.”

“Her chemotherapy had physical side effects…But Mona was most affected cognitively. She called it a ‘logjam’—a mental fogginess that marred her short-term memory and concentration. This bright woman, a former English teacher who loved travel, was now prone to psychotic episodes.”

“Karp’s book is both melancholic and engaging. His love and devotion to his wife are without question. He fondly details joyful moments, from the couple’s meet-cute decades earlier to bouts of happiness they reveled in post-diagnosis. The author’s generally unadorned prose in this touching memoir boasts instances of lyricism.”

“An absorbing and moving account of a couple’s fight against a terrible disease.”
— Kirkus Reviews

“No one you Love is forever Dead if you truly Believe their Goodness and Beauty Cannot Perish...For precious moments, our Past was not dead; it was not even Past.” “Logjam of a Beauteous Mind”

PETER SIMON KARP, President of BSI Global Research, Inc., and The Concept Testing Institute, became the instant “Caregiver” to his brilliant wife, Mona, when she was suddenly stricken with terminal lung cancer in her mid-50s. As Caregiver, he was with her every moment as they found the best doctors and most promising MSK clinical trial. When Mona’s mind betrayed her with “logjam chemo brain,” the hospital sent her home like a soldier with PTSD to face a psychiatric ward and death. But Caregiver and family team helped break her downward spiral, and Mona found the space to empower herself to become a cancer warrior and believer in her own “Survival”! Peter’s time spent as Mona’s Caregiver constituted the finest moments of the author’s life, with her day-and-night trying to save the life of his beloved wife.. A Hobart College graduate with a Columbia MFA in playwriting, Peter coauthored “Competing on Value,” Amacom, and authored,“Time Chords: Stones ~ Drowning,” two recent novellas.