The Unveiling Origin of Mecca 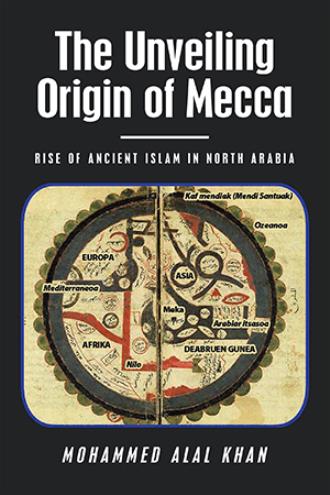 Quranic verse (Q’11:7) and cast down Adam on Earth. It has been said that God created the Ancient House Ka’bah) upon the water on four pillars, earth was then spread out underneath it. Adam build the first house on meadow obtained materials from mountains Sinai, Olive, Lebanon al-Judi and Hira. These mountains are in the North Arabian region Quran (Sura 22:29) perform their vows, and circumambulate the Ancient House. Quran described Ad and Thamud “who carve houses out of (rocky) mountains. They dwelled between the area of the Hijaz (Western Arabia) and Ash-Sham (Greater Syria). The land of the people of Ad was nearer Mecca than the valley of Hidjr, and the valley of Hidjr is situated at the extremity of the desert on the road to Syria. Hud came to 'Ad and admonished them, reminding them of what God had related in the Qur’an, but they persisted in disbelieving him, and challenged him to punish them. So, he said to them, "Knowledge is with God alone. I pass on to you that with which I have been sent. When 'Ad were unbelievers, they were smitten with a drought so terrible that they became extremely exhausted. When God punished 'Ad with the wind which castigated them, it tore up huge trees by the roots, and smashed their houses down upon them. Whoever was not in a house was blown by the wind until it split the mountains with him, and thus all of them were destroyed. The people of Thamud, Allah sent to them a pregnant female camel that emerged from solid rock, according to their request, so that it would become a proof against them from Allah, the Exalted. They were supposed to believe in what was brought to them by prophet Salih. People of Thamud killed She -Camel pierced her leg then severe tremor overtook them except a man Abu Righal was in Sacred Area (Ka’ba) did not touch him when went out of the Sacred area a stone fell from sky and killed him. Rock of sign unearthed in the Thamudian mountain the Siq is a natural geological fault split apart by tectonic force 1.2 kilometer. Abraham directed Hagar and Ishmael to go to al-Hijr, and settled them down there. Then he said, "My Lord! I have settled some of my posterity in an uncultivable valley near Your Holy House. Hagar had a worn-out waterskin which contained some water, but it gave out and she became thirsty . Then her milk ceased and Ishmael became thirsty. So, she looked for the lowest mountain in the area-it was al -Safa-and climbed it. Lot was the nephew of Ibrahim, Lut had believed in Ibrahim and migrated with him to the Sham area. Allah then sent Lut to the people of Sadum (Sodom) and the surrounding villages, to call them to Allah, enjoin righteousness and forbid them from their evil practices, their sin, and wickedness. And then they were overthrown, so that their foundations were towards the sky and their roofs towards the earth. And God rained on them stones heated in the fire of hell; and on each stone was written the name of him whom it was destined to slay. Now there were many natives of these accursed cities in other parts of the land, and where they were, they were sought out by the red-hot stones, and were struck down. But some were within the sacred enclosure of the temple at Mecca, and the stones waited for them in the air; and at the expiration of forty days they came forth, and as they came forth, the stones whistled through the air, and smote them, and they were slain. Quran 37: 136-138 described Mecca near by where Quraysh pass by day and night site of Sodom and Gomorrah, similarly dwelling place of Ad & Thamud now Meccans go to fro (Q. 32: 26). "The people of Makkah asked the Prophet (pbuh) to turn As- Safa' into gold for them, and to remove the mountains (from around Makkah) so that they could cultivate the land. Allah says I will do if they then disbelieve, they will be destroyed. One day the Messenger of God mounted al-Safa and called out, "Beware this morning!" Quraysh gathered said What is the matter? Then he said I am a warner to you in the face of a terrible doom." Then Abu Lahab said, "May you perish! Did you call us together for this?" Then God revealed: "The power of Abu Lahab will perish and he will perish" ... Quran described prophet Abraham asked for rituals of hajj (Q 2:128). Jibril held Ibrahim’s hand, led him to As-Safa and said, this is among the rituals of Allah.’ He then took him to Al-Marwah and said, ‘And this is among the rituals of Allah.’ He then took him to Mina until when they reached the ‘Aqabah, they found Iblls standing next to a tree. Jibril said, ‘Say Takbir (Allah is the Great) and throw (pebbles) at him. Prayer of Abraham for fruits in the Quran (2:126) accepted and blessed with fruits in sanctuary (6:99). None of these fruits except date, and all Quranic Suras are connected in the Saudi Arabian Mecca including mount of as-Safa. Around four freestanding temples have been discovered in Petra no specific and distinguished deities’ statues have been found in this building, and because its plan does not reflect a typical temple plan. Colosseum at Temple of Ka’ba in Mecca, excavated in the great temple of Petra.

According to holy Qur’an Ka’ba is the first house built on the earth, location of Ka’ba in Saudi Arabia does not match with Holy Quran, Bible, authentic Hadiths, ancient and Islamic history Arabian Geographers, such as Al- Muqadasi, Al-Wardi Muhammed ibn Khuldan, al’Imam abu-l-‘Abbas Ahmad ibn-Jabir al- Baladhuri `Ibn Battuta etc., and archaeological findings, including descriptions of Darb Zubayda (Pilgrim Road from Kufa to Mecca Province or Region: -Northern Borders, Hail, Qassim, Medina, Makkah Regions, and Egyptian Hajj Road, State, Province or Region:- Tabuk, Madinah, Makkah Regions, submitted by the Permanent Delegation of Saudi Arabia to the United Nations Educational Scientific and Cultural Organization (UNESCO). Evidence shows that Ka’ba in Becca midst of Mecca situated near valley of the Paran mountain in Thamud region in Hijir north -Western Arabia well to the north of Medina location described in the world map by al- Wardi. On the contrary worldwide more than 1.6 billion Muslims are praying five times a day facing towards Ka’ba, and performing major (Hajj) and minor (Umrah) pilgrimage and compass mountains Safa -Marwah around described in the Quran (2:158). No such mountains exist in the Saudi Arabian Mecca specifically in the south of Medina. It is not exaggeration to mention that there are many Islamic scholars, and Quran research Institutes, throughout the world, but sadly none of them yet verified the exact places, mountains surrounding Ka’ba and its sacred area according to Quran, hadiths and History of al-Tabari, Life of Muhammad Translation of Ibn Isiaq’s Sirat Rasul Allah, The Life of the Prophet Muhammad Al- Sira al-Nabawiyya Ibn-Kathir, and Ahsan At-Taqasim Fi Ma’rifat Al-Aqalim described precisely location surroundings places measuring distances not excepting places of wearing Ihram Miqat. This book comprising all the information and arranged original text including Complete History of Jews.