THE MYSTERY OF THE BLUE GOO 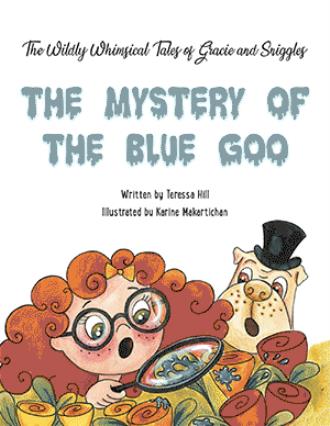 Searching for acorns, Sniggles snuffled when he sniffed and sniffled while he whiffed. He stumbled upon Bumble who was settled on a nettle. This wee little bee was not yellow, he could see. This bee was blue and covered in goo. Sniggles poked and prodded. “Why are you crying? And why are you blue?” Bumble replied, “The queen was so mean because I was blue. I did not match the rest of her crew.” He cried and he cried. “Boo-hoo! Boo-hoo!” Sniggles paused for a moment, this bee was so sad. He couldn’t believe the queen was so mad. “This can’t be true. She wouldn’t let you through with the rest of the crew because you are blue?” Bumble looked up; his eyes filled with tears. “Yes, it’s true. After my day’s work, I flew with my crew back to the hive. We waited in queue for her majesty’s review. As I grew close, she saw I was blue. I knew I was through. Boo-hoo, Boo-hoo! What am I going to do? Who’s going to listen to me? I’m just a wee bee who’s blue.” Bumble cried and he cried. Sniggles thought and thought. What could he do to help Bumble get out of the goo that was blue? “I’ll take you to meet my crew! They will know what to do. Gracie is my friend. She is as bright as a light and has lots of insight. She’ll figure this out and undo this blue goo.” Sniggles gave Bumble a lift on his nose to help him get to someone who would know. Sniggles waddled, waggled, and whistled a tune. “I’m feeling like a snack, a sn-ackle-lolli-astic-exter-pur-fur-le-cious kind of snack.” Bumble was gollysmacked. “A what?” he asked. Sniggles giggled. “It’s a snunch, a snack before for lunch, or a snupper, a snack before supper. It makes you happy because it’s super fantastic, extra crunchy, perfectly prepared, delightfully delicious.” Sniggles then whistled as he continued on down the path.   By the time Sniggles had finished his tune, he was all the way back to the shack, where Gracie and her friends were having a snack. “A snunch,” Sniggles sniffed. Gracie looked up, “You silly little snug, give me a hug. Where have you been?” She gave Sniggles a snug. Gracie noticed the bug sitting on his snout. “Without a doubt, you made a friend.” She looked to see. “It’s a wee little bee, no bigger than a pea! What a beautiful blue.” Gracie grinned. “It’s the goo. I’m not blue, I’m yellow.” Bumble cried and he cried. “Boo-hoo! Boo-hoo!” Sniggles set Bumble down on the ground. The wee little bee settled on a petal. His itty-bitty, teeny-weeny knees hung over the rim, he looked so grim. He swung and swayed his little blue shoes, that were covered in goo. Lucy felt lazy after a snooze and lounged in the tree. She gazed down upon the wee little bee, who was crying like crazy atop a daisy. “I think the bug needs a snug,” Lucy purred. They all gathered round, and Bumble began to tell his tale of the blue goo. “I flew with my crew, buzzing about, until I got tired and my wings gave out. When I came upon a rose, I sensed with my nose. I was tired—it’s true—and I needed to tie my shoe. So, I landed on the bloom, then I heard a big boom! The next thing I knew, I was blue.” He cried and he cried. “I flew back to the hive. I waited in queue like a good little bee with the rest of the crew. The queen screamed, ‘Blueberries are blue. Bluebells and bluebirds are blue. I will not let you through because you are blue! The bees in my hive are yellow, little fellow; now be gone!’ she bellowed. My feelers were hurt. I didn’t know what to do. I couldn’t go home because I was blue. So, I just sat there and cried. Boo-hoo, Boo-hoo!” Bumble wailed. “Dry your eyes, little Bumble,” Sniggles gave him a snuggle. Gracie replied as she stood by his side, “Your color doesn’t matter. We don’t see the blue; we see you.” Then Lucy purred, “There is no rejection, we are all perfection.” Ziggy handed Bumble a tissue and said, “Don’t worry, little bee, we’ll get you home. No need to be sad, you’re not alone.” Bumble dried his eyes and blew his nose. “Without a doubt, we’ll figure this out! Before you know it, you’ll be home in the hive, where you can thrive,” Bob crowed. That’s when Gracie leaned in with her quizzing glass to get a closer look at the blue goo. “We don’t mean to be prying while you are crying, but we need a clue about this goo,” Gracie said. “The blue goo is the first clue. The rose you sensed with your nose, where you tied your shoe, will be our second clue.” Suddenly, Lucy’s ears began to twitch in different directions, like a periscope on a submarine. “Shhhhhhh, I detect a noise,” she whispered, and she poised herself, her tail flicking and flailing. They all froze and leaned in with an ear to hear. Boom! “What was that?” Sniggles jiggled. Ziggy popped on top of Gracie’s head. His tail had doubled in size, he was so surprised. Bob was so discombobulated that he landed on Lucy, who was so startled by the sound that she nearly fell down. Her fur fluffed up, she froze in the air, and she didn’t even notice poor Bob in her hair. Bumble’s eyes looked hypnotized; he recognized the boom! Gracie peered into her magical kaleidoscope to see what she could see. Much to her dismay, she spied way, way, way, up high in the sky a blue plume from the big boom. “Look over there,” she said, pointing at the plume. “Let’s go! It’s another clue to the blue goo!” 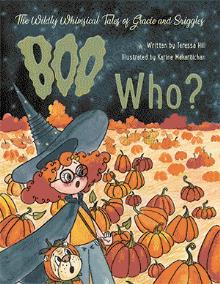 You’re invited to tag along with a precocious girl named Gracie and her dog, Sniggles, as they embark on a whimsical adventure, and meet new friends. They have moved out of the city and into the suburbs. When they arrive, they set out to explore their new surroundings. They meet a crow named Bob, Lucy the cat, Ziggy the squirrel, and Bumble a wee little bee who has somehow been painted blue. Bumble is sad because the queen bee will not allow him back into the hive because he is not yellow, like his fellows. The new friends set out together, following clues to figure out how Bumble was covered in blue goo, and what they can do to help him. Gracie and her friends remind us of the importance of kindness, acceptance and friendship. This beautifully illustrated children’s book is timely, when our world seems so divided. Young readers will enjoy the fun that the new friends have together, and the characters they meet along the way. Parents will appreciate the valuable message it offers about tolerance and compassion. It’s a fun read for adults and children alike.

Teressa Hill grew up in Oregon. She spent much of her time outside riding her horse Tiffany with her dog Luke trailing behind. When she wasn’t spending time outside with her beloved animals and nature, she trained as a competitive figure skater and traveled extensively. During her downtime from training, she wrote short stories and poetry. She also loved to sketch and later became an accomplished painter and sold several of her paintings. After Teressa’s competitive figure skating career she transitioned into her career as a film and television Hairstylist. That is when she began writing screenplays. In 2005 she wrote a children’s animated series which she has now developed into “The Wildly Whimsical Tales of Gracie and Sniggles” a series of children’s books. Her constant inspirations are her many furry companions she has been grateful to know throughout her life.

“When I grow up, I hope I become the person my dog thinks I am.”