Our Home In the Hills 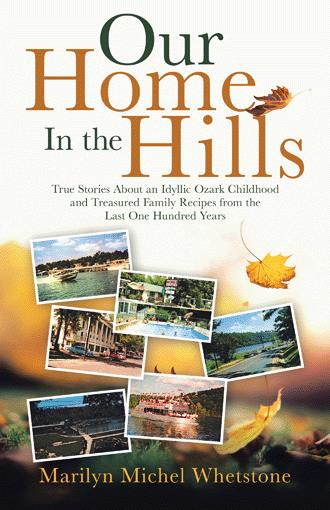 Around noon, a light beige two door Chevy Impala rolled into our driveway and parked in front of the stone bungalow before we had moved to the big house. Mom, Daddy Dow, and Uncle Albert, their fourth child and only son, were joining us, as usual for Easter Sunday dinner. They had attended church service at their small country church in Brown Branch where the men sat on one side and the women on the other, or the men simply waited outside while the women attended. Having quite the flare for entertaining, Mother could be counted upon to prepare lovely meals and had put the finishing touches on Easter dinner, the night before. Eight of us, still dressed in our Easter Sunday clothes, sat around the mahogany table with blue and cream color striped upholstered chairs in our small dining room. “Mom,” our very proper grandmother of English and Scottish descent, had on a spring navy blue dress and matching pill-box hat which sat elegantly atop her dark coiffed hair even as we ate. We girls were allowed to postpone changing into play clothes until after dinner because it was Easter Sunday.

As we dined on Mother’s traditional Easter feast, basking in the company of family, we gazed out the windows at fresh blooms of red bud, dogwood, and lilacs as they were beginning to dot the landscape where our home and the cottages sat. Once the fog lifted and the day dried out, it was a beautiful Easter Sunday. When the meal was finished, Mother’s family had the habit of lingering around the dinner table. We girls listened to stories told by our mother and grandparents about family, friends and neighbors who had been part of their lifelong community in eastern Taney County. The stories usually included who married whom, where they lived, and what they, or their offspring, were doing now. Sometimes the stories were funny, sometimes personal anecdotes about their growing up years in the Brown Branch area. In the era before television, computers, or iPads, much of the family history was passed down around dining room table conversation. Daddy, not growing up in their part of the county often did not know who the conversation was about, but he listened intently, and in all circumstances strove to treat Mom ad Daddy Dow with the greatest respect and courtesy. The stories often slightly bored me, but I was also fascinated by the tales of bygone times, people, and places, and I found that I really enjoyed sitting around the table with them for prolonged periods of time wondering how one more story could top the last one.

Finally, with a break in the stories, Mother started clearing the plates so we could have the homemade dessert, strawberry short-cake, that she had prepared the day before. Usually, by Easter, fresh strawberries were available; they were stemmed, sugared, and mashed with an old-fashioned manual potato masher, creating a scrumptious topping for the one-egg cake that served as the base for Mother’s version of this very favorite family dessert. The cake was split into two pieces; the first one was placed in the bowl and a spoonful of the strawberry mixture placed on top of it. The second piece of the cake was added to that with a second spoonful of strawberries poured on it, and the best part of the concoction was the freshly whipped cream dollop on the top.

Mother always whipped her cream in the electric mixer, but the newly patented aerosol can of whipped cream, called Reddi-Wip, caught her attention and imagination. How convenient it would be she thought, in a typical post World War II mindset geared toward convenience, if whipped cream as tasty as freshly whipped, could be captured in a can. She tried it, and liked it. Not only did Mother like it, Daddy, always intrigued with new ideas, gadgets, and gimmicks, was completely taken by it. As Mother served the strawberry short-cake without whipped cream so that each person could add his or her own, Daddy held the Reddi-Wip can and was eager to share their newfangled discovery with Mom and Daddy Dow, both born in the late nineteenth century and not accustomed to the new conveniences of modern times. He looked at Mom and said, “Vera, you are going to love this! Let me put some whipped cream on your short-cake.” He took the can and began to place the dollop on my my very prim and proper English grandmother’s dessert, after which her face, her Easter navy blue dress, and her matching pill-box hat were rapidly sprayed with a Reddi-Wip aerosol can gone array. Mother was aghast, Francie, Sherry, and I were stunned into silence, and poor Daddy became instantly pale. We didn’t know what to expect next. After a very pregnant pause, Mom decided the whipped cream was tasty, Mother gave her a cloth to help her clean her face, and in between sweet smacks of fresh whipping cream, she said, “It’s ok, Vernie! I know you didn’t mean to do that!”

There were no hard feelings. Opposite of what we first thought might be her reaction, Mom quickly got her wits back that Easter Sunday. She laughed and “let Daddy off the hook” for spraying her down with the newfangled contraption with which he had become seriously enamored. I saw that day that a sense of humor and not taking oneself too seriously can go a long way in promoting a healthy relationship with your daughter’s husband.

One of more than twenty-five first cousins who grew up together in the Ozark Mountains, Marilyn Michel Whetstone reveals in Our Home in the Hills how she experienced first-hand the joy and comfort of being part of a large, close-knit family.

In a collection of true stories and family recipes, Whetstone shares anecdotes that provide insight into her life growing up in the popular resort mecca of the Midwest, Rockaway Beach, during the 1950’s and 1960’s and the lives of guests who visited the family resort during that time. While transporting others on a nostalgic trip back to a simpler time, Whetstone details how unselfish acts of sacrifice and kindness promoted healthy and lasting bonds among relatives and friends. She shares the ups and downs in her teenage relationships and offers a glimpse into her close walk with Jesus Christ. Included are recipes that have been passed down in her family for more than a hundred years, providing a backdrop to her delightful stories.

“These inspired stories of faith, family, friends, and community will touch your heart. They evoke memories of the joy and blessing of my own growing up years in Ozark Mountain Country.”

Marilyn Michel Whetstone holds a master’s degree in education administration from Missouri State University and is a retired teacher of English. She lives in Branson, Missouri, with her husband of fifty-five years where they enjoy Table Rock Lake and other area attractions. Marilyn loves to garden, read, travel, and spend time with her children and grandchildren.