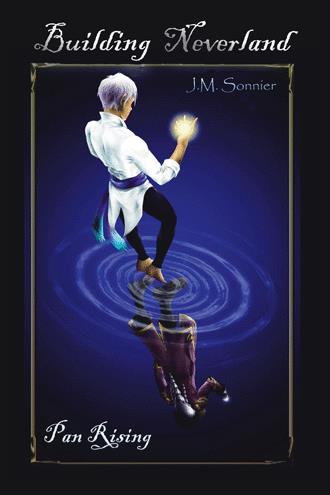 "GET THE PAN!" Shouts from the attacking war tribe carried across the wind as they gave chase over the sandy shores of the island. His breathing erratic, Peter ran over the coast as swiftly as a small child could possibly manage. He was just barely outrunning the tribe. Angered shouts cut through the air as his pursuers got closer and closer. Tears streamed down the boy's face, obstructing his already blurred vision as he hurried. He kicked sand up into the blinding light of the setting sun. There was nowhere else to go. If he did nothing they would catch up to him, putting him out the way they had the rest of his people: snuffed out like a small burning candle in the dark. The boy's gaze swept across the horizon with the waves lapping at his bare, burning feet. His heart pounded like a war drum in his narrow chest as the tribe continued their pursuit. Having little to no alternate options, Peter just began praying under his breath. Maybe the Gods would take pity on him and send some form of help...somehow. "Please..." he uttered, clutching at his chest as their rapidly encroaching footsteps and shouts drew nearer. "Please! If you are listening...if you are even there at all...help me!"For several tortuous moments, when no clear signs of help or a savior had arrived to halt the swiftly approaching danger, Peter was certain that the Gods had chosen to turn a blind eye to his desperate situation. Maybe they had forgotten about him entirely? Liquid formed in his eyes as he squeezed them shut tight, bracing himself. He only opened them to wipe their tears away with the back of his grimy fist. It was then that he saw it, just barely visible, an approaching vessel. It was hardly a speck on the blue horizon. It veered to the left of the island to skirt around the heavy mist. As well, the ship's silhouette was a dark contrasting shadow against the deep orange setting sun which hovered just above the edge of the world. Peter could just about make out the shape of its dark sails in the far distance. His salvation had arrived as he cried out loudly, raising his fists and gaze upward, "Thank you!" He looked back to the ship's distant hull with growing determination as he measured the space between it and himself. While he had never attempted a jump of such magnitude, Peter figured he could make a swim for it if his powers of flight ended up failing him halfway there. He did not have any other options. They were almost upon him, surrounding him from behind. Arrows began landing with sickening thuds, striking the sand about him. This caused a cascade of fine grit to fly in every direction. Time was running out, and the boat was gaining distance with every second that passed as it sailed to the side of the seemingly small innocuous island. With that, Peter lifted off of the shore, shakily at first. He gave his body a shove up with his feet and steadied himself. Peter then breathed a sigh of relief when he finally managed to get into the air. He had practiced his take off many times before, but never in such dire circumstances when his mind was filled with the many possible outcomes of his situation. His stress and heartache deepened as the speedily nearing danger distracted him from being able to accurately focus on his task. It took all of the concentration he could muster, but he did it. It was a struggle, what with the water sloshing at his feet each time he wobbled. Rocks and arrows hurled in his direction even as he began to reach more height in the air after a nearly lethal tumble too close to the ocean below. Their screams and cries for his head filled his small ears as he began to rise from the ground itself. Once he had achieved height, he hurriedly flew through the space between him and the water's edge. Peter then bounded over the ocean like a speeding purple Curu bird in the direction of the ship. He was getting further and further away from the fast-approaching tribe as they finally made it to where he had previously been standing. All bellowed and wasted little time trying to knock him from the skies with their sharp flying arrows and heavy rocks. Peter grunted as one rock hit him in the back before he had managed to escape. This nearly distracted him enough to cause him to tumble down towards the ocean below. Just as he was about to slam into its choppy surface, he halted mid-air. Bracing himself, his hands darted out in front of his face, shutting his eyes tight. Very slowly he opened them and turned to look towards the water beneath him as he realized he had regained his control. Within its depths swimming just beneath the surface, flittered silvery glowing fins. They were keeping up with his pace. He did not have time to carry on a discussion with them. He needed to get to the ship. With that and everything dire in mind, he carried onward until finally getting to the edge of the large wooden vessel.

In this dark re-imagining of Peter Pan, Peter is thrust off of the island violently only to land himself in the world of pirates. In this alternate tale, we will begin to discover the darker side to the Peter Pan story as Peter dives into the world of adults, piracy, kidnapping, and his journey towards becoming the great Captain Hook.