How family, faith, and laughter helped 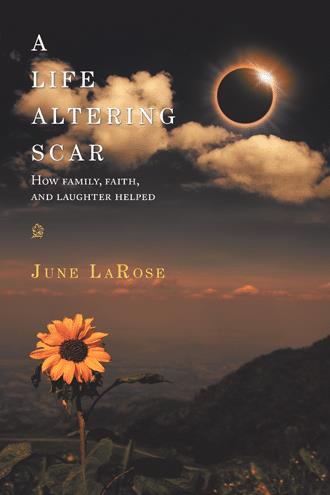 On Saturday morning, I finally managed to pull myself somewhat together. Armed with no memory of the past few days, I nonchalantly went upstairs for a much-needed shower and change of clothes. Mindy was at work; Roy was relaxing in the family room reading the newspaper while Michael enjoyed cartoons. Grabbing some clean clothes out of the closet, I headed towards the master bath. As I reached the doorway, the nearby surroundings instantly melted away when I saw an obscure entity in the mirror. As I attempted to focus in better, my eyes automatically kept opening wider and wider. My heart began to race and my body trembled in fear. The image had me thinking I was viewing it in 3D as though I could reach out and touch it. My mind started struggling to right this abnormality. That caused my brainwaves to feel scrunched up and confused, as a part of me semi-realized I couldn’t possibly be seeing that correctly. A very wrinkled apparition with long gray hair stood trapped in the bathroom mirror. The haggard woman wrapped in gray rags stood there staring mindlessly. She was standing upright framed by a wooden entranceway in the shape of a coffin. The gray smoke that engulfed the image made the surroundings appear to be floating towards me. Totally petrified, I was unable to even swallow. My concentration became completely locked on the image. The sad loneliness in her eyes and on her face, brought me to one undisputed conclusion, someone or thing had abused her. It wasn’t visual bruising; it was the kind of abuse that steals your soul and ambition to live. Although I desperately wanted to flee, I couldn’t move a single muscle. It felt as though I was being challenged to figure out what it truly was. Struggling to engage the correct brain connections, the apparition gradually moved out of the mirror as my image finally came into focus. Yet… “that new image” pushed me even deeper into shock as reality gave me “my” persona; I was now filled with more questions than answers. What I saw now was…I am the one who is marked with bruises, cuts, and swelling. Dreadfully wanting to divorce all of this from my sense of being, I questioned out loud, “Why am I so swollen and marked up? And, why hasn’t anyone else in the house noticed and told me how I look?” Utterly disoriented, it became essential to walk away, as the reality of this was extremely harsh to accept. While walking away, I kept instinctively shaking my head NO, not wanting any of this to be real. Utterly stunned, I reluctantly proceeded to examine my body to see if I could confirm what was or wasn’t real. Adding to my confusion, the injuries only appeared on the left side of my body. Deep purple, blue, and green marks were on my cheek, chin, and down my arm. Along with scrapes and cuts on my elbow and my forearm. A large bluish-green bruise the size of a large grapefruit appeared on my upper deltoid muscle. It seemed like I had been used as a punching bag, yet none of it hurt. And, I had no idea how I got that way! Totally overwhelmed with more questions than answers my first rational questions were: Who the hell beat me up? Why don’t I feel pain or know WHAT happened to me? My emotions fell all over the place. I appeared to be in someone else’s body, and “I” no longer existed! Out of angry frustration I asked myself again, Why hasn’t anyone else noticed this? How could no one else in the house not see all these bruises, scrapes, and swelling? They do see me, don’t they? My emotions were frustrated and stunned. That pushed the core of my existence to an extremely sad empty place. My whole being acknowledged, it was now imperative to know what was real. It became essential to validate all of this with someone else. Filled with anxious anticipation, I found my way back to the family room where Roy was reading. That apparition, the one that first appeared in the mirror, became another forgotten memory. Not a word was mentioned to anyone about it. Although not obvious to me, my mind must have been running on one track at a time. The focus moved to the marks on me and how they got there. I asked Roy quite casually, “Does my face look swollen to you?” He moved the newspaper down so he could look at me. With a raised eyebrow, and a sense of apprehension that I even asked, he examined my face. His probing looks quickly turned to disbelief. “You look like shit! What did you do?” With sheer sadness I thought, That validated what I saw, but you could have been more sympathetic. Shaking my head and rolling my eyes, I started to walk away. Immediately realizing what he had just done, in a more apologetic voice he said, “How did you get so bruised and cut up?” My face contorted into an angry pissed off bitch look, as I was becoming emotionally unraveled. All I could say as I snapped back, “I honestly don’t know.” And I thought, You obviously don’t care. With even more irritation in my voice, “I must have bumped into something, but I don’t remember how, what, where, or even when it happened.”

All of us have or will have struggles in our lives that end up causing scars we could never have imagined would happen. I needed to trigger a positive outcome from my possibly fatal larger-than-life injury. I absolutely had to find a way to make sense of it. That is what compelled me to capture it and then write about my experience. That desire was to help others as well as myself. By telling you what I went through “in detail,” this story places me in a very vulnerable position. Yet, I am willing to subject myself to that knowing it could possibly benefit others. Throughout parts of this memoir, I needed to take my life back from the grips of death, and you will see how family, faith, and laughter helped me to do that.

June grew up in the small town of East Rochester, in New York. Her home now is in Gananda / Walworth, NY, where she enjoys her Koi pond, gardens, and the warmth of small town living. She is not one to give up on her dreams. At the age of 56, she fulfilled her lifelong dream to obtain a degree. The Finger Lakes Community College is where she achieved that dream. She earned an AAS in Business Administration with high honors. In fact, she is recognized twice in the 95th edition of The Phi Theta Kappa Honor Society book. As a lifetime member of the Ladies Auxiliary, at the VFW post 8495, she volunteers and enjoys the camaraderie of the veterans and their spouses. She also volunteers two to three days a week at the local hospital.