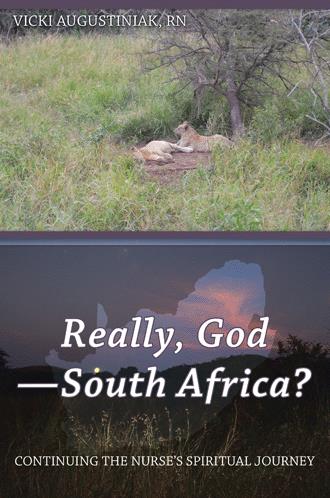 Chapter 1Really, God—South Africa?April 12, 2013I am sitting in the United lounge waiting for a flight to Washington, DC, and on to South Africa. We have been planning for months. Because of unrest in Bangladesh, we were unable to go. Eun Jin, Tom, and Mia were going to go to Bangladesh, but it was too unsafe. Not going was very hard on me. Dr. Susan asked me if I wanted to go to South Africa. After talking it over with Rick, I’m going. Rick was not working when I went to the first meeting, so I was not sure if we could afford for me to go.Three weeks after that meeting, Rick got a job making more money than me. God’s plan always amazes me. I always thought I would be going to Africa, so this trip is very exciting for me. I keep saying, “God you are taking me to Africa, now.” I cannot believe He took me to Bangladesh first. All I can think of is that I was not ready before. I am ready now. We have been so busy. I was telling the women at work, “When the thought of an eighteen-hour flight is appealing, you know that you are too busy.”What have I been busy with?I am co-chair for the 2013 Al-Anon convention at Shanty Creek. The convention is May 3–5, 2013. So, we come back April 28, 2013, and the next weekend is the convention. We have been hosting meetings, and Susan and I are program co-chairs. We finished the program last week. I am also coordinator with Shanty Creek, so trying to get people to commit is hard. I am leaving Susan to take care of final details. We had a conference call with Shanty Creek on Wednesday. It looks like we are in good shape—our speakers and panels are in place. We are having some controversy, but our delegate is handling it.The thing that kept me busy was the release of my book. Yes, I finished the book. I changed the title to Really, God—Bangladesh? I did have the book edited, and the book is better than I imaged. We had two book signings. The first was with the Korean people at our house. Eu Soo invited many people. Rick made good food. We had about forty-five people in attendance. I was not sure what to do. I found two things in the process—first, wear glasses when signing books and, second, ask people to spell their names when signing, even if you know the people well; they could spell their names different than you think. This happened to me several times. Can you image knowing someone for years? I spelled my friend’s name Kathy, and she spells it Cathy. How embarrassing. I have been preparing for this trip. It seems I have been working for most of the meetings, so I have had to come after work.
1300We are in Washington, DC, awaiting the flight to Africa. We have a five-hour layover, so we are walking the airport waiting for the plane. We are a group of nineteen, seventeen of us from Michigan. Two are coming from Kansas. Their plane will be arriving about 2:00 p.m.How can I describe the group?• Dr. Susan is the reason I am here. She asked me to come. Once again, we will travel with each other. I will be grateful to her for this trip.• Dr. Michelle, who in my understanding is a pediatrician, takes a leadership role, especially in worship.• Dr. H. Rao is a peds oncologist working in Ann Arbor. He is young and, I believe, Indian. He also has done some work in Bangladesh. When he told me this, I could not believe how God has put us together.• Carol is the group leader. She is young, energetic, and full of life. She is leaving three children—ages six, four, and one. What commitment that she would leave a one-year-old.• Michelle is my buddy. For the next few weeks, we will watch out for each other.
1730We are on the plane. We are going to Africa. This will be a long flight, but we will stop halfway there. The plane is full. I am sitting in row fifty-three in the middle seat. Carol is on my right, and Mike is on my left. I will need traveling mercies.Other people traveling with me are:• Pashan is an RN working at Royal Oak Beaumont. He said he was a pharmacy tech, so he will be doing the pharmacy. (He will be handling all the pharmaceutical needs)• Annette is an RN working in a MD office. She is our team leader for nursing.• Christine knows my friend Christine at work. She babysits Christine’s grandchildren, and she I nervous; this is her first trip.• Brenda has been to Africa a few times. She is young and works in PT at Troy.• Melissa is also young and quiet.• Mike is making his second trip and will be doing building work. The TSA already removed some building supplies from his bags• Alex is the youngest member of the group at seventeen. He is without parents. We already went to the gift shop together for the Smithsonian in Washington, DC.• Ray had a stroke a few weeks ago but is still going with us. I admire his courage.• Helen is Ray’s wife. They live in St. Louis, so we have only seen them by video. It was nice to finally meet them.• Mary is sweet, and this is her first trip.• Terry is young. She lived in Africa with the Mafus for seven months.• Kathy is also a nurse. She works with Annette.• Tom is her husband. I am not sure what he will be doing.

At the core of her being, author and registered nurse Vicki Augustiniak is a helper. In Really, God—South Africa? she shares the experiences of her travels abroad to assist others with their health needs. Through her story, she shows how God uses an ordinary person like her to be of aid to others. Through a series of journal entries, she chronicles her trip to South Africa in 2013 with others to provide health care to people of all ages. Augustiniak discusses her work abroad, the daily routine, the challenges and trials, and the joys. A continuation of Augustiniak’s previous travels to Bangladesh, Really, God—South Africa? offers insight into the work of medical missions in a foreign country. It chornicles how God’s work is being accomplished by those who selflessly serve others.

Vicki Augustiniak, RN, became a nurse in 1972 and worked in the neonatal intensive care unit, pediatrics, and mother-baby. She retired in 2016 but continues to work on a contingent basis. Her first medical outreach was in 2003 to Bangladesh, and she continues to travel as a nurse to foreign lands. Augustiniak and her husband, Rick, have been married forty-seven years. She has two children, six grandchildren, one great-grandchild.