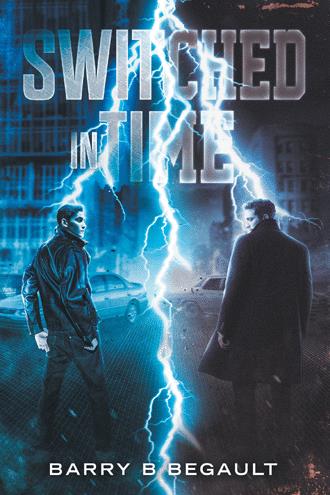 While he waited at the red traffic light, he fiddled with his radio trying to find a weather bulletin. When he finally looked up, the signal had turned green, and the car ahead of him was about two car lengths in front of him almost through the intersection. A quick glance in his review mirror revealed that there was nobody behind him, so he slowly started to go through the intersection. The car had barely moved when his nerves were abruptly rattled by three dazzling bolts of lightning that struck the road immediately in front of his car. They temporarily blinded him with their brilliance and deafened him with their combined loud thunder roar. He cringed and was knocked back into his driver’s seat by the surprise of it while he simultaneously and instinctively slammed on the car’s brakes. He felt the tingle of electricity from the lightning discharging around his car; it made his body hairs stand on end. "Son of a bitch,” he screamed in the enclosed car. "What the hell was that?” His eyes were still not totally ready for the darkness of the day, the image of the brilliant lightning flashes was still etched on his retinas like when a flashbulb goes off in your face. An electrical tingling sensation passed through his body from toe to head. A car behind him was leaning on the horn, and he thought it odd because he was sure he didn’t see that car behind him the moment before the lightning flash, but then probably he wouldn’t have noticed a battleship behind him either in this weather. "Damn, dude, didn’t you see what just happened?” he yelled. The rain was a torrent now, and he rubbed his eyes with the knuckles of his forefingers. He slowly drove through the green light squinting to see ahead of his car in the heavy rain and mist and still shaking a little from the incident with furrowed brow in concentration. The headlights only penetrated the darkness fifteen to twenty feet ahead, and in this rain and mist, didn’t give a lot of indication of what was ahead. The rear window and front windshield defrosters were on, but the humidity film caused the glass to distort the images. With the darkness of the storm, it was a miserable and dangerous drive. The trip to his mother’s house was now slowed to even more of a crawl because of the weather and his apprehensions of the dangers in this weather. The area seemed strange he noticed, but he just couldn’t put his finger on what it was; just different. The area seems darker than usual. Maybe that last lightning strike took out a transformer on a telephone pole he thought as he looked around. He turned right off of Veterans then two blocks later he took a left and then a block later a right to his mother’s street. He knew the route, and even in this horrible weather, he felt like he had a GPS built in his head. The feeling that things didn’t look quite right still haunted him, but he couldn’t really see much because of the darkness and the weather. The cold rain fell so intensely that even with his A/C running on full, his side windows stayed fogged up. "That’s southern weather for you, humidity and all," he said to no one in particular. He drove slowly down the half block to his mother’s house, and he could see a car shape parked in front of his mom’s house and two other car shapes parked in the driveway behind his mother’s car in the carport. Strange. I wonder who all those parked cars belong to at mom’s house? Maybe her bowling team has something at home? He pulled up to his mom’s long driveway and parked at the end of it behind an older yellow Ford LTD. He put his car in park, and shut down the engine and waited for the rain to let up before getting out. Naturally, he forgot his umbrella in his foyer from the last rainstorm. While he casually studied the line of cars ahead of him, he was struck out of the blue with a thought that hit him like the lightning he just encountered. "Holy shit. That’s Dad’s car ahead of me in the driveway, Bruce’s car in front of Dad’s and Barbara’s car in front of the house half parked on the front lawn. Except it’s the cars, they had back in the ’70s. What the hell’s going on?” he shouted to himself inside the car. The rain slowed to a light drizzle, and he could see the cars more clearly. He surveyed up and down the block, and the area was just like it was in the seventies. Old cars parked in driveways and in front of houses, old cars by today’s standards anyway. But how was this possible? What happened?

David Bernard, 45, is switched in time with his 20-year-old self. Both of them now in times they don't belong, and they need to get back to their own time. Only one person has the answer of what happened, why it happened, and how to reverse the situation.

I have been a science fiction write for over 30 years, not continually but in spats. I have written seven unusually science fiction books and am now ready to publish. My ideas take a while to to obtain critical mass. It starts with an kernel of an idea, and keeps building until I have enough to put on paper, at least to start.