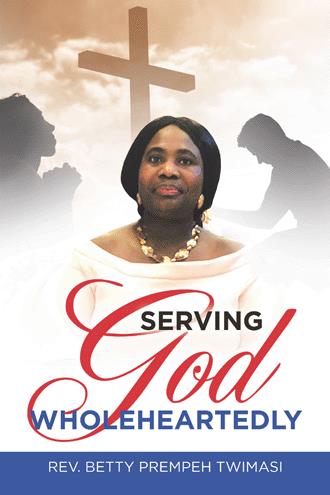 We are in a time and dispensation where we may be familiarized with the saying “serve the Lord wholeheartedly”. But there is a lot of blessings hidden in the Lord should we serve Him with all that is in us. That is the main aim of this book. We are made to know how we could serve the Lord wholeheartedly and give ourselves the process to grow in the Lord. Serving the Lord Wholeheartedly is a book worth reading and you would want to give yourself the treat of enlarging your scope on this less spoken of area of the church. Not serving God wholeheartedly connotes unintelligence on our part and when we understand the word of God, this becomes an easier task to pursue. I have a role, you have a role and quite interestingly, God smiles when we obey Him in service.

Betty Prempeh-Twimasi is a dynamic and energetic woman of God with an Apostolic mandate and a passion to see the body of Christ come into their full potential in their service to God. She is a motivational speaker, an Evangelist, Teacher, Revivalist, Intercessor, Administrator, Caterer, a marriage counselor and a minister who is highly interested in seeing Christian marriages flourish in today’s society. This is evidenced in the various programs she hosts such as the Marriage Survival Program, and Family Empowerment through Ministers & Church Workers’ Conference and also coaches Couples, Singles, Widows, and Single Parents throughout the world. She has preached all over the world in countries like Italy, Germany, Nigeria, Ghana, England. Scotland, Belguim, Togo, Cote D’lvoire Holland and other countries. She also owns a Radio Station called Compassion Radio where she hosts a program through which she reaches many and preaches the gospel of salvation. She counsels in many international churches throughout the world and has a missionary ministry called The Lord Compassion Outreach International which is helping the needy who have lost their families. As a Mother and also a wife she makes sure she does all to glorify the name of the Lord Reverend Prempeh-Twimasi received a Degree in Biblical Studies and Theology at Southeastern Baptist Theological Seminary (SEBTS) and a Degree in Theology at Gate of Heaven Seminary. She has a Bachelor’s Degree in Catering, and from the School of Evangelical Associates, a degree in Administration. She became a certified nursing assistant; a profession which she engaged in for roughly 10 years. A series of events saw her answer to a long sounding call from God, and after she answered that call, she has not turned back. She is currently part of a pastoral team at the Resurrection Power and Living Bread Ministry in the U.S. A. and runs, the Compassion Ministry which is concerned with spreading the love of God through donations, giving and helping the needy. She has been married to Mr John Domfel Twimasi for the past 18 years and is blessed with three Beautiful children: Fredirck, Chelsea, and Ebenezer Prempeh Twimasi. Reverend Betty Prempeh-Twimasi has an unwavering assurance in the power of God, and in His faithfulness to see her through difficult circumstances and encourages all people she comes across to remain faithful to the call of God upon their lives. She has gone through pains in sickness and also throughout her calling but nothing stops her from achieving her goals and also accomplish the greatness of the Lord. Let us stand for the Lord for the days are evil and the Time is near. Amen and God bless you!