Be Careful What You Wish For

A true story of an American family’s five year adventure living on the high seas. 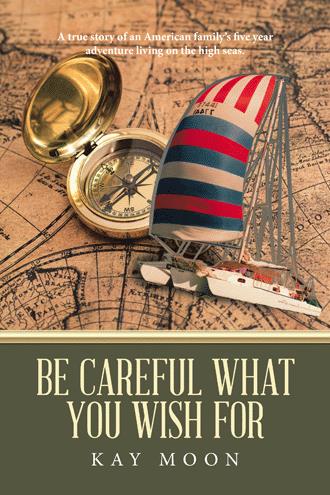 After three days Daryl stated that we had waited long enough. Bad weather or not, we were heading back to Samoa. This turned out to be our very worse sail ever and one I will never forget. We pulled our anchor at 7:30am and headed out. The seas were rough and we had strong winds on our nose. We hadn't been out long when Daryl informed me that he was sick...again, and had to lay down. Nathan wasn't feeling too good either. Dustin and I took turns at the wheel throughout the day and we tried to get some sleep in between. We had our two dinghies lashed down to the boat on either side of the cabin top. We had also tied down everything else we thought might blow off the boat. By nightfall Nathan was feeling better but Daryl was still in bed sick. In nice weather we would let Nathan take a turn at the wheel during the day and Dustin could even do some short night watches. This, however, was nowhere near nice weather. It was, in fact, the worst I had ever seen. Before dark the boys and I were able to reduce our sails down as much as possible. We reefed down the main and had our storm jib up. After that I wouldn't even allow the boys to be up on deck at all. The wind was blowing something fierce and even standing upright was becoming a challenge. There should have been some moonlight but the skies were so cloudy the moon couldn't shine through. I had donned my foul weather gear not only because of the rain but for the waves which would crash over the boat every few minutes. Our wheel was in the center of the boat in our cockpit. It had a compass mounted just behind the wheel which had a light on it. I knew the course we needed to stay on to reach Samoa and also knew that I couldn't let the boat get sideways to the waves. If this happened, one of the big waves coming at us could flip our whole vessel over. I spent approximately eight hours with my feet planted in the exact same spot in front of that wheel. I had to squint through salty eyelashes to see the compass as the waves broke over Lunar Glow and rained salt water over my head. My yellow rain hat helped to keep my hair out of my face and that was a plus. I was scared. My knees knocked together so hard that I feared by morning they would be bruised, if indeed, we saw morning. And I can tell you I have never prayed so hard in all my life. I know the Lord helped me through that awful night because I never could have done it on my own.

This book is a true account of the why’s, the how’s, and the life of an American family that left their comfortable life living in an extremely small Northern Nevada community to move aboard a 37 foot trimaran sailboat which became their home for five years. It will make you laugh and cry and shake your head when you ask yourself, “What was this crazy lady thinking”? But in the end you will realize that if there’s a will there’s a way.

Kay Moon has led a long, full, and courageous life. She is the posterity of the pioneers that helped to settle the wild west in the early days of our country. She was a pioneer in her own right being one of the earliest parents to embrace home schooling at a time when this was almost unheard of. Kay has been blessed with wonderful children and grandchildren. She currently lives in Arizona with her husband and has been a small business owner for several years.