Born and Raised in Sawdust

My Journey around the World in Eighty Years 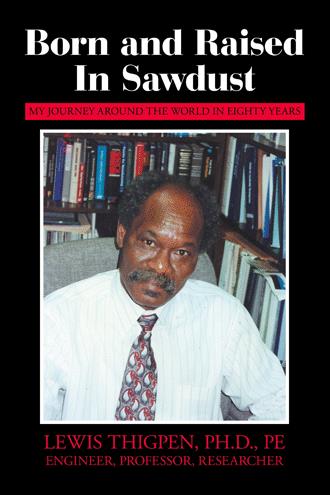 The year 1960 was interesting in race relations. We had sit-ins and demonstrations. Black people in some communities registered to vote. As late as 1960, my brother Amos was the first and probably only black person to register to vote in Sawdust. Amos voted in the primaries at Sawdust Store at the intersection of Florida State Highway 65 and County Highway 274 (Providence Road). For the general election for the President of the United States between John F. Kennedy and Richard M. Nixon, Luther Clark dropped Amos off at Sawdust Store to vote. I was sitting on the front porch at our house when Luther picked up Amos. A short time later, the white bully in Sawdust drove by in his pickup truck headed toward the polling place. I thought that there may be trouble, so I got in my 1953 Ford and drove to the store. When I arrived, white men were standing around and the bully had Amos by the collar of his shirt. Obviously the other white men had called the bully. I drove right up in front of them, Amos got in my car, and we left. Of course, I had protection in my car. One Friday night in spring 1961, I went to the Sawdust Store to purchase some small canned food items. The bully was in the store with several black people who lived and worked on his family’s farm. As I stood around waiting for my turn to be served, the bully said, “You Thigpens think you are something, voting.” The black people with him looked at me as if I had done something wrong. They appeared to be angry with me. I left the store and went home to get my revolver for protection. I told my parents that I had forgotten something. However, I went to another store farther away for my purchases. I did not want to be in a situation to do something that I would later regret. I continued at FAMU [Florida A&M University] and registered for the second semester of the academic year 1960–1961. Prior to that second semester, I had not taken Analytic Geometry and Calculus. But I had studied the curriculum of the first two years in engineering at Howard University and knew that I was wasting time in the pre-engineering program at FAMU. I talked to Mr. Blake, Director of the Pre-engineering Program at FAMU, and we went to see the head of the Mathematics Department. She allowed me to enroll in Analytic Geometry and Calculus. However, when I went to the Analytic Geometry and Calculus class, the instructor asked if I had taken a course called Analysis, a combination of algebra and trigonometry. I had not taken that course and the instructor would not allow me to remain in her class. I responded that the head of the department had allowed me to enroll in it. The instructor might have been trying to protect her courses. She told the department head that I had not taken the Analysis course. When I got to the next class period of Analytic Geometry and Calculus, the instructor told me again that I was not allowed to take that course. I informed Mr. Blake and we went to see the department head again. This time, I was not allowed to remain in the course. I informed Mr. Blake that I was going to withdraw from the University. He did not want me to withdraw because he thought that I would not return to college. Nonetheless, I withdrew and received seventy-five percent of the tuition that I had paid. I sent an application to Howard University in Washington, D.C., for their Mechanical Engineering program housed in the School of Engineering and Architecture. Meanwhile, I went back to Sawdust and worked on Newell Edwards’s family’s shade tobacco farm. His nephew, Marcus Edwards, ran the daily operations. My life was circling around farm work. I did everything from setting, looping, tying, wrapping, and priming tobacco to leading irrigation efforts. I also carried tobacco workers to the farm in the mornings, took them home for lunch and back to work, and home in the evenings. My mother worked on the Edwards farm too, so I would drop her off for lunch first. The worst part of the job was taking the workers back to work after lunch. They always had to stop at the Sawdust Store. Sometimes I got back to the farm after 1:00 pm and was admonished for being late with the crew. I took the blame without making excuses. I did not get paid any more than any other male farm worker for the extra work. I worked there throughout the second semester in 1961. I believed that with patience, I could reach my goal to become an engineer. Improving my employment status would take time.

Born and Raised in Sawdust: My Journey Around the World in Eighty Years is the deeply moving autobiography of Lewis Thigpen as a black boy growing up in a loving family in a small, tight knit community in the deep South during the extremely segregated Jim Crow era. It captures his life on the farm and in school in a revealing, instructive, yet colorful way despite the discrimination he encountered. Fearful of being a farm worker or common laborer for the rest of his life, he joined the U.S. Army, where racism persisted even though President Truman had ordered desegregation of the entire military in 1948. He served for three years. Against the odds, Thigpen persevered. Despite adversity and lack of money, he attended college, earned the Ph.D. degree, and became a renowned engineer, research scientist, and scholar. He rose to become chair of mechanical engineering at a distinguished university. The book is an easy read, designed for those who choose to pick it up at a bookstore, order it online, check it out at their public library, or download it to Kindle or other apps. It is a valuable addition to the canon of biographies, histories, literary works and cultural studies of the South. It captures the mood of Southern writers such as Flannery O’Conner, Pearl Cleage, William Faulkner, Richard Wright and Ralph Ellison. Readers interested in family history and ancestry will love tracing through Dr. Thigpen’s family tree, photographs and drawings. One photo shows him holding a silver salmon, the outcome of one of his favorite hobbies—fishing. In his autobiography, Dr. Thigpen brings the clarity and conciseness of an engineer and research scientist who has written and published numerous articles in refereed journals.

Lewis Thigpen’s autobiography is an insightful, heroic, against-the-odds story for readers interested in history, southern culture, race relations, farm life, and professional achievement. His remarkable story is enlightening, entertaining and frequently humorous as well as humane. Born in the late 1930s and raised in a loving, close-knit family on a farm in Sawdust, Florida, during the extreme cruelty of the Jim Crow era, he depicts a world of limited resources to put food on the table. Yet he finds joy as a boy in a time of austerity and adversity. He relates his creativity in fishing, hunting and trapping wild animals and birds, and making his own toys—anything having to do with a boyhood full of delight. His story is in many ways a perspective on the life of any boy—the many games they play, the delights of competition. Much of his ingenuity shows early signs of the outstanding scientist he would become. Fearful of being a farm worker or common laborer for the rest of his life, Thigpen joined the U.S. Army, where racism persisted even though President Truman had ordered desegregation of the entire military in 1948. During his three years in the Army, he served in the States and West Germany and achieved the grade of E-5. Despite the challenges of segregation and severely limited funds, Thigpen achieved an excellent education and proceeded to prominence as a renowned engineer, scholar and inventor; research scientist at leading national laboratories; tenured professor; and university administrator. His research has been published in numerous juried science and engineering journals. Thigpen’s book covers eighty years—his journey to outstanding accomplishments and embrace of cultural, technological and political changes. Along the way, he built strong friendships across many races and countries lasting a lifetime.