ARCHIBALD HYMAN AND THE BOUNTY OF THE PEDDLER OF AUTUMN 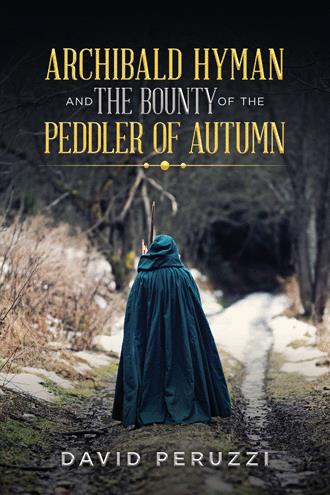 “They removed all the trees.” Archibald said. The Cowboy looked at him. “Yes.” He whispered, “But your traps are still undetected.” Archibald looked into the eyes of the Cowboy as he removed the toothpick from his bloody lip. The Cowboy gave a subtle wink to the Demi-God. For a moment the enemies understood each other. The only trees Archibald could see were two large cotton woods that grew directly to north end of the hallow. Two lonely sentinels that sat quietly. The trees looked lost, the last two days have been trying for them. They watched as their remaining kin were forcefully ripped from the earth and murdered in front of their eyes. Archibald’s appearance didn’t lift their sprits as they remained still in the Peddler hollow. “My salvation lies with you.” The Cowboy muttered as he tossed the toothpick into the dirt. The dead air caused the toothpick to drop to the ground, never to flow freely. “Don’t drink his cider. Don’t sign his ledger.” The Cowboy’s voice was low and caring. “Don’t become his trophy to be displayed and mocked.” The sound of heavy chains and creaking wood was indescribable. The weight of the world and outcome of Big Timber rested on a man who was abandoned and forsaken his entire like. The hunter reflected on how his life had reminded him of James Broad. Tossed away and dealt a bad hand. Odds have always been stacked against him. Training for an unknown enemy. Forgotten by his true father. Made to live a life of solitude and loneness, but when called upon must defend the mortals with his life. The corn rows began to bend away, causing a clear, long path. On the horizon, the Peddler stood. He was smiling at Archibald as his skinny hands lifted the large chains and links into the air. Two thick candles burned on the ends of this cart, providing a small amount of light as he wrote. The flames from the candles danced around in the breeze of the autumn air flowing from the mountain side. His hat still covered his face, but a small line of black hair could be seen at the end of his nose. His dried lips and teeth curled as it made Archibald thirsty by its sickening sight. “BEHOLD!” The Peddlers voice echo through the hallow of Crazy Mountain. It was like a scorn or contempt directed at the God of Lightning and Thunder himself. The two trees that stood behind the Peddler were the only good items left in this curse land and they both looked terrified. Like two lost children, hoping someone would come and liberate them from this hellish nightmare. “THE HERO OF BIG TIMBER ARRIVES!” The entire section of the crop cheered and yelled out in a happy laugher. For the time to see their master in battle was close and inviting. Autumn was nearing the end and what and ending this would make during the long winter, spring and summer mouths. “He awaits you hero.” The Cowboy said to Archibald. The Demi-God began his walk towards the Peddler. “I never said I was a hero.” Hyman muttered as he reached the bottom of the hill. His heart was in his throat as he was several yards away from his opponent. The Peddler’s smile faded as he looked up at the Cowboy. No respect for the man. After tonight there would be no need for him anymore. A new and much more powerful servant would satisfy the Peddler. If he could only can make him sign his ledger. The Cowboy knew his time was short. He still had put his faith and hope into the young and out matched hunter of the forest. “But you are Archibald Hyman.” The Cowboy said to himself. “You always were a hero.”

Long ago, before the creation of mankind, earth was a battlefield between the Titans and the gods. The Titans patiently await their release from Tartarus to once again battle for the world they have lost to their children. Servants of the Titans, known as Dark Breakers, think they have discovered the entrance to the prison in the small town of Big Timber, Montana. A young demigod outcast named Archibald Hyman is the only one who can defend the town before the key to the prison door is turned, freeing the Titans. Take a ride through modern times as the young hunter tries to understand his purpose on earth as he does his best to protect a town that does not want him against an ancient and powerful force that will do anything to free their masters. “Making a sacrificing for the ones you love is easy. Protecting the one who despises you is what makes a hero.”

David Peruzzi was born in Newark, NJ. He graduated high school in 1992 from Pope John XXIII. He enlisted in the United States Air Force in January 1996 and retired in 2015 at the rank of Master Sargent. During his transition form the military to the civilian sector, David began writing the series of Archibald Hyman as a hobby. As an experienced tracker and bow hunter, David ‘s creation of the Demi-God developed from much of his time spent in the woods surrounded by natures solitude environment. Much of David’s time is spent with his loving family who have supported during the growth of this book.