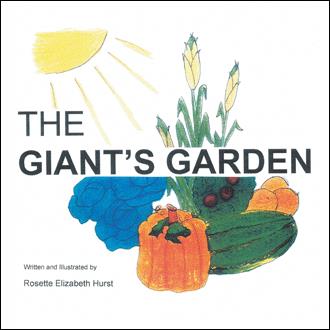 When he awoke he jumped to his feet and roared aloud I want something to eat.

A hardworking giant plans, plants, and enjoys his garden. Sadly, as sometimes happens, forces of nature destroy his beautiful garden, and he is saddened by his loss until, after much thinking, he comes up with a very logical and satisfying solution. Rosette grew up reading about Babe the Blue Ox, The Giant and the Beanstalk, Goliath, and many more. While her siblings and friends were putting on capes and trying to fly like Superman, she donned furs and tromped through the woods, streams, and valleys searching for the lost land giants. Enjoy the activities in this book, which include the following: crossword puzzle, word search, word puzzle, maze, decoding, jokes, giant facts, giant song, and giant craft. Rosette Hurst is in the process of publishing several other children’s short stories. Look for them at your favorite bookstore or online.

R.E Hurst was born in Oregon into a large family. Her sisters taught her to read and write. By the age of three, she was telling long stories to her siblings and friends. Throughout her school years, literature, drama and creative writing were her favorite subjects. She was a ghost writer for many years. She is now retired, and she is returning to the world of creative writing. She studied fine arts and produced several portraits, landscapes, seascapes, and florals using oils. She sculpts in wood, clay and concrete. Volumes of stories and poems reflect her delightful sense of humor and Christian background. Her father was a country doctor in Kentucky, Tennessee. He relocated to Oregon where Rosette was born in 1948. She loved playing by the ocean in Bandon and enjoyed years on the farm. This is where she learned to milk cows, ride horses, haul hay, garden, change irrigation pipes, and care for the livestock. Many adventures on the farm included being chased by a mama bear, bobcat, and a snake. She took long hikes over the hills, through the valleys and rivers. The old swimming hole with the “Huck Finn” island was a favorite spot for some fun, picnics and camping. After graduating from high school, she moved to Bayonne, New Jersey. She worked on Madison Avenue in Manhattan and attended Rutgers University. In the ‘80’s, her mother became ill, and Rosette returned to Oregon. While there, she attended university and returned to writing. She was offered and accepted a job in Redlands, California. There, she helped form an art association and produced newsletters and Christmas cards. At this time, she returned to fine arts and illustrations. Rosette’s retirement brought her to Missouri. She now delights in gardening, sculpting, painting, and writing. One of her favorite memories is tiptoeing to reach the table where her father kept his large-print Bible opened. She tried to read many marked passages in this bible. What a heritage!