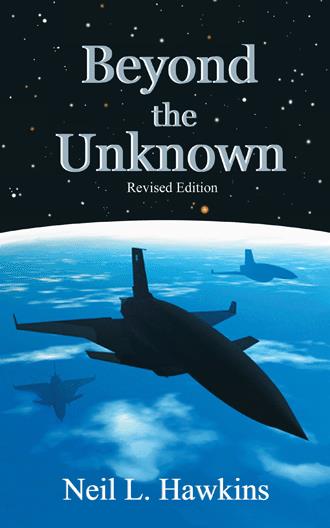 “If all of you will let me finish,” Varkon said, “all will become clear. Although the Federation for some reason kept their findings to themselves until now, they’ve also thought for some time that the Great Void was simply an endless region of empty space. But that belief was shattered two days ago. As you all know, Federation ships have been exploring the galaxy at least three thousand years longer than we have, and as a result they’ve placed several satellites and probes throughout a good many of the quadrants to monitor what goes on in those regions of space. Two days ago, the deep space sensors of a recently placed satellite array on the far edge of the quadrant in question picked up and relayed to Earth and to the other Federation members a distant dark ‘spot,’ which Earth’s military experts now believe could very well be a fleet of ships heading toward us.” “A fleet of ships?” helmsman Lieutenant Ivan Dmitri said. “Excuse me, Captain, but that’s really something. And if they are ships,” he then said, “is it possible they could be the Harlins who invaded Commander Pool’s planet?” “That very likelihood was discussed by those in the Federation, Ivan,” Varkon said, “but whether or not the Harlins from Pool’s timeline are now here in our timeline isn’t known. But it’s doubtful. As far as we know from our experience with Pool, the Harlins exist only in his timeline and probably have no ability to travel between timelines. Besides, if the Harlins in fact exist in our timeline, they would be nomadic residents of a distant quadrant on this side of that empty space, meaning they couldn’t be heading this way from within or beyond that region of space. So, I don’t think we or anyone within the Federation need be worried about the Harlins. Now, the reason it’s suspected that what’s out there is a fleet of ships is because the spot appears to be made up of individual dots that aren’t in a random pattern, but have the appearance of being a well-organized formation. But whether it’s a fleet of ships or something else, the information from the Federation satellite array indicates it’s coming from deep within the empty region or from the other side, if in fact another side exists.” “And if there is another side,” chief tactical officer Nis Sexton said, “then that could mean our arm of the galaxy expands out farther than previously thought.” “That’s a possibility,” Varkon said, “but that may never be known for sure. Because the satellite array was placed at the edge of that quadrant of space, and no Federation ship has yet fully explored that area, there’s no information about the space that lies beyond it. But whether or not our arm of the galaxy goes on much farther is not now the concern. It’s been estimated that whatever’s out there won’t reach the edge of our quadrant for several years, which indicates it’s possibly been traveling for hundreds of years, if not longer. If the object consists of ships, our task is to find out where they’re coming from, who or what’s on board, and what their intentions are for approaching our side of the void.” “But if the Federation’s looking into what could be visitors from out of nowhere,” tactical officer Lieutenant Commander Orin Brindan said, “why must we get involved? And if we must get involved, just how’s that going to work?” “The only information Commodore Stanford passed on to me was that Explorer and Star Traveler are to depart for Earth and join up with two of their ships. We’ll then use our trans-vortex systems to go out and meet whatever it is that’s intending to pay us a visit. If it is ships, and whoever or whatever’s on board prove friendly, we’ll allow them to continue to whatever destination they have in mind, as long as it doesn’t interfere with any area within the influence of the Federation. If they prove hostile, we’ll either engage them or retreat and call the Federation for assistance.” “Excuse me,” Lieutenant Dima said, “but referring to Lieutenant Commander Brindan’s question, “why have we been ordered to take part in this reception committee? Why can’t the Federation do it alone?” “That was the first question I asked Commodore Stanford,” Varkon said. “Apparently, not all ships within the Federation are yet equipped with the trans-vortex. The closest equipped are those from Earth. But only two are currently available. Others could be recalled, but Admiral Hult felt a joint mission would be best; that we should join his two ships. After President Shunt informed Commodore Stanford of the discovery, he said he agreed with Admiral Hult and ordered the commodore to see to it that we joined the mission. So, there you have it. That’s all I can tell you. I’ll inform the crew that we’ll depart at 0700 hours tomorrow, and I’ll explain why so the grumbling will be kept to a minimum. Star Traveler’s captain and her staff are also being briefed at this time. After receiving final instructions from Admiral Hult as to what our part in the mission will be, we’ll go out and meet the mystery object and see what’s what. Now, let’s get back to the job of running this fine ship.”

This seventh sequel to The Book in the Loft series involves the fulfillment of a dying man’s request and takes Commander Neil MacBruce and the crews of Explorer and Star Traveler to investigate an object moving toward them from deep inside a vast empty region within the galaxy. What will the crews discover, and how will they unravel the questions that arise? In their attempt to find the answers, they begin a journey that finds them engaged in a life-and-death struggle on the other side of nowhere.

A native of Poughkeepsie, New York, he attended Augustana College, Rock Island, Illinois and the University of Stockholm in Sweden, later receiving a BA degree from the University of Minnesota and an MS degree from Peabody Teachers College, Nashville, Tennessee. Since the age of five, when he “saw” Earth and the other planets from space in all their detail—twelve years before Sputnik—he has been intrigued and fascinated with flights of reality and fantasy. It was said he had a childhood out-of-body flight of the soul, as what he described then was identical to what has now only been seen by the Hubble Telescope. Later, his flights of reality were realized during a distinguished career as an Air Force officer, and his flights of fantasy became reality when he spent several years in “another world” (Russia), where he taught English at two technical institutions. After his marriage to a wonderful Russian woman, he combined their “two worlds” with his imagination in stories that took both through time and space to other worlds. He and his wife now reside on this world in their home on the shore of the mighty River Volga.