Book II of a Trilogy: The Indivisible Light 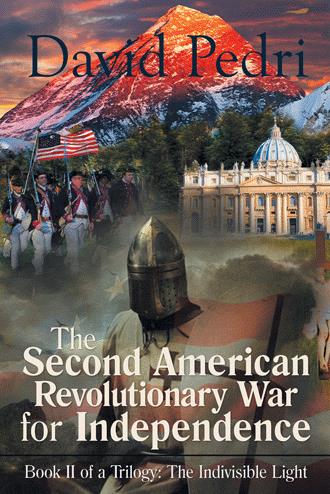 “If we don't sink these transports but only damage them, the delay in their mission for repairs may give us more time for defensive preparations in the populous eastern, southern and central states, but this will not likely be enough to save our nation; eventually, we will lose our precious, God-given liberties. Pray constantly for divine aid, success and protection during this entire mission. Christians should remember our miraculous, or at least highly Providential victory against the Turks at the Battle of Lepanto in 1571, when Europe was saved by its soldiers and citizens praying the Rosary. The Mohammedan fleet at Lepanto suffered thirty thousand casualties and the loss of many thousands of ships in one battle.”

David and a fellow Catholic led the Rosary over the little fleet’s radios, as they headed for the Chinese fleet at maximum speed. Each torpedo boat passed its respective Destroyer without incident. Upon David’s radioed command, all hands gave a stiff salute as they passed the stern of each warship at the same time, their stars and stripes flying. Boat commanders ordered all men to their battle stations as the giant transport ships began to fill their horizon. Shouts of alarm and fear went up from sailors on the Destroyers and soldiers on the troop ships as the white torpedo tracks emerged from the torpedo boats at a no-miss range. Per instructions, when the fifth torpedo was fired, the pilot did a big cookie to gain distance and position for a second launch of three more fish.

David and Michael raced up the line, shooting holes in lifeboats with the 50-caliber machine gun mounted on the bow. They tried to finish off those ships not sinking rapidly enough with their own torpedoes. To prevent a torpedo striking its target at too shallow an angle and glancing off the hull, they swerved out about one hundred yards to turn back for a perpendicular shot into the ship's hull. Every ship was floundering when the torpedo boats still afloat began their run for shore, the Destroyers and their missiles in hot pursuit. One by one, the small craft were blown out of the water by the U.S. Navy, using the ships’ formidable array of weapons, including helicopters. David's boat was hit twice by a pursuing Destroyer’s rapid-fire cannon.

Regaining consciousness but stunned, David felt a searing pain in his right thigh and chest. His life vest kept him afloat but swimming in any direction was difficult. He knew his bleeding would soon attract sharks, so he looked for a piece of flotsam that might support him above water. He tried to swim vigorously, blacking out twice because of the excruciating pain and the loss of blood. Then he saw five fins heading for him. The largest, a great white, cruised by him, within five feet. He had drawn his 45 from its holster and when the deadly beast came closer to him on its second pass, he fired a round into its head. It drifted off, trailing a bloody red wake. The other sharks trooped in line behind it, savoring the “aroma” of their next meal.

David thanked God for his rescue, as he reached a piece of his own boat’s hull, a jagged navy gray ‘washtub.’ Twenty minutes after jumping into this tub, an armed launch, one of the Destroyer’s motorized lifeboats cruised past, lined with sailors armed with M-16s. They were picking up survivors, but fearing a firing squad, David lay low in his floating tub, which bobbed about aimlessly for twenty minutes before he spied something that might work as a paddle. As he slowly neared it, he saw it move slightly and then more vigorously. He knew something was alive on the other end. He called out over the two-foot high swells, "Hello, hello.”

“Help!" It was one of his men; he paddled furiously with his hands, which were barely able to reach the water, once again coming close to blacking out from the pain. He could smell the thin, glistening diesel fuel slick that covered the surface, diminishing the wave action somewhat; then he saw the shark fins, everywhere!

"Help!" came the desperate shout again. It somehow sounded familiar to him. Finally, he reached the narrow plank, the ‘paddle’ he had been heading for. On the other end of it, in the water, he saw a bloody red human body thrashing around, white orbs for eyes, bloody arms clutching the plank. David leaned his entire weight on his end of the plank, raising the survivor up five feet until he could sit on a small platform above the water. The sharks had charged in as they saw dinner rise out of the water. The water boiled with their charge, only seconds after the bloody man had been raised from certain death. "Maybe the fuel slick kept them at bay," said the voice.

David, angry and indignant at those most hateful sharks who had threatened his best friend, fired his 45 into their midst. This instantly ignited the fuel slick on the surface. David helped Michael into his tub. They shared body warmth and found a piece of flotsam to shield them from a stiff sea breeze that steadily drifted them toward land. They examined each other's wounds and considered the trauma they would endure for even one day at sea, versus their chances as military prisoners charged as traitors or at least, ‘enemy combatants’ impersonating U.S. military personnel in order to attack its allies. They both decided to place their trust in God, not men. For the next two hours, they struggled to bind each other’s wounds and to stay warm. Finally, they found a piece of canvas they could hang on their “paddle” for a sail. This greatly increased their progress towards shore and aided by the wind and current drifting them landward, it was a considerable advantage over time. That night was long and cold.

The Second American Revolutionary War for Independence is Book II of my Trilogy, The Indivisible Light. It tells the story of a resourceful and heroic American patriot, David, Angela, his wife, and his right hand man, Michael, who come to know the diabolically inspired and directed Enemy, a vast array of fronts and tactics designed to mask their evil intention of destroying Christian civilization, especially America, the last bastion of liberty. With a determined confidence in God, the men lead the average, big hearted Americans in forming a militia that achieves victory with private arms, sharp wits and courage born of Faith. The reader is invited to fight alongside David in spirit and in imagination as our unflinching hero meets seemingly impossible odds that are, unfortunately, a frighteningly realistic projection of what America will face in less than a decade of this writing. Every woman will weep with Angela as she watches her husband and father of their children entering into harm’s way. They will pray with her for his return to life after news reports of his certain death are made public.

This is the story of war, its logistics and the fear of death, but most of all it is the story of hope, the necessary foundation of courage and daring, emotions of the irascible appetite, often accompanied by anger, their companion in facing arduous opposition.

David, a Wyoming resident, has authored four books. The present volume, The Second American Revolutionary War for Independence, is Book II of a trilogy, The Indivisible Light. David has a MA in Literature and Philosophy, with his master’s thesis written on the nature of creative writing. Father of 12, with 35 grandchildren, David was a Navy Medic in Vietnam with 1st Marine Reconnaissance.