An Intuitive MD’s Prescription for Health and Wholeness 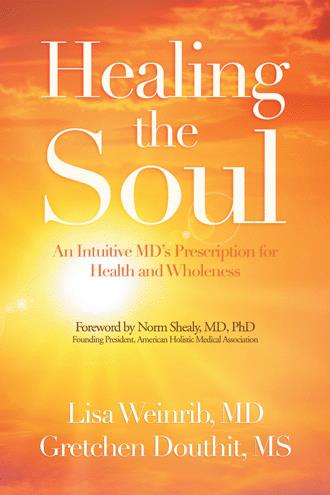 On the phone, the doctor sounded a little cautious and in shock at the same time. “I don’t want to say it’s a miracle just yet, but I’ve got to let you know that he’s moving his finger when I ask him to. That’s a miracle. That shouldn’t be happening.” It was only two days earlier that Andrea had a session with me for her husband Thomas. He needed a miracle. In fact, the whole family needed a miracle. Mysteriously, a month earlier he had started having seizures, one grand mal seizure after another, until there was no choice but to put him in a medically induced coma. The doctors were trying to prevent brain damage from the continuous seizures. He had been in one hospital, then another. The doctors had tried everything they could think of. Here is Andrea’s account of that time: What would happen is they would try all sorts of things, then say, let’s see if that helps, and they would start taking him off the medication that kept him in the coma, and he would start coming out of the coma, but every time they did that, he would start seizing again. The seizures were bad enough that they would put him back in the coma. They were freaked out that he would keep seizing and damage his brain some more… Then they’d try some more stuff, and do it all over again. It was like a yo-yo, trying things again and again. Nothing that they were doing was working – at all. All she could think of was that she would probably be raising their two little girls on her own. How could this be happening? Thomas was only 38 and had never had a seizure before this. Now he’d been in a coma for almost a month and the ventilator was the only thing keeping him alive. She was feeling more and more desperate. The doctors had given her only two options – either “keep him on the ventilator and the medications and everything that was keeping him alive in the comatose state” or take him off and “his brain will probably keep seizing … and it will basically fry him, he’ll just die, his body will shut down.” As luck (or God) would have it, Andrea had been raised by a mother who was a firm believer in Edgar Cayce, so she had been immersed in his readings and remedies since she was young. One day, just driving along, she wondered why things hadn’t “clicked” with Thomas. She was certain that she had been told intuitively he would be okay, and yet he wasn’t. In that moment she thought, “What would my mom do?” and immediately she knew the answer – call the A.R.E. Clinic. Nothing else had helped. Maybe she would find help there. She called and amazingly got an appointment with me almost immediately. Andrea remembers my saying something like, “I’ve been waiting for you. This appointment must be for you because it opened up.” Andrea walked into the clinic thinking that I would tell her what was wrong with Thomas so she could pass that information along to the doctors. However, that wasn’t what happened at all! Here’s what she recalls about our session: Dr. Lisa just did what she does and healed him from a lot of different angles. At the very end, the thing that I remember most was that there was an entity on him and some healing that needed to be done. But the big thing was that he had had some past life that had been just horrible, with him being decapitated in Roman times. She remembers me shuttering and saying, “Whew! That was an awful one…he put himself in a coma so it could be healed. He couldn’t heal it himself. Whatever it was was so confronting that he put himself in a coma so it could be healed through me.” Andrea continues: Dr. Lisa said something like, “We need to rewire his brain because it’s fried.” She brought in whatever; I can’t remember what the entity was. I remember her saying, “Wow! Did you see that?” I hadn’t seen anything. I don’t know what she saw, but she said it was like zipping light everywhere. Whatever it was, they rewired his brain. They did what they needed to do to rewire his brain from all the seizures. Then she snapped her fingers and said, “Okay. He’s good to go.” But Andrea needed answers, something to tell the doctors: I said, ”Okay, now what do I do? What am I supposed to tell these people.” Dr. Lisa said, “You don’t have to worry about it. Pearls of wisdom will come from your mouth.” I left there feeling kind of rattled but also peaceful. That didn’t make any sense. She didn’t tell me what to tell them! Andrea had something else to guide her – her own intuitive sense about Thomas. Her own intuition had been heightened through my work. Here’s how Andrea describes Thomas before and after our session: I’d go to the hospital, and I just knew. He wasn’t there. After the session I could sense him around me, like he was ready to come back. It was a very strong presence. So I just told them to take him off the medication. He was ready to come back in his body. He was ready to wake up. They asked, “Are you sure?” I was sure. I felt him. About two days later a doctor called me and said, “I don’t want to say it’s a miracle just yet, but I’ve got to let you know that he’s moving his finger when I ask him to. That’s a miracle. That shouldn’t be happening.” I said, “Good.” After that he just kept getting better, and he came out of it. He came out of it!! He did a few months of rehab since his body was “kaput,” and then he went back to work! No more seizures!

Thomas had been in a coma for almost a month. Nothing the doctors tried had worked at all. His wife had been given no hope that he would survive. Living in a hospital unconscious certainly wasn’t a long-term solution. The only other choice was to bring him out of the coma, let the continuous seizures “fry” his brain, and let him die of brain damage.

A few months later, Thomas was back at work and back to being the devoted husband and father he had always been. For years now, he has been free of seizures and leading a normal life.

What happened? What caused the change?

Dr. Lisa is what happened!

In these pages you will read the fascinating stories of Thomas and many other people who have benefited from Dr. Lisa’s healing work. You will be given spiritual resources and earth remedies to use on your own, as well as guidance on accessing your intuition.

Lisa Weinrib, MD is a Board-certified physician who became frustrated with her traditional practice and left it to pursue holistic healing. She considered herself “almost agnostic” until she had a life-changing spiritual awakening. After that, she devoured information about spiritual healing and intuitively incorporated the best of those techniques into her work with clients. She has obtained amazing results, helping people with everything from financial and relationship problems to physical complaints and finding their life purpose. For several years she worked at the A.R.E. (edgarcayce.org) Clinic in Phoenix. Her website is www.intuitivemd.com.

Gretchen Van Kleef Douthit, MS is a licensed professional counselor, author, spiritual seeker, A.R.E. (www.edgarcayce.org) volunteer, and world traveler. She has been on an amazing journey since meeting Dr. Lisa! Her books for young people are Inside Out (a workbook) and So Many Secrets.