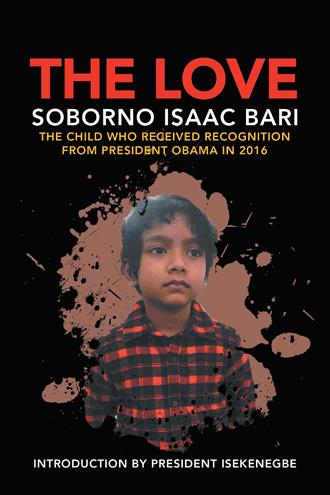 FOR IMMEDIATE RELEASE Sub: The Love: A Book to Create a world without terrorism written by 6-year-old Soborno Isaac who received recognition from President Obama in 2016 and Harvard University in 2018. The Love, a book written by six-year-old Soborno Isaac, aims to create a world without terrorism. The book is based on two events Soborno experienced. First, he asked an imam to pray for America on the eve of the 4th of July, but the imam refused to do so, documented in the film I’m a Muslim and I Love America. Second, he saw a man repeatedly hurl insults at Christmas tree on Christmas Eve, documented in the film I Love Christmas. Often, ideas from children like Soborno go unnoticed or are ignored. However, Dr. Thomas Isekenegbe, president of Bronx Community College, refused to ignore Soborno Isaac’s talent after conducting a series of interviews with him. Below is the foreword President Isekenegbe wrote for Soborno’s book: Soborno’s Reaction: The world has seen many revolutions, including the French Revolution and the Bolshevik Revolution, but this revolution, The Love, is more important than either revolution because it is based on two principles. First, humanity is more important than religion, and, second, love is stronger than hate. I hope President Isekenegbe’s introduction to my book will spread this revolution to the entire world in order to eliminate terrorism. About Soborno Isaac: Six-year-old Soborno is a student in a New York City gifted and talented program. He received the title “Einstein of our Time” from City College of New York President Dr. Lisa Cioco. In 2016, he became the second Bengali (Dr. Yunus being the first) to receive recognition from President Obama for his ability to solve Ph.D.-level math, physics, chemistry, and computer science problems. He has received recognition from many universities around the world, including Harvard, the number one university in the world. The Love is his first book.

The Love is a book about Soborno Isaac Bari, a four-year-old Muslim child who launched a campaign to create a world without terrorism. The book is divided into two parts: (1) Soborno’s fight with Imams to change their perception on non-Muslims and (2) his fights with Muslim Americans to denounce terrorism and be patriotic. Millions of people joined his campaign across the world—especially people in Bangladesh where two young Muslim students, Sadiyan Lima (Dhaka University) and Marjia Farzana (Jahangirnagar University), led the movement on behalf of their respective universities. It inspired many people, including Zahid Hossain and Safir Biplob and his son, to stand against the terror of the Islamic State. Zahid published Soborno’s biography, while Safir and his son went to 64,000 villages in Bangladesh posting 64,000 posters. Meanwhile, Uday Bengali made a documentary, I Love Christmas, which created an anti-terrorism movement around Bangladesh that is based on the philosophy of Soborno.

Soborno Isaac Bari is a six-year-old student enrolled in gifted and talented program in New York City. In 2014, Dr. Lisa Coico, president of City College of New York, gave him the title “Einstein of our time.” In 2016, President Obama gave him recognition for being able to solve advanced math, physics, chemistry, and computer science problems. Sir John Bercow, Speaker of British Parliament, wrote, “I would like to congratulate Soborno Isaac for his remarkable academic achievements which have come to the attention of such luminaries as President Obama and Dr. Lisa Coico, amongst others.” On May 2, 2018, Soborno Isaac received recognition from Dr. Drew Gilpin Faust, the president of Harvard University. Soborno Isaac is currently working on two projects: he is creating Nazrul, which is a humanoid robot, and collaborating with Dr. Daniel Kabat, an MIT (The Massachusetts Institute of Technology) scientist, on a new book titled The Black Holes