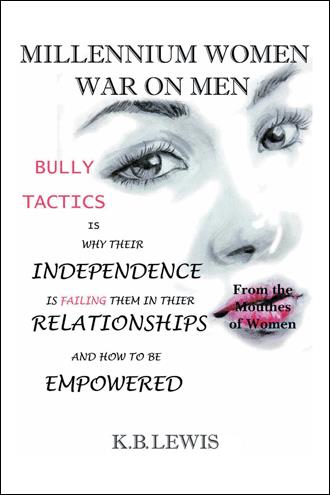 This book was written in order to reflect back like a mirror— to bring awareness of the (BULLY) attitude that many Independent women have with the men in their lives—an attitude that they may or may not be aware of, which is destroying and failing them in their relationships with men.

I wrote this book because I was going through a relationship break up in the late nineties and early two thousands, and my ex wife at the time told me that “If we get back together then I will feel like I would lose my Independence”. I was bewildered and puzzled by her statement. I asked her what did she mean by that statement and she couldn’t give me an answer. She said that it was just how she felt. I wasn’t angry or bitter at her. However, I wanted to know what did that strange statement mean. So I set out on a quest to find answers as to how women came from being Dependent to Independent and the effects that it has on relationships. I am business man. I graduated at Unilex college in San Francisco in business. I’ve owned my own business since 1991. Over time I owned a couple of service based businesses which put me into customers home. While inside the homes I would notice that there would be single women or mothers but no man living with them. It didn’t matter the economic background (high income or low), it didn’t matter the race, it didn’t matter the neighborhood. I got the same exact answer from each woman I talk to. I ask the same question to each woman and they all gave me the same or similar answer. The question was—Where is the man? I would get the same answer almost verbatim. They all said. “I have my own house, my own car, my own money, I’m an Independent woman and I don’t need a man for anything” I thought to myself that that’s no coincidence. So I set out on this quest to research this situation because it so deeply effected my own personal experience. So I talk to every women in every house I went to, and every woman I encountered at the gym and even on the street. I talk to thousands of women over the years to get this research for my book. The main point that struck me was that nobody had done any research on how women came from dependent to Independent. A major paradigm shift and what was the effects. I talk to and researched my work through several psychologists and relationship therapists and I found out that this paradigm shift was unheard of even to them. I had a burning desire to get answers to my questions. One major thing that I discovered through my research from talking to thousands of women was that I found the three sides of Negative Independence which contradicts and neutralize the positive Independence that we all hear about with Independent women. I have had an intensive, relentless pursuit and discussions with thousands of women in relationships over almost two decades. Ive read countless books on relationships. Why they fall apart and how to fix them. I’ve talked to, and discuss with numerous relationship therapists and psychologists to get into the mind set of Independent women and men regarding relationships, and I’ve had two failed marriages with Independent women so I have walk the walk not just talk the talk. My life experience has qualified me as an expert on the mentality of Independent women’s relationship issues and the paradigm shift that they have unknowingly encountered.