My Emmaus Walk Through Stormy Waters 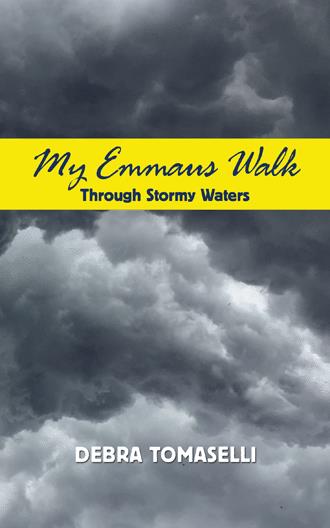 I’ll never forget the day my mother returned from the hospital carrying a tiny bundle. I was jumping up and down, just as eager to see mom as to meet my newborn brother. Mom suggested I sit down, and I scrambled onto the sofa. There, she showed me how to cradle my arms, and, hovering gently, she slipped my little baby brother into my embrace. I was four-years-old when Jim was born, and to me, he was a living doll. He found his way into my heart and remained there. Jim and I grew up together, riding tricycles and building forts, running sprints and playing softball. Our final embrace occurred thirty-three years later, when he succumbed to kidney failure. Once again, he was in my arms, but this time, he left this world. His death infuriated me. “Why!” I shook my fist at God himself. “How could this be? God forbid this could happen to Jim.”

For months, I cried. I felt defeated. I doubted my faith in God. I couldn’t believe anything good could come of losing my beloved brother at such a tender age. Strangely, as much as I rallied against God, the only place I felt comfort was at Mass. Ultimately, searching for rest, I began reading my Bible. And in Matthew 16, I discovered the apostle Peter and I had a lot in common. Jesus had just finished feeding the multitudes with a few fish and a couple of loaves of bread. Life was good, miracles were happening. It took only a scene or two later for Jesus to confide in his disciples that he would go to Jerusalem…and what would happen to him there…that he would suffer at the hands of the Jewish leaders, that he would be arrested, beaten and killed. That he would rise from the dead three days later. Maybe some of the disciples didn’t hear what the Christ said. Maybe some didn’t understand. Peter, however, bristled. His back stiffened, he clenched his fists. He took Jesus aside. “Heaven forbid,” Peter grumbled. “This is not going to happen to you!” Of course! Who wouldn’t feel like Peter? Nobody would ever want bad things to happen to someone they love. If I were there, I would have jumped on board with the disciple. After all, that’s exactly how I felt about my brother. Annoyed. Confused. Appalled. Why did that happen to Jim? Heaven forbid…

I kept reading the passage and discovered Jesus offers an unexpected reply to Peter’s retort. At least, I was surprised at Christ’s response. The Savior turned sharply. He squared his shoulders and stared at the disciple. Then he spoke. Listen to what Jesus says. He delivers the message, not just to Peter, but his voice echoes throughout the ages. His reply is directed to you and to me. His reply set me free from the negativity that clouded my grief. Listen: “Get away from me Satan. You are seeing things merely from a human point of view, and not from God’s.” Matthew 16:23

I tapped the steering wheel, waiting for the light to change. What was taking so long? The interstate looked deserted when my sole vehicle finally climbed the ramp entrance. What’s going on? I merged into the desolate lanes, suddenly realizing why there was no traffic. It’s Easter Sunday! On Easter, the whole world is home celebrating with family and friends. They’re enjoying egg hunts, ham dinners, and chocolate Easter bunnies. My heart sank, realizing it was a holiday, and everybody was having fun. Everybody, that is, except me. Instead, I was going to visit my beloved brother in the hospital. Kidney failure was threatening his life. A knot formed in my stomach. I gripped the steering wheel. I held my breath. This isn’t fair. I wiped a tear from my eye. This absolutely stinks.

I felt scared. Jim’s condition was critical. Why was this happening? At age 33, he’s supposed to be enjoying life, not fighting for it. Nobody else was sick. I felt alone. My husband was my strength. He was my rock. But today, he had to stay home with our young daughters because children weren’t allowed to visit patients in hospitals. Why did I have to face this alone? I felt confused. Knowing Jim’s life was threatened heightened my fears and intensified my loneliness. Dialysis might have helped, but Jim couldn’t tolerate the treatments. Why was this happening? Why him? Why me? My perfect life was shattered with the news of Jim’s terminal diagnosis. Everything I formerly valued, including a loving husband, three charming daughters, a beautiful home, a desirable neighborhood, and financial security could not pacify the inner turmoil and distress of losing my beloved brother. Floundering in a sea of sadness and confusion, nothing strengthened the crumbling walls of my spirit…absolutely nothing…Not a nice dinner out…Not a new outfit…Not a big business deal…Not even a new baby… Nothing. I was lost and did not know where to turn. When I arrived at the hospital, I parked my car and hurried into the facility.

The hospital’s lobby was bustling with activity. There were doctors in white coats and nurses with stethoscopes, coming and going. There were patients in wheelchairs and visitors carrying balloons and flowers. Some had smiles, some not. In the chaos, I noticed a calm, serene figure walking by. His peaceful presence caught my attention. He was not part of the frenzy. He wore black slacks and a black shirt with a clerical collar. I realized he was a priest. At the time, I’d been away from the church. I didn’t know any clergy by name. I certainly didn’t know this particular minister, nor did we exchange glances or even say hello. But his mere presence touched me. Unbeknownst to him, his presence floated a wave of peace over me. His calm demeanor blanketed my trembling spirit. It was as though Christ himself had walked by, permeating my very soul with a lingering serenity that couldn’t be found anywhere else… From then on... I knew where to turn.

The name of the Lord is a strong tower; the just run to it and are safe. Proverbs 18:10 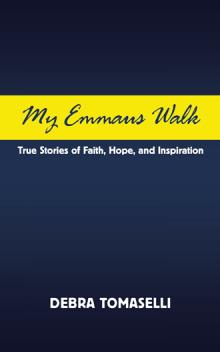 Have you ever wondered if God is real? Questioned your faith? Lost a loved one? Battled cancer? Hoped for a reason to sing in the storm?

This book, My Emmaus Walk Through Stormy Waters, contains stories of the author's struggle through two big storms in her life - grief and cancer.

Discover how the foundation of faith that helped her navigate grief following her brother's death now provided freedom from fear when she was diagnosed with cancer. How it changed her perspective, delivering positivity. How she discovered joy, even in the thick of battle. How she found peace in the chaos.

It's a love story. A story of God's love for us, and our love for God.

Debra Tomaselli is an author and columnist who inspires readers with true stories about the extraordinary presence of God in our ordinary lives. Her column, The Emmaus Walk, has been publishing since 2003. Her first book, My Emmaus Walk, True Stories of Faith, Hope and Inspiration, is a collection of those works addressing everyday events of our lives. This book, My Emmaus Walk Through Stormy Waters, is just as poignant and personal. It includes stories of conversion, finally connecting the motions of her faith to the everyday living of her life. It includes stories of the remarkable circumstances and revelations she found during two big storms in her life - the death of her beloved younger brother - and her battle with cancer.