I Encourage You to Live 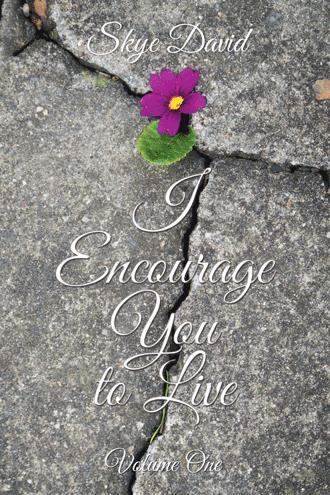 Unedited material: I was always different and made fun of for just being me. I struggled through addictions and bad relationships and started to proclaim death on my life. I woke up drinking, as many times I prepared a bowl of cereal with White Russians instead of milk. I drank brandy and snorted pain pills on breaks at work. I went back home to change clothes and go out to find random men to lay with each night. I was insatiable with sex and I did not care who I got it from or their circumstance I was only thinking about lust and perversion. I dabbled in witchcraft and I told myself I was only a pair of legs because that is how my history was and this should now be my expectation in life. I exposed my soul to hell and continued because it made me feel invincible. About a decade ago, I met a man who I loved for a few years who ended the relationship wounding me physically and spiritually and I decided to come back to Arizona not too long after the relationship ended. I went to three other churches who knew me as a child but no one sensed the hell I was living as a functioning alcoholic, hitting the club, always angry, sleeping with a team of men and caring so much less about my life. My children had to suffer through some things that no child should ever be exposed to and it has caused trauma in his way of thinking. Then I met a man who took me with him to church one day and I met some angels. I went up to go get prayer and God spoke to me through my pastors. I knew people were assuming Prophetess was speaking to me about a tattoo on my shoulder but she was really telling me about the demonic tattoo I have on my left leg. The pastors instantly took me in as one of their own children and have never treated me differently to this day! God had bigger plans in store for me. In May 2013, I gave my life to Jesus to begin a journey that I did not prepare for and soon suffered an attack from the devil. A few years after, I told God yes I’ll go do what you have called me to do and I joined Mime ministry. Later that year in July, I broke my foot in two places a while practicing for a song that had to be ministered the following Sunday. The sad thing is that God only did it to put me in my place, a higher place. I had now started to feel what it meant to fast, to depend on people I don’t trust to even hold my water and it opened my eyes to see how many people close to me hated to see what I sacrificed for ministry. God told me that summer to write this book. Each section has brought me through a trial, as God knows it is best to write from experience. There is nothing written here that I have not experienced. It took much longer than what I was told because I tried to shorten what God gave me to say. I also failed so many tests from God and I could not write until my heart was changed. Some people look at me and do not think that I may understand what it is like to choose death over your children because it was an addictive lifestyle. It took many people to war for the change in my soul and I am so thankful that God placed people in my life who pushed me. I am so thankful to the people who motivated me and the people that the devil put in my path because I am stronger for every experience.

ABCDEFG, HIJKLMNOP.... “And you will know the truth, and the Truth will set you free.” (John 8:32) Are you living your best life the way God intended? Are you looking to grow in your walk with God? Maybe you have strong faith, but could use more understanding on reaching your destined calling. Well then I encourage you to live! Volume one has seven intense and helpful concepts that will cause you to live abundantly. Prepare to know the truth and be set free from the bondage holding you from accessing God to the fullest potential. Each chapter contains honest and at time graphic testimonies to be transparent that even ministers can have ugly pasts. I have no secrets about what I have experienced because it caused me to live stronger than I thought was possible. It made room for Freedom to unlock my destiny as an encourager. Remember, you can make it and will make it through every trial and hardship!

Skye David is an entrepreneur that has a heart to help people. Skye realizes she is a gifted encourager and has chosen to lead a life of unconditional love and limitless wealth. Skye has now devoted her life and time in Ministry to focus on freeing those with a mindset to live bound spiritually, physically and financially.