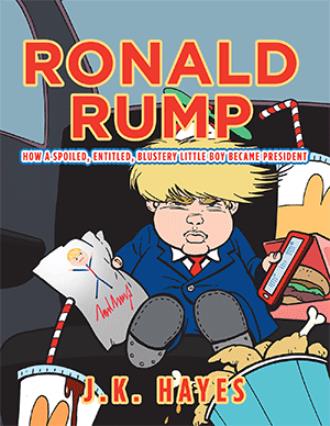 Ronald Rump, How A Spoiled, Entitled, Blustery Little Boy Became President is a book that examines the political conditions in the United States that enabled the election of an inept, inexperienced, egomaniacal narcissist. The story is written and illustrated in the format of a children's book intended to remind readers about how we elected a person so incredibly unqualified for the office of the president.

The political context for this book highlights the strategic decision of the Republican Party to intentionally withdraw its participation from any Obama initiatives and actively obstruct his ideas for short term political gain. Additionally, the book points out the Democratic Party's inability or unwillingness to embrace, advocate, or explain Obama era policies.

Congressional approval during the Obama administration was at an all-time low. Political infighting, fiscal cliffs, and government shutdowns, amplified by a media that calculates winners and losers rather than policy and outcomes, became the new norm. Because of these forces, Trump was elected.

Further, the book reminds us of the speech and tweets of Donald Trump. His vitriol went unchecked by elected leaders and normalized a tone that undermines our values and ideals. Many of the elected leaders in Washington D.C. have put grandstanding, gridlock, and their own re-elections ahead of doing the peoples' business.

J.K. Hayes is an educator and political enthusiast. He is an average American voter who is frustrated with our current political climate. What began as a letter he was writing to President Obama expressing disappointment with our politics became something he thought might have broader appeal – an illustrated story. Despite our current political gridlock, he believes our democracy can work. J.K. imagines a congress, held accountable by its voters, doing the peoples' business. He thinks that our politics is broken, but he believes we are so much better than this. Dedicated to everyone who thinks we can do better.