On Christianity, Family and Fiction 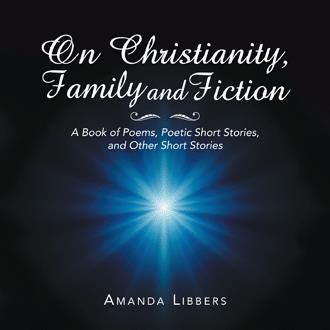 From Hijacker and the Buttons: The next thing Hijacker knew he was handed to young women. He was placed in a bin. He was then rolled to a 1946 Ford. He was neatly stacked among piles of linen. The lady got in the car and began driving. All of the sudden Hi-jacker spoke his first: “I was born to be a rebel!” “Oh yeah!” remarked afflicted, another button. “We are doomed to sit on a gown in the closet for 50 years until we fall off and are lost, and we would be forever in torment!” Then Hijacker remarked “I am not going to live like that! Mark my words! I am going to be a free button! You just watch! One day we will meet again!” “Well I am going to be a holy button.” Remarked Boss another button. “Oh yeah!” cried Ginger a fourth button. “Does that mean you want cracks in your holes so you can die a martyr!” “I will but in God’s timing.” Said afflicted. “Oh, shut up!” cried Pinky. Pinky was named Pinky after the silky pink thread that was inside her wholes. “I dream that one day I am going to be in a beauty contest and I will shine on forever!” “We ought to form an alliance.” Retorted Hijacker. “All we need to do is find each other once we have escaped our christening gown and make sure our visions for our life are achieved. As for me I was born to be a rebel and I will get what I want by any means necessary! I do not need a vision beyond what I want or some God! From the Hippo That Was Loved Again: “I may be old but I can still be hip! It’s time to put the fruits of the spirit to use! It’s time to use our evangelism skills!” “It’s time for: Faith busters!” Faith busters is what little hippo and gray hippo said in unison, for they both had long since developed a relationship in which they enjoyed evangelizing together and spreading the word of God together. Gray Hippo and little Hippo both swam out of the little Erie cave mouth, where Gray hippo lived and headed for Grand hippo’s home on the other side of black tar ravine in the swamp. Gray hippo secretly did not tell little hippo that he was sacred to go on their venture to witness because he remembered that black tar ravine was an old familiar place that originally lead to his undoing.

On Christianity and Family and Fiction is a collection of poems, short stories, and poetic short stories with themes relating to Christianity and family. This work aims to demonstrate Christian values and life lessons such as witnessing for Christ, encouraging others in their faith journey, and remaining strong despite being persecuted for one’s faith. If you believe in Christian virtues and family values, this combination of serious work and light entertainment is a must read!