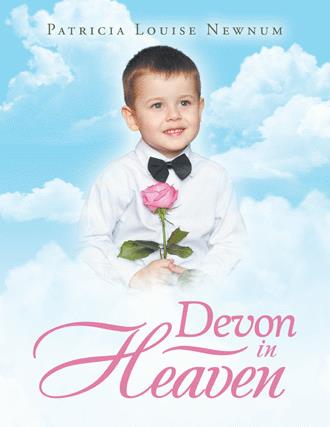 The book Devon in Heaven was written because one of the most devastating circumstances in a parent’s life is the death of their child. At no time is a word of encouragement more needed. This book contains a fairly lengthy poem designed to provide support and healing for parents, knowing that not only is their child in heaven but also is having a much-better time (even a lot of fun) with God and the angels. The author has included several enjoyable moments, which show happiness and joy in heaven, while he is • chasing a moonbeam but sliding on a heavenly rug; • chasing a puppy he loved; • listening to beautiful flowers, which call his name and sing; • getting food from the heavenly kitchen, along with ice cream and cake, including seconds; • petting lions, tigers, bears, and other animals in a zoo, which needs no bars; • climbing trees more easily as he grows bigger; • enjoying heavenly kindergarten; • fishing and catching frogs; • saving money, along with a friend, to buy a heavenly sled; and • enjoying the Holy Spirit, a real cool guy. Words of encouragement are also included for each of us to receive Christ into our hearts and to help others. Everything in the book is to encourage any parent in this time of need.

Patricia Louise Newnum, commonly referred to as Patti, was born as Patricia Louise Kelley in Indianapolis, Indiana on January 27, 1942. Patti has indicated she had a happy childhood living in and around the city. Her memories included living near Brookville Road and Post Road where her mother and step-dad ran a small filling station. One of her fondest memories there included where she said, "I slept behind the candy counter." Later, as Patti approached her mid-teens, she decided she was going to be married to Alvin Pitts. Patti, and Alvin were married three days after she turned 16 years old. They had three children: Alvin Joseph, Steven Louis, and Patricia Yvonne, commonly referred to as Angel. Patti was in a high school choir right before her marriage. Whether the choir conductor wanted to encourage her to stay in school or for whatever reason, Patti understood her to say, "You will never be able to sing parts." Nothing could have been further from the truth! Patti later started her family Gospel groupt harmony. They sang often at Wheeler Mission along with several other places around Indiana, travelling as far as Illinois. She also has sung with other Gospel groups, singing solos, to many people for over 50 years. At the age of 23, Patti heard someone reading from the Bible, and it seemed to make more sense to her · than before. She then got up, walked up the stairs to her room, and told Jesus, with somewhat an indignant attitude, "Jesus, if You're real, let me know You better than I know anyone or anything else." Patti said she left that room a completely different person. Near the time Patti was working for a sales advertisement paper, she became friends with Sandy and her daughter, Jessica, who happened to be one of her co-workers. Only too soon, she became aware that Jessica had tragically lost her son, Devon, after being run over by an automobile. Sandy {Memaw), Jessica, and her sister, April, showed great faith in dealing with such a terrible loss. Patti then decided to write a poem to provide comfort for the family. Actually, the poem turned out to be long enough to become a short book. It is our hope that the poem you are about to read, Devon in Heaven will provide peace of mind to others, especially to those who have lost a child. On February 16, 2002, Patti and I were married and along with AJ, Steve, Angel and my daughter, America, we became a bigger and happier family. Ronald Newnum