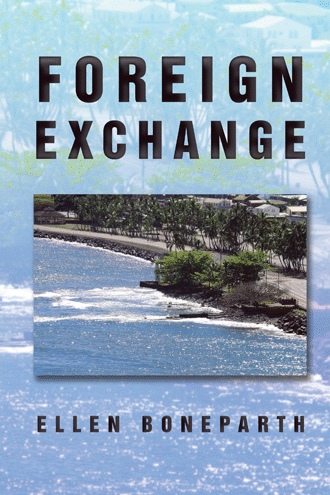 Chapter 1 A rare day for Hilo, Hawaii, a town nestled in the Big Island’s rain forest. Toasty sunshine had burned off the morning fog, leaving the university’s lime green lawns sparkly and the spiked leaves of tropical plants glistening along campus paths. The sky was clear enough to reveal the snow-covered summit of Mauna Kea volcano. As she made her way up the path to the chancellor’s office, Andy Perry stopped for a moment to pull down a branch of a plumeria tree and inhale the sweet, musky scent of its pink blossoms. The island’s many astounding environments had a magnetic appeal for Andy. She couldn’t get enough of the thick, lush rain forest, the wild spills of lava around the volcanoes, the shimmering life of vibrant corals and tropical fish in the ocean. When she’d escaped San Francisco for a Hawaiian sojourn, she’d had a picture only of Waikiki in her head, a long sandy beach, gentle waves, tourists paddling around on surfboards. That was domesticated Oahu, not the native, largely primitive Big Island that became her home. She’d never imagined the grandeur of its 13,000-foot volcanoes, its deep, fertile valleys, barren, windswept plains at higher elevations, myriad waterfalls tumbling off lava cliffs after a deluge of rain. She felt blessed to have landed on the Big Island, home to one of nature’s richest treasure troves. If only she felt as blessed about her job. On the positive side, she adored interacting, as the university’s Foreign Student Advisor, with young people from East Asia, the Pacific Islands, Southeast Asia and South Asia. Asian cultures were new to her and fascinating in both their dynamism and grace. And she felt she made a real difference in helping foreign students manage academic challenges, the university bureaucracy, and American ways that were strange to them. That was the good news. On the negative side, she was working with university administrators who had little concern for the foreign student program and little motivation, much as she tried, to go along with changes that would make the campus more appealing to foreigners. She had come up with many ideas to increase interaction between foreign students and faculty as well with their American peers. Every new proposal met either resistance or disinterest, except for the few professors who believed a foreign exchange program was good for the campus.

Andy Perry, female foreign student advisor at the University of Hawaii, Hilo, loves her job, but not the university bureaucracy she must deal with. She discovers an attempt by leaders at the top to turn the foreign student program into a cash cow that will fill the pockets of certain administrators and turn the foreign exchange program into an elitist and dangerous offering for visiting students from Asia and the Pacific. With the help of one of her mature foreign students, a close colleague on the faculty, and a principled dean, Andy Perry exposes corruption in the form of a complicated bribery deal and helps to expel the bureaucrats scheming to exploit the university.

Ellen Boneparth has written a number of novels that feature a heroine who encounters violations of social norms and attempts to expose them and bring the perpetrators to justice. FOREIGN EXCHANGE, based in Hawaii, highlights unethical behavior by a group of corrupt university administrators seeking to exploit a student foreign exchange program. Boneparth lived for six years on the Big Island of Hawaii in the early 1990s and explored the island’s environment with great joy, both on land and in the ocean.