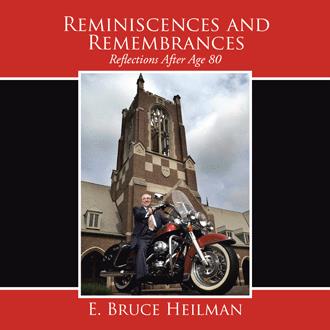 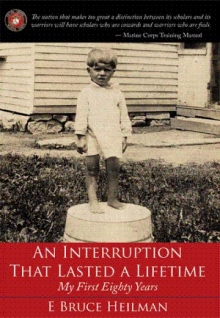 An Interruption That Lasted a Lifetime
E. Bruce Heilman
$29.99

This is the continuation and in-depth view of my previous book, An Interruption That Lasted a Lifetime: My First Eighty Years.

E. Bruce Heilman has been Chancellor at the University of Richmond since 1988 after serving as President and Chief Executive Officer for 16 years. Having failed to pass enough courses to meet high school graduation requirements, he joined the Marine Corps during World War II following which he was educated under the GI Bill at Campbellsville College and Vanderbilt University. A respected educator, administrator, and much sought after speaker and consultant in higher education, he has served on numerous boards of educational, religious, and non-profit organizations. Among other numerous activities he currently serves on the Board of the Robins Foundation, the President’s Advisory Council of the Children’s Home Society of Virginia, is a Trustee of Campbellsville University and William Jewell College. In addition, he is an Honorary Trustee of the Boys Home of Virginia. Among other awards he has received Honorary Doctorates from 12 colleges and universities as well as named buildings on three campuses. His varied leadership experiences in Higher Education in four states has included every defined administrative position including Coordinator of Higher Education for the State of Tennessee, and President of Meredith College. A Marine "once and always" he is National Spokesman for The Greatest Generation Foundation and The Spirit of 45. He is a founding member of the National Museum of the Marine Corps at Quantico, a member and former Chairman of the Board of the Marine Military Academy in Texas, Member and Chairman of the Board of the Marine Corps University at Quantico, a Member of the Board of Directors of the Virginia War Memorial Educational Foundation, and served for many years on the Board of the Marine Corps Heritage Foundation, and is an emeritus board member of The Families of the Wounded Fund. Among then numerous awards he has received, he is also the recipient of the Superior Public Service Award from the Department of the Navy presented to him by the Commandant of the Marine Corps. In addition to his experiences as a Marine in World War II in the South Pacific and Japan, Dr. Heilman has traveled extensively, covering more than 145 countries, escorting travel groups annually for over forty years. In recent years he has rediscovered his passion for motorcycles and has covered all 50 states since his 83rd birthday. He has also ridden cross country, coast to coast, in the past two years representing The Greatest Generation, Gold Star Families, and The Spirit of 45. He and his late wife, Betty, have five children, 11 grandchildren and 9 great-grandchildren. All the children are University of Richmond graduates as are nine of the grandchildren as are three sons-in-law.