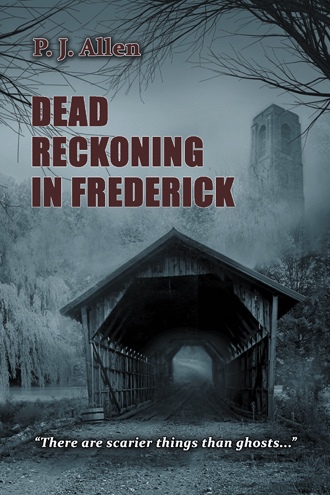 We who are beyond the mortal world see many things from the edges; we hear subtle shifts of rhythm in the beat of a blackening heart.” Emmanuelle du Maupassant Kayla got up the next morning and after feeding Fritchie went for her early jog…in the Mount Olivet Cemetery. She still hadn’t been able to return to Baker Park. This was okay for now, or from now on, she thought. She had easily rationalized going to Beacon’s Way against Parker’s order. What did he think anyway…that the image was made of uranium? There was nothing about the image that frightened her. Kayla just wanted to confirm that if she walked around it, it would follow her, so to speak. In other words, that it was a true trompe l’oeil. If so, it could be an important message. And indeed, as she returned to her house, Kayla believed it was going to be such an image. Kayla was headed to her car when she suddenly stopped. She turned, went back into the house and picked Fritchie up. “You like the dark room Fritchie?” she asked. The cat purred loudly. “Why don’t you stay there today? Enjoy yourself. I’ll be back.” On her way to Beacon’s Way Kayla thought about her plan. She would simply unlock the front door, walk in and lock it behind her. She’d been there many times, so it should not look suspicious to any of the neighbors. And besides, those houses were quite a distance away from Beacon’s Way due to the large swath of land the house sat on. Kayla parked a block before the house and walked along the sidewalk until she reached the walkway up to Beacon’s Way. Though the chances were nil, Kayla wouldn’t want Henry or Parker to see her car in front of the place. When she entered the kitchen, Kayla noticed immediately that one of the back door’s window panes, the one closest to the door knob was broken. Had someone else been in the house? Was someone there now? She reached into her back pack for her phone to call Parker, but then decided that would be unwise, very unwise. Kayla would check it out herself instead. She opened the back door and stepped out to examine it. Crunch! She looked down; there was glass everywhere. Kayla examined the door to see if someone had tried to break in before breaking the window, but it did not look like it had been tampered with. Something was bothering her, but she couldn’t place what it was. Kayla re-entered the kitchen and looked around. Nothing. Though she still didn’t mind checking out the cupola, she was not going to go to the basement. For one thing, she had no light. If someone was down there who wanted to pose any harm, she’d be defenseless. Kayla checked to make sure the door to the cellar was locked from the kitchen’s side and then proceeded to the grand living room. It was as they had left it. Next, she went up the stairs, bypassed the master bedroom all together and continued to the cupola. Kayla stopped at the doorway and glanced in. Everything looked the same. She took off her backpack and pulled out a small manual camera. Then she entered the room. Whoa! It was freezing. The minute Kayla had crossed the threshold she was struck with a 20 or 30 degree drop in the temperature. That wasn’t all. As she perused the room, Kayla saw that the ceiling had tiny icicles hanging from it. She glanced over at the painted figure. It looked the same except that an icicle dripped from the eye. Kayla stepped around the footprints. It WAS three dimensional. Kayla was truly frightened. What was going on? She started toward it, again avoiding the footprints. She wouldn’t get too close. As she traversed the space she confirmed that it was indeed a trompe l’oeil image. Well done. She started snapping new photos. Suddenly, an arm reached out toward her; fingers grasping. Kayla screamed. It was fleeting. Its moist essence passed through her and returned to its original position. Kayla raced out of the room grabbing her backpack as she dashed down the stairs. She stopped at the bottom. Her heart was pounding and she could feel her entire body shaking. She sat down on the last step and hugged herself. Had that really happened? It had. Kayla knew it had. She’d felt it. Kayla had seen it for God’s sake. As she started to calm down Kayla began to analyze the situation. Had the entity meant her harm? She didn’t think so. It was more a gesture, a beseeching. It was pleading. It wanted to tell her something. What it wanted to convey, Kayla didn’t have the faintest idea. She thought about going back up, but the idea frightened her too much. She couldn’t. She should, but she couldn’t. Uh oh. Had she messed up the floor? Kayla was sure she had when she ran out. Damn. As she sat thinking, more paint fell from the ceiling onto her body. She unconsciously brushed it away. Then it dawned on her. She could practically feel the place breathing, gasping. Kayla decided it was time to get out. She stood up, placed the camera which she was still clutching into her backpack, slung it over her shoulder and started toward the back door. When she entered the kitchen, the light had changed slightly; enough to accentuate other parts of the room. That’s when the uneasiness that had affected her earlier re-emerged. Kayla now knew what was wrong. There was no glass on the floor. No one had broken in. Someone had wanted to get out. 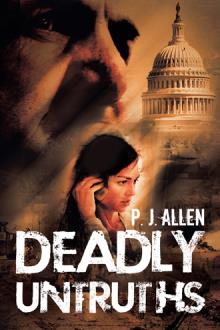 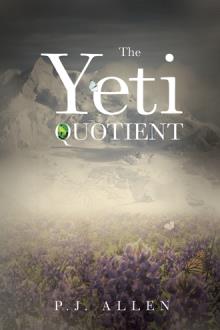 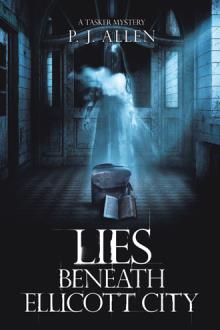 When Kayla Dunn, photographer for the Dulany Paranormal Team, discovers a murdered girl in Carroll Creek, no one believes that there is any connection between the victim and the team’s challenging assignment from the Frederick County Landmarks Foundation. As paranormal activities continue to increase in Frederick’s heritage homes and buildings, it becomes apparent that the spirits have a message, which arrives in the form of a trompe l’oeil, a three-dimensional painting meaning “to deceive the eye.” Nick Nucci, the detective assigned to the murder case begins to work with the team after Kayla’s photos reveal a live person lurking among the shadows belonging to the spirits. He is able to uncover a web of transgressions that point to secret business dealings reflecting misdeeds of long past. Because of the mixed history of slavery and abolition and the strategic location of Frederick, Maryland, during the Civil War, many residents fought and perished, carrying both guilt and passion into the afterlife. Now spirits of the past have returned to haunt the present, revealing a shocking secret worth killing for and to summon a reckoning in Frederick.

P. J. Allen is a resident of Frederick, Maryland. She has worked to promote health and education in developing countries in South Asia, Africa, Eurasia, and the Middle East. Dead Reckoning in Frederick is Allen’s fourth novel, following Deadly Untruths, The Yeti Quotient, and Lies Beneath Ellicott City.