Fauldon’s Dream and the Karier of the Task 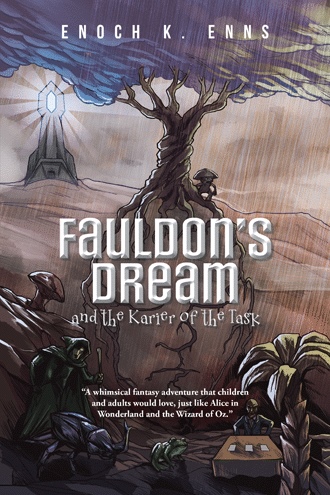 There he stood utterly dazed. Before him was a world he’d never seen (one of more splendor than he could even possibly dream of—and I say “dream” because that was the look on his face). Colors filled the skies with streaks of vivid hues, and streams of silky wateriness flowed freely and independently high above him. Plants and shrubs and trees alike were of quite overly-peculiar shapes and in-proportional sizes. It was all nearly too much for him to take in (and much of it he didn’t). Behind him, the once familiar booth now turned to earth and crumbled down upon itself. To make matters even more abnormal, a gigantic cloud tree sprang forth from the ground and began raining down upon the rubble—turning it to mud and flowing hence forth down the opposite side of that hill. He stood dumbfounded looking at a man who had suddenly appeared as he always did in a bright suit—as if to find some certainty he hadn’t gone mad. He found no certainty of any sorts. Instead, the man lifted his head upright in utmost satisfaction, saying, “Shall we carry on then?” “Carry on?” Mr Fauldon exclaimed, “I just saw a man walk through that door naught but moments before. Sir Hilton was his name. Have you seen him?” The stranger seemed astounded at the preposterous thought of yet another person. “Sir Hilton you say? Never heard of him. Now, if you please, Mr Fauldon, might we progress?” He (the strange man in suit and leather hat, of course) motioned with his body down the winding hill. “And who might you be that I’d follow ever so blindly?” Mr Fauldon asked, not moving an inch. “You may call me sir Knowington, dear sir. Now honestly, if you don’t mind, shall we continue with delay of pointless conversation or jolly well got on our way?” He had no choice but to follow (or rather he had just simply not thought of anything else more reasonable to do). And who might blame him? He’d long since lost sight of reason as he knew it, and so they proceeded through the all-too-queer land of some totally different reality. He was led down from the hill—the cloud tree still raining its mist and growing larger, and the pile of once familiar rubble now a puddle of mud that ran down and began gathering further on at the foot of the slope and began forming a pond of memories and reflection. “Well, hello there!” came a distant and filled voice (as if drunk yet retaining some sense of awareness and intellect). And there, in but a blink of unawareness, now resided a table covered in white cloth with a bearded man in blue tux—obviously over-worn and under-washed—and hat sitting behind it (the first impression of course being a gambler of sorts). But that would have been an understatement and quite unfairly a far-fetched conclusion. Upon reaching the table closer, Mr Fauldon could make out several cards spread neatly over it. On each card was a symbol—a simple one of no foreseeable purpose, or so I have come to know. “Oh, not now!” said sir Knowington in a discontented voice. “Mr Fauldon has no time for such games and business.” “But alas!” the man intruded, “Might I not, in the least, introduce myself?” “He might as well,” Mr Fauldon replied. “Not like nothing else is new….” “That’s the spirit! Welcome to Serve Per Card’s Place—where the deal is and always will be! And just for giving of your time, I shall deal you your first card on me!” The man spoke with such enthusiasm in his work as he drew a single card from his white-spaced deck that he’d flung from his sleeve. The card fell face-up with the symbol showing. “Hm,” he mumbled, scratching his beard, “the ‘Inquisitor’. It seems your life will be filled with questions I’m afraid.” “Oh, well what good that is to my situation?” Mr Fauldon sarcastically remarked. “Don’t ask me!” the man said, “Ask the card! Or can you not read?” “I can to read!” Mr Fauldon pronounced. “And I need not a card to tell me what to do.” “It hasn’t told you anything yet,” the dealer laughed, “You haven’t asked it anything!” “Foolish this is,” said Mr Fauldon, handing him his card, “Here, have your card back.” “Hmm, very well then. Again?” the dealer asked, a childish look of anxiety awaiting a positive response (for that’s all he seemed to do with his life—drawing cards). “Mr Fauldon seems to have had enough, let him be,” sir Knowington said. “Ah, well too-ta-loo! And here, I’ll give you another card free for just having met!” The man’s huge smile was accompanied by a firm open hand. But before Mr Fauldon could reach out for it, the man had jerked his hand away, quickly adding, “Never mind that one! Would have hated for you to have Misfortune. Here, have this one—it was mine, but I give it to you!” His face lit up as Mr Fauldon took it. “It’s blank?” he said. An even bolder smile stretched across the man’s face. “For now, yes,” he answered, “it is.” “Very well now!” burst in sir Knowington (who felt as though the whole conversation had been too long already). “Shall we?” “Where is it you’re going?” the dealer asked. “To Chestleton,” replied he, and the both of them were off—Serve Per Card’s Place vanishing behind the curve of the road. 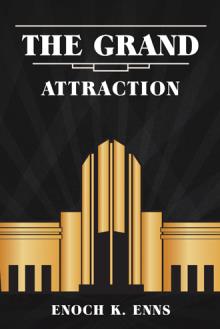 Mr Fauldon has long been wandering the streets of a bustling city in need of adventure and a new spark in his life--and what he stumbles upon will answer that call. Join Mr Fauldon in an adventure of a lifetime as he is swept into a new realm, where everything defies the limits of what his imagination once thought. Once jobless, he is now tasked as a carrier of a precious stone amidst a fragile realm. But will he be able to see through all the questions flaunting his mind? Will he be misguided by the ancient Shrooblin goblins or the ravaged thief? Does he have what it takes to make it through Hygh Pass and the Rhino Beetles as large and small as ants and leopards?

Enoch K. Enns was raised in the tropics of Papua New Guinea, where, as a child, the mind was his greatest friend. He would spend countless hours and days upon end wandering the vast expanses of trees, mountains, and rivers, creating for himself the most entertaining adventures anyone could imagine. It is now that he aspires to put the mind so rich to him upon paper for others to experience and enjoy as he did. Combining tales of old and new, Enoch crafts new realms of imagination to inspire, captivate, and journey alongside--for this venture has never been alone for him. It has always been him and his reader.