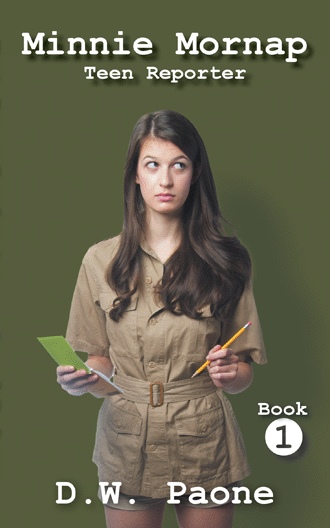 Mr. Hecht stands before the class. He's kind of old, even for a teacher. Gray hair, a receding hairline and just enough lines to give his face character. He wears a wrinkled sports jacket and a tie whose knot hangs a good two inches from his unbuttoned collar. Blue jeans and sneakers complete this ensemble, making him appear slightly more youthful than he really is.

He gives the class a good looking over before he speaks. The late bell echoes throughout the building. This is his cue to start.

"This is a journalism class. That makes you journalists. And I don't mean a journal like a diary or a 'blog' or whatever it's called these days - I mean an old-fashioned newspaper. Your job is to put out a newspaper every four weeks. Now the first thing is you have to start looking, sounding and acting like newspaper people.

"So first thing tomorrow everyone shows up with coffee. And I don't mean a latte or some other pansy coffee drink, I mean a cup of mud from a gas station or some 24-hour joint where they never clean the pots! And God help you if you don't drink it black. By Christmas I expect everyone to have a caffeine addiction. Oh, and from here on in everyone calls me Chief."

Was this guy for real? Or was this just some theatrics to get the class going? No one could tell.

"When I call your name, tell me what you may want to write about in the paper." He looks at the roster. "Ambrico, Christina."

Christina Ambrico surely doesn't want to go first, but with the name Ambrico, she goes first all the time.

"Poetry!? Save that for the literary magazine, sweetheart. We're here to write news." He looks at the roster again. "Bence, Laura."

"Was that a question or a statement? Sure, every newspaper has a sports section. That's more like it." He reads the next name. "Damm, Morton. Morton?" The class laughs.

Mr. Hecht gives him a look.

"Pictures are terrific! Every newspaper needs pictures. Do you know what a newspaper without pictures is? Reader's Digest, that's what!" He reads the next name. "Hearst, Justin. Hearst?"

"Here is your first homework assignment. Watch Citizen Kane." He writes "Citizen Kane" on the board.

"It's old, long and in black and white, but you'll have a peek into the life of one of the biggest names in publishing. Charles Foster Kane is a thinly disguised version of William Randolph Hearst, whose legacy in journalism continues today. As for you, you have some pretty big shoes to fill."

"I know, Chief. But I can fill them. I guarantee it. After all, journalism is in my blood."

"Confident, are we?" asks Mr. Hecht rhetorically. "What do you want to write about?"

"I'll just ignore that." He reads the next name. "Mornap, Minnie."

"I meant to say that, Chief! It just came out wrong," interjects Justin.

"You meant to say 'investigative reporting' and it came out 'the human condition'?"

"I see. After everyone watches Citizen Kane, your next assignment is to read All the President's Men. It's investigative reporting at its best. If the written word can bring down the president of the United States, then it can do anything."

Justin glances over at Minnie with a look of contempt. She doesn't know it yet, but she has made an enemy.

Minnie Mornap: Teen Reporter is a young adult mystery novel in the spirit of Nancy Drew. In this book, the first in the series, Minnie is a tenth grader at Succotash Central High School, where she takes a journalism class and discovers her natural talent for investigative reporting and then determines the real reason for an explosion at school. Her journalism teacher, Mr. Hecht (who likes to be called Chief), nurtures her gift for reportage and jumpstarts her career as a professional reporter. Along the way, she meets her first boyfriend, Morton Damm, the photographer who shoots the pictures that illustrate her articles. The second book of the series, The Pharaoh’s Curse, should be out in the spring of 2017.

D. W. Paone’s first book, Mickey Rooney Was Right, was published through AuthorHouse in 2010. It’s his autobiography with the emphasis on his twenty years in the motion-picture industry but never having any long-term success. In it, he gives an entire film school curriculum. It’s for anyone with any interest in a career in entertainment. His second book, Minnie Mornap: Teen Reporter, was published through AuthorHouse in 2016. It’s a young adult mystery novel in the spirit of Nancy Drew. It’s the first book in a series.