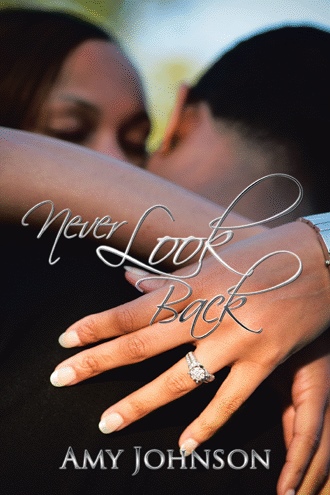 Fifteen minutes later, I heard the garage door open and close again. Once again, I thought nothing of it, and I continued writing. When I write, I lose all sense of time, space, and my surroundings. I only stopped when I needed to go to the bathroom, nearly two hours later. I sauntered through the house to go back up front, satisfied that I was feeling much more positive than I felt when I left. I went to the half bath because it was closest to the living room. When I finished and walked into the living room, the sight that hit me suddenly transformed my sweet apple smiles to sour lemon frowns. Anthony, wearing nothing but his boxers, was stretched out on the sofa. He had kicked off his shoes in front of the door, his coat was hanging on the hooks beside the door, and his shoes should have been underneath it! His shirt, undershirt and jeans were scattered on the floor as if he undressed as he walked in. In front of him, on the coffee table was a large bottle of vodka still in its brown paper bag, a bottle of cranberry juice, and a red plastic cup. Why? Why do liquor stores give out those ridiculous cups? Do customers ask for them, or are they just given out with each purchase? He had finished several cups of the juice and liquor, and his mood was rapidly approaching its vehement stage. “Oh! Amina Jefferson has entered the room!” he loudly announced and chuckled. “Anthony, why are you drinking that stuff?” I asked incredulously. “Because the beer wasn’t doing anything for me,” he loudly answered in a surprisingly serious tone. I looked at him and frowned. “Because I needed somebody to keep me company while I watched the game since my woman was so occupied. “Come here!” he swung his legs off the couch, stomped his feet on the floor, and patted the cushion beside him. “Come sit down and watch this game with me baby!” I rolled my eyes at him as I peered down at the floor littered with his clothes. I longed to pick them up, but I stood there, glued to my spot, paralyzed with disgust. Who is this man? Why is he in my life? “No, I’m going to go back in the sunroom to write,” I answered casually. He leaned forward and poured more liquor into the cup followed by a few drops of the cranberry juice. Umm . . . you got that shit backwards baby! Pour the juice then the liquor! “And talk on the phone?” he accused with a raise of his right eyebrow. “Oh, that was just D,” I informed nonchalantly with a casual dismissive wave of my hand. “So, you’re still talking to him?” he huffed after taking a swig of his drink, closing his eyes and shaking his head due to the intensity of the alcohol. “Yes Anthony. I’ll always talk to him. He’s my best friend from childhood. Remember, we already talked about this. We’ve been friends . . .” “For as long as you can remember. Yadda yadda yadda yah! Yes, I remember talking about the fakery, not the reality. Spare me the got damn theatrics my drama queen!” he sneered. Oh shit. His full blown buzz is taking full effect rather quickly. Then again, I did leave him to it for the past couple of hours. Time for me to disappear. “But what we really didn’t discuss is the fact that you fucked him!” Anthony loudly sputtered. He pronounced that f word with such force that spit sprayed out of his mouth and landed on the coffee table. I was shocked into silence. I raised my foot to move, but his drunken spiel stopped me in my tracks. “Not only did you fuck him, but you fucked him many many many many many many many times!” he drunkenly exaggerated. He was still patting the spot beside him as if I would actually come and sit down. Shocked, I stood there with wide eyes and wondered if he had been reading my journals. Where was all this coming from? Has something happened? He hasn’t had a problem with me talking to D before this! Why is it such a problem now? “I’m not stupid Amina Jefferson,” I can tell when a man has fucked my woman or wants to fuck my woman! Your friend D has fucked you, and your friend Rashad wants to fuck you!” he shouted as if he just announced an earth-shattering revelation. I just looked at him and wondered how he could possibly get that drunk so fast. And why do drunk people speak nothing but truth? I had to keep my mouth shut on this one. There was practically nothing that I could say in my defense. I started walking away, but he got up, stumbled over to me, and blocked my path. The alcohol smell was so strong that it almost gave me a buzz! “This shit is going to stop! And it’s going to stop right here, right now! You are going to have to choose. Either you want me or you want your male friends, but you can’t have both!” he roared. As he was yelling down into my face, I winced, not only from the overpowering smell, but also from the realization that he was right, and that it was going to be a difficult decision. 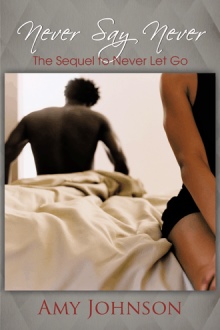 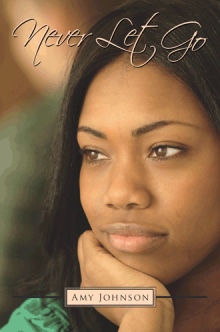 Amina’s life has changed for the better . . . and for the worse. Difficult work relationships are slowly turning around thanks to her deliberate efforts to improve them, and a surprising new connection at work causes Amina to rethink her relationship with Anthony. A monster from the past repeatedly rears its ugly head and prompts Amina to make an entirely selfish decision. Is this a decision that she can live with, or is it one that will destroy her new found happiness?

Amy R. Johnson currently resides in Plano, Texas with her husband and two sons. Always passionate about teaching, learning, and helping others, she teaches high school English at a public school and College Preparatory Courses at a private school. In her two previous novels, Never Let Go and Never Say Never, Amy tackled the tough issues of domestic violence and PTSD. Her characters and situations are so authentic and life-like that readers often question her about the parallels of her life and the characters in her novels. Never Let Go, an eye-opening story about dealing with domestic abuse, is a tribute to her hometown, El Dorado, Arkansas. Never Say Never is the second book in the series about the fictional character Amina Jefferson and this book touches on the struggles and harsh realities of PTSD. “So many people have asked if I based the character on myself and my life experiences. The answer remains yes, no and maybe. Amina is me, you, your mother, your sister, your daughter, your aunt, your cousin, your niece, your co-worker, your best friend, the woman you can’t stand, the women that you speak to everyday and the strangers that you pass by without a second thought. There’s a part of her in every woman. I sincerely hope that you enjoy her stories,” was Amy’s remarks at a book signing event for her first two books. Never Look Back continues Amina’s story. Alcoholism is the main topic, and Amina shares the “struggle” spotlight with Anthony, his daughter Arielle, and her coworker Serena. Expanding these characters’ stories has led to the promise of another book in the series, Never Give Up. Over the years, Mrs. Johnson’s reasons for writing have transformed in many ways, but they basically remained the same: “My purposes for writing are to shine a ‘soft and empathetic’ light on painful life experiences, provide hope, laughter, joy and promote a ‘love affair’ with literacy. “If my words can help someone laugh, love, or learn, then I feel like I have contributed something meaningful to the world and hopefully my legacy will live on for many generations.”