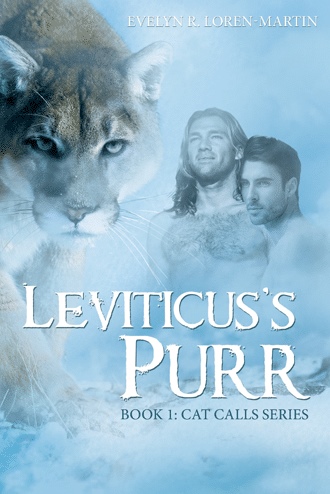 Roger cleared his throat and grinned sheepishly as he stepped back. He realized immediately that as far as stalling tactics went, his was a pretty lame one. Quickly recovering, Roger put as much assertiveness in his stance as he could muster. “Um, Levi, I would rather … I mean, I was wondering … could we have our revealing talk somewhere with fewer distractions. I mean … you could always give me the grand tour after dinner, right?” Roger asked, hoping like hell he hadn’t misjudged the situation.

Roger stood as nonchalantly as he could, praying that his inner shakiness wouldn’t break through his outer calm. Waiting for Levi’s answer was going to be his undoing—he just knew it. Roger could already feel his bravado slipping. Thoughts that he’d overstepped some unforeseen boundary started creeping in. Every second that ticked past felt like watching a slug crawl. Roger was not to be disappointed.

Levi took a moment to take in his mate’s demeanor, and then he immediately encircled Roger, ending the inner browbeating he sensed his baby was going through. With a powerful arm on either side of his smaller mate’s body, Levi felt Roger relax. Without a moment’s hesitation, Levi leaned in, intent on capturing those delicious lips again.

Roger was forced to lean back against the siding. He suppressed a giggle as he did so, again noticing their height difference for a second before Levi’s beckoning lips captured his attention. They were enticingly irresistible. And for the first time, Roger initiated their kiss.

Also, for the first time, Levi reluctantly ended it. The moans of both men mirrored disappointment with the uncompleted passion the kiss had promised. It was necessary for Levi to keep his libido in check. He couldn’t allow himself to go any further—afraid that he’d go too far before his mate was ready.

Judging from Roger’s surprise when he’d ended their kiss, it was time for Levi to set the hook. “Certainly, Rog. I have the perfect neutral place in mind for a private talk.” Opening the right half of the heavily reinforced double front door, Levi waited for Roger to enter. “Right this way, mate, just a little way off to our left. We can relax in the library with a tumbler of brandy while we have our little talk. It’s a very comfortable setting where you’ll be encouraged to take all the time you need. I want all your questions and fears put to rest,” Levi said.

“Sheesh Levi! This place is just like ‘Doctor Who’s’ phone booth. I think I’m gonna need a map.” Levi chuckled at the comparison. He’d always loved the concept of a Tardis in that imaginative decades old UK series.

Levi was so at ease while leading his mate into the library that Roger could feel his own unease melting away. Amazement struck him anew as he realized it had taken weeks for him to feel this comfortable with Gary.

“I don’t want you to fear asking any of the questions you may have, love.” Levi decided to pause for a bit in the hallway. “However, before we begin, there are two things I can promise you up front.” Levi cupped Roger’s face in one of his large powerful hands while circling his other arm around Roger’s well-defined, yet smaller shoulders. Levi gently pulled Roger into a loose comforting hug—meant solely to offer the reassurance that he felt certain Roger hungered for.

“Promises? But you don’t owe me any—”

Levi cut off Roger’s protest by sliding a thumb over his lips. “I hold honor above all else, and as old worldly as this may sound, I am incapable of cheating on he who holds my heart.” Levi bent down to reclaim the lips, while cupping the face of the only man who would ever do exactly that - with biddable encouraging hands.

Leviticus was able to caress his baby’s check a bit while applying gentle pressure to those sweet beckoning lips. Levi was fascinated and thrilled beyond measure when Roger slightly parted them, shyly touching Levi’s probing tongue with his own. Levi immediately rewarded Roger’s actions by deepening their kiss and leisurely bringing his hand up to rest behind Roger’s head. He cradled his mate in his arms as they jointly explored each other’s mouths. Roger was determined to give as much as he got, and he quickly wrapped his arms around Levi’s waist, weaving his hands within the material of Levi’s loosely tucked-in shirt.

Levi secretly smiled at the feel of his baby tugging his shirt completely out from the back of his jeans so he could wrap his smaller hands in the material. It was time to slowly reel his catch in.

Roger had thought he’d been kissed many times before this. He was twenty-seven after all, and he had slightly more than a decade of enjoying the pleasures of a man’s kiss. Reluctantly he had to admit—if only to himself—that he had had a lot less time enjoying the actual sex side of things. Like many of the young gay men he’d shared coffee-shop chatter with, he had suffered through a couple selfish and less-than-gentle lovers, but up until that very moment, he’d thought his kissing experience was stellar. Let the record state, Roger inwardly acknowledged, I was wrong.

With dual moans of protest, Levi ended their kiss. It was rapidly becoming a favorite of his—the kissing, not the ending part. Levi wanted another one, but he knew his mate’s doubts had to be addressed before he could press him for more—or successfully land his quarry.

“Come this way, love.” Levi led Roger down the hallway. Reaching out with his other hand, Levi opened the oak-paneled doors to the library, inviting Roger to enter ahead of him. With an easy motion, Levi slid the doors shut behind them.

Leviticus is alpha of the Coalition of Paranormal’s newly sanctioned were-cougar pride, the Mountain Clan. When Levi identifies the minty scent of catnip, it can only mean one thing: his destined mate is close. Roger is a human, completely in the dark on anything paranormal except for Hollywood’s interpolations, and on a road trip nursing a wounded heart when he takes a break from driving.

Imagine Roger’s surprise when an Adonis of unbelievable yumminess shows up at his car window. Roger is in awe of his admirer, but what’s with all the sniffing? Despite immediate attraction between Levi and Roger, the problem—or, to be more specific, problems—mount quickly when Levi’s bitter brother Gabriel gets involved, obsessed with punishing his powerful sibling.

Gabriel is hell-bent on righting a wrong he feels Levi’s pride of gay shifters has done to the mother of all nature. Gabriel is determined to correct this slight, and he won’t let collateral damage stop him. As a human, Roger is an easy target, but Levi won’t allow his mate to be hurt at any cost. Can Levi find a way to establish peace with his brother while nurturing his new relationship with the man he’s fated to love?

Evelyn R. Loren-Martin ended her thirty-five year career as a papermaker to pursue her interest in writing. As an avid reader for decades, the voices in her head persuaded her to try writing on paper for a change—instead of making it. With her kitty Drac sleeping on her feet, she’s now doing exactly that. She currently lives in Kelso, Washington.