The Boy in Nebraska and the Ice Man of the Alps

The Uncertain Journey into Manhood 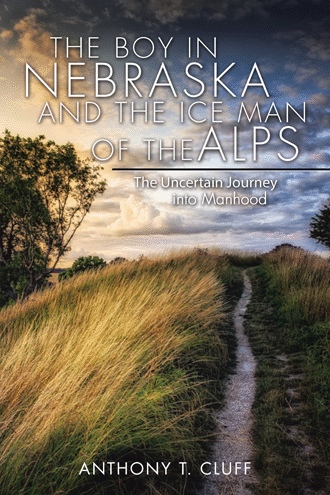 The boy to this day remains buried somewhere near Florence, Nebraska. He didn't make it to the mountain west. He would never see the snow-capped high mountains to the east of their peaceful valley, nor would he see the sun set each evening in a blaze of orange and red above the mountains to the west. He wouldn't see the water run clear and fast down the numerous canyons that fed the valley. Nor would he catch fish from them. Nor would he marvel at the huge herds of elk and deer that drank from their banks. Today, modern highways cross the same terrain where he is buried. High speed automobiles race to the spot in the North Platte River where wagons and push carts once moved westward in search of religious refuge in the intermountain region or in response to the lure of gold further to the west in California. There is no marker to show where the young boy was laid to rest. No one knows where that even might be today. For all anyone knows, the spot may be covered over with the asphalt of a McDonald's drive in. Excerpt from "The Boy in Nebraska" His name is Otzi. It was the name scientists gave him. They called him Otzi because he had been found in the Otztal Alps near the border of Italy and Austria. But the name by which he has come to be known best is "The Ice Man of the Alps." That's because he was found part way out of a glacier where he had been encased in the ice and snow for not just centuries, but millennia, waiting to be found. One fateful day on a high alpine pass Otzi met up with someone against who he, as able and experienced as he may have been, was no match. He had managed to survive for more than four decades in a harsh place and at a challenging time, but it all came to an end that day. It would take another 5,000 years for anyone to realize that he had ever been there. Excerpt from "The Ice Man of the Alps"

In keeping with the keen historical insights of his first book, In Search of the Great White God, where he probes origins of his childhood religion, Anthony T. Cluff once again reaches back in time to tell stories here of thirty-two boys and men and their journey to manhood. While each story is unique, Cluff says that the common theme in all is the uncertainty of the journey once it has begun. The outcome can never be foreseen. One young boy’s journey ends almost before it begins, another’s at the doorstep to manhood, while another man’s journey has gone on for centuries. In the telling of these stories, Cluff creates a new awareness of the long and unbroken chain that links all of us living today with the boys and men who overcame the challenges of life’s journey in the past. Then, as now, the journeys are about courage, heroism, tragedy, defeat, setbacks, and opportunity. There is something here for everyone in these stories, Cluff says, but these stories will have special meaning for young men who are now on their own unique journeys to becoming a man.

Anthony T. Cluff holds a PhD in economics from The George Washington University. He spent his entire career as a professional economist in Washington, D.C., working in both the private and public sectors. He retired in 1999 as head of the prestigious Financial Services Roundtable, an association of the senior executives from the nation’s major financial institutions. In recognition of his years of service and dedication to the study of issues in banking and finance, the Roundtable’s research foundation was formally renamed as the Anthony T. Cluff Financial Services Research Fund in his honor. Prior to heading the Roundtable, he served as Minority Staff Director on the Banking Committee of the U.S. Senate. Cluff is the author of In Search of the Great White God: From Big Bang to Coba and Beyond, published by Outskirts Press in 2010. The book has been called a “soul-searching, unexpectedly humorous, and slightly cantankerous look at one man’s search for meaning.” It was named in 2010 as one of four finalists in the general religion category of USA Book News National Best Books Awards. The Boy in Nebraska and the Ice Man of the Alps: The Uncertain Journey into Manhood is Cluff’s second book. It is a collection of thirty-two stories about events in the lives of boys and men he has known, grown up with or would one day like to meet. Cluff is also the author of numerous unpublished white papers, which he has shared with members of Congress, fellow economists, the media, and other interested parties. Among them are: “The Power of Economics: The Unseen Hand in the Dismal Science,” “Keynesianism: Marx in Drag,” and “Neo-Marxism in America: Barak Obama’s Legacy.” Anthony Cluff is the father of five children, the grandfather of twelve and the great grandfather of one. He lives in Aldie, Virginia with his wife, acclaimed artist Donna Clark, and their three dogs.