The Hidden Value in Your Life Insurance

Funds for your Retirement 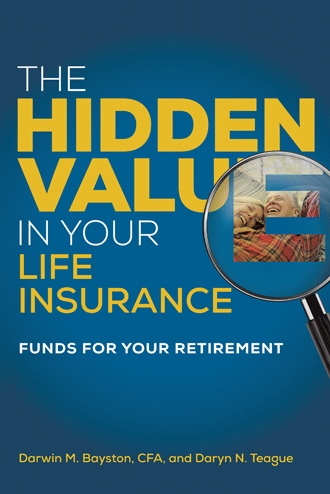 Jim is an 81 year-old widower in Florida living on a fixed income. He receives a modest check each month from Social Security and has about $120,000 remaining from his hard-earned life savings.

Unfortunately, as a result of the unpredictable ups and downs of the financial markets – combined with the low interest rates earned on CDs and treasury bonds – his retirement savings haven’t produced the kind of income he had hoped. Meanwhile, Jim’s health has begun to decline a bit and he now has some medical issues, resulting in rising bills for doctor visits and the prescription medications he needs every month.

Then one day, Jim collected his mail and came across an unwelcome surprise that rocked his world.

The letter from his life insurance company informed him that, due to unforeseen circumstances that have hurt the company’s profitability, they were going to be raising the premiums on Jim’s $250,000 universal life insurance policy from $7,500 per year to $10,500 per year. The original premium was already a burden, but he was willing to cut corners on other expenses in order to keep making the payments because that life insurance policy was Jim’s intended gift to his children and grandchildren. He viewed it as his final act of generosity for the people he loved more than anything in the world.

With this notice that the premiums would be increasing to an even higher annual amount, he knew the burden would force him into a situation where he would quite literally have to choose whether to purchase his medications next month or pay the premium on his life insurance policy. He called the life insurance company to explore his options.
Jim spoke to a nice person from the company who informed him that he could either keep the policy in-force by finding a way to make the higher premium payments on time or he could exercise the option of surrendering his policy. If he chose to surrender the policy, he would receive a cash payment from the company -- known as the policy’s “cash surrender value” -- for approximately $10,000.

Ten thousand dollars? Sure, that would be better than zero, but it wouldn’t pay Jim’s medical bills for long and it certainly wouldn’t give him the money he hoped to leave behind for his family when he passed away.

Jim decided to talk it over with his three kids, one of whom is a financial advisor in California. The siblings were unanimous in their feedback: they each had their own families now, they were taking responsibility for their own financial futures, and they didn’t want their father to be burdened by the escalating premiums on a life insurance policy. They encouraged him to preserve his money and assured him the life insurance policy – which might have been very important at an earlier time in their dad’s life – just wasn’t needed anymore.

However, the financial advisor in the family spoke up and told Jim that before he surrendered the policy back to the insurance company for the nominal cash surrender value they were offering, he might want to look into the possibility that his policy might be sold. He told him about something called a “life settlement” that can be a good option for seniors who no longer want or can afford their life insurance premiums.

Jim’s son went online and found a life settlement broker who is located near his dad in Florida, then checked out the broker’s professional credentials and experience to make sure that he seemed qualified to help. The broker talked to Jim the next week and explained the life settlement option to him. Jim agreed to pursue it and directed the broker to explore how much more cash he might receive by selling his policy, rather than accepting the cash surrender value the insurance company offered.

To Jim’s great delight, within just a few weeks, the broker obtained three competing bids for his insurance policy. The highest of those bids was for $75,000 . . . more than seven times the amount that Jim would have received if he would have simply surrendered the policy back to the insurance company. Within 90 days, Jim received the check and became the most recent senior to benefit from a life settlement. He paid off some bills and put away enough cash to pay for his medications for years to come. Most of all, he gained some peace of mind.

Jim’s circumstances are not unusual in America. A 2015 report from the National Institute on Retirement Security, “The Continuing Retirement Savings Crisis,” confirmed that many Americans are ill-prepared for retirement and are highly anxious about their ability to retire. Many of these folks saw their financial resources eroded substantially by the 2007-2009 financial crisis and have still not been able to recover from that hit.

With seniors facing such serious financial stresses in retirement, it’s no wonder that a recent survey from Wells Fargo found that 22 percent of middle-class Americans say they would rather “die early” than not have enough money to live comfortably in retirement.

Just stop for a moment and let that sink in. We now live in a culture where one in five of our fellow citizens are under such psychological distress due to their retirement savings shortfall that they fear financial ruin more than they fear death.

It's as if our seniors are saying: We haven’t saved enough, we don’t know what our future needs will be, we can’t rely on our investments to produce much income and we don’t have enough assets in our names to generate the missing cash.

But what if the secret that Jim learned could be shared with all of these seniors who are in need of financial relief? What if they knew that a possible untapped asset for providing them with some immediate cash to help defray those retirement expenses may well be right under their noses, lying in a drawer?

Thirty-three percent of Americans have no retirement savings or pension, according to the Federal Reserve. No wonder so many of us are nervous about our ability to retire.

Fortunately, there is an asset that many American seniors have at their fingertips that they can use to fund their retirements. Most of them don’t even realize it.

Darwin M. Bayston, a chartered financial analyst, and Daryn N. Teague, a public relations consultant who works with providers of legal and financial services, created this simple consumer guide to help people unlock the hidden value in their life insurance policies. Learn how to:

find out the things that insurance companies don’t want you to know;
improve your quality of life in retirement;
eliminate what could be an unnecessary expense; and
reduce stress by gaining peace of mind about retirement.

Some life insurance companies actually prohibit the agent who sold you a policy from telling you about the strategies revealed in this guide. Find out about all of the options at your disposal by learning about The Hidden Value in Your Life Insurance.

Daryn N. Teague is the founder of Teague Communications, a boutique public relations firm. His firm serves as outside public relations counsel to select clients in the life settlement industry and also works with providers of legal and financial services. He lives in Southern California.