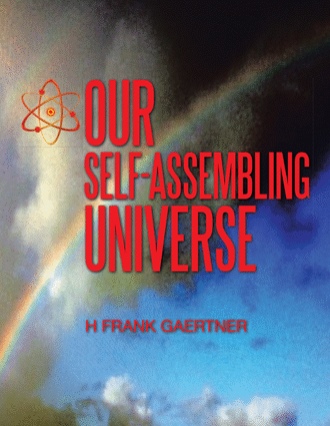 Our Self-Assembling Universe We all know about atoms. For example, we all know that hydrogen, oxygen, silver, and gold are atoms. We also know that atoms make soil, air, water, plants, animals and everything else on planet earth. But how many of us truly appreciate the fact that these things and all other such things in our universe are not only made of atoms but are made by them! Atoms, themselves self-assembled from nothing more than protons, neutrons, and electrons, have made and continue to make everything! And they’ve done it and continue to do it on their own. It is the purpose of this book to help the author, and others so interested, come to grips with this mind boggling state of affairs, and to help develop an intimate knowledge and appreciation for the self-assembly of our universe and of its building blocks, the atoms. To do this the author has, himself, begun self-assembling all of the atomic nuclei listed in the periodic chart of elements using colorful orange and white ping-pong balls, his chosen representatives for protons and neutrons. Through this device, the intimate stories uniquely connected to each of the atoms, their mode of self-assembly, and their role in the creation of the universe, unfold. Inside the book: “Most of us know, and do so with a high degree of confidence, that we, our planet, our solar system, our galaxy, and all other seemingly solid objects in our universe, both unimaginably large and invisibly small, are made of atoms. And yet, even though I have said it many times and thought it many more times, I hadn’t truly assimilated the very obvious fact that our universe isn’t just made of atoms, it has been, and continues to be, self-assembled by them. Atoms have been putting the universe together, and they, and the very forces that made them, have been doing it all, on their own, subatomic particle by subatomic particle, and atom by atom, from day one!”

H. Frank Gaertner is the author of over fifty scientific publications and patents covering areas of enzymology, bacteriology, entomology, virology, and molecular genetics. He received a PhD in biochemistry from Purdue University and was a professor at the University of Tennessee for thirteen years, where he taught graduate level courses in biochemistry, protein chemistry, enzymology, and molecular genetics. He is a cofounder of an acquired company, Mycogen Corp., and coinventor of MVP, the world's first genetically engineered insecticide, and of ARCs, an economical and powerful delivery system for cytokines. He is also the author of “The Amazing Illustrated Word Game Memory Books,” an illustrated five-book series designed to increase word knowledge and high-point bonus scores in word games. And he is the author of “Sally and the Magic River,” an inspiring, fanciful short story of a young girl's triumphant recovery from injury inflicted by a serious traffic accident. His present work, “Our Self-Assembling Universe,” is his first written attempt at making sense of the astounding cosmological discoveries that are now made almost on a daily basis. It is indeed an exciting time to be alive. As an avid fan of pulp science fiction at age thirteen, it is hard to believe that we are now living that imagined future! We are learning how it all started. We are learning how to travel to the stars. We are learning how to live forever. Brrr! That last one really gives me the shakes. It's just plain spooky! But wait, I must say, now that I'm 77, living in good health to 177 doesn't sound so hard to do, especially when one is as curious as I am and has a wonderful family of four daughters, three sons-in-law, six grandchildren, and a beautiful wife that I wouldn't mind having stick around in good health with me! Check back when I'm 177. I might not be so eager by then. By the way, lest I forget. I made number four on the charts for instrumental music on Reverb Nation! Check out my song Jaunty. It's really not too bad.