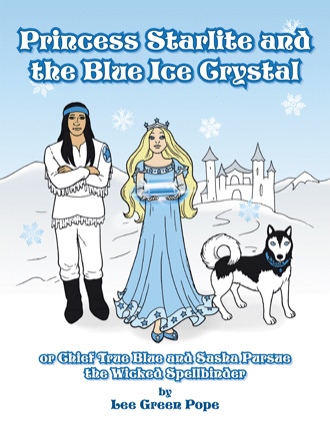 Once upon a time there was a beautiful, young princess named Starlite who ruled over the Blue Ice Kingdom. The princess had golden hair, and her eyes were the color of the blue sky. She loved to sing, dance, and to write poetry, but she had a serious side that she acquired when she was trained as a young girl to someday take over the duties of the Kingdom.

It was early one winter morning when she received a message from her prime minister that there was a mysterious visitor who was waiting to see her in the throne room. The lords and ladies of the court bowed low as she entered wearing her blue crystal crown and a pale blue, shimmery, satin gown trimmed with blue crystals. Prime Minister Periwinkle led her to her throne.

“Prime Minister, please have the sentry bring in this mysterious visitor.”

The sentry brought the visitor in and announced, “Your Majesty, the official Blue Ice Crystal Polisher.

Princess Starlite was puzzled and wondered out loud, “The Blue Ice Crystal Polisher? I never heard of such a title.”

An old man dressed in a scarlet robe stood before the princess. He was stooped over, and although his face was wrinkled, his eyes were a piercing green. He was the wicked Spellbinder in disguise.

The princess looked him over closely and declared, “My father never told me anything about a Blue Ice Crystal Polisher, and I never heard of you.”

The Spellbinder bowed low, and in a whispery voice said, “I’m sure your father, the King forgot to tell you. You see, I had polished the Crystal just before your father turned the Blue Ice Kingdom over to you two years ago. The Blue Ice Crystal must be polished with my special ointments every three years, or it will lose its power to protect your Kingdom.”

The princess hesitated to give her permission. “All this seems very odd, and I can’t let you have the Crystal without my father’s written permission.”

The Spellbinder smiled a crooked smile and said, “Of course Your Majesty. Here is the official Blue Ice Crystal Polisher Permit.” He opened his bag and took out a scroll tied with a blue satin ribbon. He unrolled the scroll and showed it to the princess. “You see,” he said, “here it is.” And he pointed to the Kings official seal.

Princess Starlite took the scroll and studied it carefully. “Everything seems to be in order. I guess Father just forgot to tell me. I certainly don’t want the Crystal to lose its power to guard and protect the kingdom.” She reached for the jeweled box on the table next to the throne, and when she opened it a bright, blue glow from the Blue Ice Crystal shone from the box.

As she handed him the box, she asked, “How long will this polishing take?”

“Oh, just a few moments,” he replied as he took a polishing cloth from his bag and poured a bit of ointment on it. “I am ready now. But first we must turn out the lights. The Blue Ice Crystal must be polished in the dark. With your Majesty’s permission, will the sentry turn out the lights? Then we will count to five, and when we turn the lights back on, the Crystal will be polished and ready for another three years.”

The Princess motioned to the sentry. “The lights Sentry.”

“Yes, Your Majesty,” he said as he turned out the lights.

Everyone in the throne room begin to count. “One, two, three, four, five!”

“Lights up, Sentry,” the princess requested.

The sentry turned on the lights, but the Spellbinder was nowhere to be seen.

Everyone cried out, “He’s gone!”

Prime Minister Periwinkle was silent while he tried to think of what could be done. Suddenly he stopped and replied, “Your Majesty, I am sure the thief is the wicked sorcerer who is known as the Spellbinder. I suggest we send for Chief True Blue. He is the finest tracker and scout in the land.”

The princess paused in thought, “Yes, I think I have heard of him. His accomplishments are well known, but I have never met him.”

Sometime later when Princess Starlite received word that Chief True Blue was approaching the palace, she summoned the prime minister and the lords and ladies of the court to join her in the throne room. Soon after the sentry entered and announced, “Your Majesty, the best tracker and scout in all the land, Chief True Blue and his assistant.”

Chief True Blue stood tall and strong. He had long black, straight hair and black eyes. He wore a blue headband and a white uniform trimmed with the Blue Ice Kingdom emblem on the arm of his jacket.

The princess could not help but be impressed with the handsome Chief as she welcomed him to the court.

Chief True Blue was equally impressed with the beautiful princess as he bowed and said, “When I received word that you needed me, I came as quickly as I could. I have brought my assistant with me who aides me with my tracking and scouting.”

The princess was puzzled and asked, “Where is your assistant?”

Chief True Blue whistled and through the door entered a black and white Siberian Husky. Her fluffy, white tail was curled up over her back as she trotted in and stood still at the Chief’s side. The Chief replied, “Your Majesty, this is my very valuable assistant. Her name is Sasha.”

Chief True Blue looked at Sasha and said, “Bow to Her Majesty.”

Sasha lowered her head and barked one time. 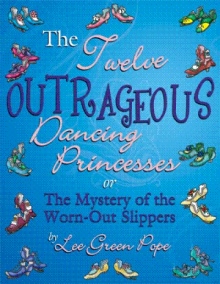 The Twelve Outrageous Dancing Princessess... or The Mystery of the Worn-Out Slippers
Lee Green Pope
$3.99 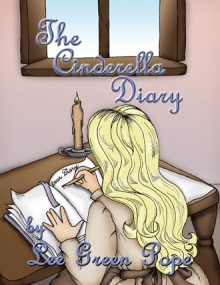 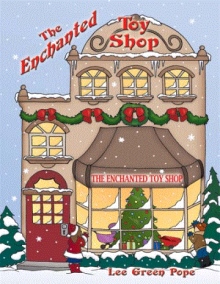 Princess Starlite and the Blue Ice Crystal started out as a play that I wrote and was produced at Biloxi Little Theatre in Biloxi, Mississippi. When I converted it to a book, changes were made to the title and some of the characters, but the basic story is the same.

Princess Starlite rules the Blue Ice Kingdom, and the Blue Ice Crystal has the power to protect the kingdom from all harm. The Wicked Spellbinder steals the Crystal and threatens to cast spells on this kingdom and all the adjoining kingdoms. Chief True Blue, the finest tracker in the land, and his Siberian husky, Sasha, are called in to capture the spellbinder and retrieve the Blue Ice Crystal.

The Wicked Spellbinder creates dangerous and perilous spellbinding situations in the path of the intrepid chief and his courageous husky assistant.

Lee Green Pope is an author, playwright, acting coach, storyteller, award-winning theatrical director, and published freelance writer. In addition to her many theatrical awards, she received the National Jefferson Award from the American Institute for Public Service. This award was cofounded by Jacqueline Kennedy Onassis and Sen. Robert Taft.

Mrs. Pope has written and directed twenty youth plays, and all of them have been produced at various theatres. In addition, she has adapted and directed four Shakespeare plays that were presented with original music and dance. She has presented playwriting workshops at Mississippi Theatre Association conventions, Southeastern Theatre conventions, and Gulfport Little Theatre.

She has conducted summer theatre camps for young people, ages four to eighteen, which included basics of theatre and young playwrights’ workshops, and she has been a storyteller at libraries and elementary schools.

This is the fourth in her “not so Grimm faerie tale” series, which include The Twelve Outrageous Dancing Princesses, The Enchanted Toyshop, and The Cinderella Diary. By the way, Lee Green Pope has a beautiful black and white Siberian husky named Sasha.