Wealth Is Not About the Money

by Michael A. Campbell 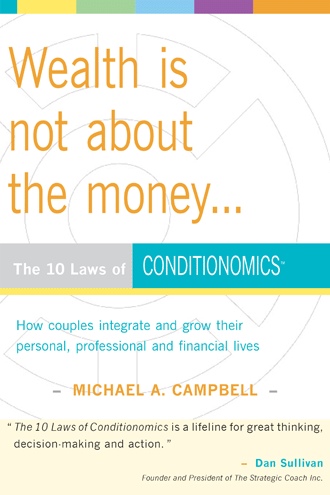 As I note elsewhere in the book, as a coach I am always surprised to learn how little many couples share with each other about what’s really important in life – even couples who have been married for twenty years and more. Now I don’t claim to be a marriage counselor. Interestingly though, a number of Conditionomics clients have told me that they walked away with some added value that was totally unexpected. They walked away with an enlightened perspective on what really matters to their spouse and a new confidence that, as a couple, they could masterfully integrate their personal, professional and financial lives. I would like to share a recent experience that, I believe, demonstrates the importance of Conditionomics. I was watching a movie on television late one evening. I don’t recall the name of the movie, but it was about a couple who appeared to be in their early forties. They had been together for a number of years and their marriage was at a point where it had lost its spark. In this particular scene, they were at dinner with another couple who had recently gotten married. The newlyweds were laughing and touching, being playful with one another. When the couple returned home, the wife said to the husband, “why don’t we have fun like that anymore?” The husband thought for a moment, turned to her and said, “Dear the difference is they have new love and we have old love.” Think about that. He said that it is normal for a couple to lose the passion that brought them together in the first place. I see this happening around me all the time. I have seen friends and associates who had everything suddenly become separated and divorced. While the divorce rate in the United States has exceeded 50% for years, the actual number of divorced people has doubled over the past twenty years and nearly one fourth as many more are legally separated. This is one of the most disturbing trends in today’s society. Is it reasonable to believe that over half of us are marrying the wrong person? I don’t think so. I believe that most couples, once married, quit having the kind of conversations they had when they were dating. You know the conversations, the ones about their dreams and vision of the future. Instead, they suddenly get serious and responsible. They separate their personal, professional and financial lives and slowly (and unknowingly) grow apart, until one day they discover the passion that brought them together is gone. Too often the result is divorce. Helping couples grow together by integrating their personal, professional and financial lives is the ultimate purpose of Conditionomics. For many of you Conditionomics will open the door to an old dimension in your relationship. It is my hope that by reopening this dimension you will grow together for the rest of your lives, as you originally intended. I encourage you to make The 10 Laws of Conditionomics an ongoing part of your lives. It is a simple way to never forget what is most important to you, both individually and collectively, and why you decided that your lives would be far richer together than apart. 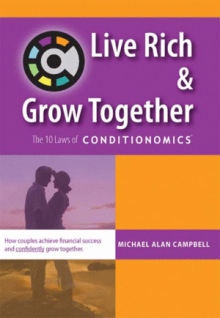 Live Rich and Grow Together
Michael A. Campbell
$21.49 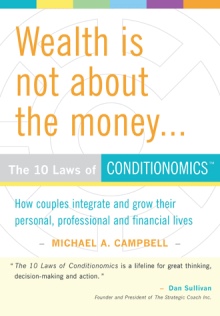 Wealth Is Not About The Money
Michael A. Campbell
$27.49

This book is entitled Wealth Is Not about the Money. The rest of Michael Campbell’s premise is that “it is about the purpose for which it is created.” And Michael has many more pithy morsels that will inspire and motivate you to rethink many of the things you thought were gospel about financial planning and building wealth. This book is short and to the point. It is for people, especially married couples, who are committed to living a rich life and growing together. But as Michael points out, many successful people, despite their high incomes, are ineffective at creating and accumulating wealth. The 10 Laws of Conditionomics is a summary of lessons learned about money and life based on Michael Campbell’s own personal experience and those of the many couples he has coached over the years. Read this book with your spouse. It will immediately help the two of you see a new way to plan your future together, starting with the here and now. You will learn life-changing strategies that will help you integrate and grow your personal, professional, and financial lives. These are guiding principles that will enable you to confidently achieve financial success and grow together for a lifetime.

Michael A. Campbell is the creator of Conditionomics® and an award-winning financial professional and entrepreneur. He has been written up in magazines and newspapers and has been a platform speaker at entrepreneurial and financial industry events. He has hosted his own radio show, offering listeners insight and advice on how to apply Conditionomics to successfully integrate and grow their personal, professional, and financial lives. He is an excellent communicator and creative strategist and a visionary with the uncanny ability to instill confidence by simplifying complex matters in a way that moves people to take positive action. One of Michael’s favorite activities is helping married couples have “the most important conversation in their lives that they’ve never had”—the Conditionomics Goals Driver experience.