The Boulders in My Life That Shaped My Journey 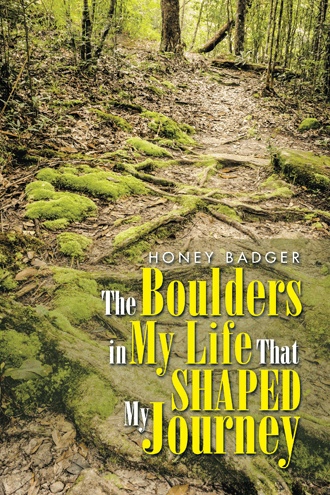 To My Reader, I wrote this book to tell the story of my life and how I have experienced being raped six times. Also, to tell the truth about what I have experienced, tell my account of what I have dealt with and how I have healed. It tells the truth about what happens once you report being raped in college and in the military. It tells the truth about what happens when you report rape on a campus. This book explains what I have been dealing with and what it is like to live with PTSD in the military and in society. Also, this book helps to expose what needs to be done to help veterans that are living with Post Traumatic Stress and Military Sexual Trauma. Also, this book talks about the different therapies that I have been in and explains what has seems to help me the most. In my family, it was a tradition to serve in a branch of the military. In every single war, there has been a member of my family. When I was growing up, I would watch my Uncle come home from the Military and saw how excited he was serving this country. It was not long and that became my dream too. I was living in the Midwest when 9-11 happened and then I decided that I was going to chase my dream and serve my country. I was chasing a dream to serve my country and wanted to have a career in the Armed Forces. I did not enlist to be raped and betrayed by my leaders. That night everything changed for me after I was raped. I thought that I would be safe with a man who was a third class petty officer, but I was totally wrong. Also, I believed that the Armed Forces would take care of me, but I was wrong about that too. I brought into all of those core values they teach Honor, Courage, Commitment, Valor , Loyalty, Respect, Duty, Selfless Service, Integrity, Shipmate. After I was raped by a fellow service member, all I experienced was hurt, betrayal, being called a liar, told that I did not matter, that the Uniformed Code of Military Justice did not apply to me, that I was a walking mattress and that the Armed Forces was willing to ruin the victims career; while protecting the man that raped you at all cost. I will not be silent any longer. I have thought about the numbers from the Department of Defense says that in 2012 there was 26,000 sexual assaults and rape in the military in the year 2012 and the numbers that one in four women will be raped in their lifetime. These numbers do not even take into consideration the women and men that never come forward and report the sexual assault or rape that happened to them. Then just this past week new number for the year 2014 came out, which have increased. With 26,000 incidents of sexual assault or rape it is time that the truth comes out and that the Department of Defense does something about this. The number has increased again in 2014. Court Martials have been down by 33 percent this past year. According to the Rand Survey, 63 percent of survivors have been retaliated against. It is time that the Military Justice Improvement Act is passed. As I sit here at my desk typing this as it is getting close to my horrifying ninth anniversary, I am trying to understand the alone feeling that I have had since I was raped six times. The silence that comes with being raped and all of the victim blaming that goes on. The rape does not end when you report it and find that you survived the rape itself. The rape continues to happen from having to do the rape kit, reporting to the police, being called a liar, told to just forget about it and all of the secondary trauma’s that take place, and all of the re-victimization that happens. That is only the beginning of the healing process. I want other women that have been raped to know that you are not alone. When you are raped in the military, there is a whole other layer of betrayal that takes place for many. In the summer of 2012, when I saw that the Senate Armed Forces Committee voted to keep the chain of command involved in rape cases , that did something to me. I could no longer be silent. I started to write about the rape that had happened to me and the other five rapes before that. Something has been happening to me as I write this, I have found my voice. I am no longer ashamed. It was never my shame in the first place because I am the one that had a crime happen to me. For the longest time, I have struggled with the definition of rape. But rape is any forced sexual intercourse or other sexual act without consent. I realized that there is no way that I could have consented to have sex when I was a little girl, that there legally is no way to consent to sex when drunk, or when you are passed out from drinking so much there is no way to consent to having sex.. I had a friend tell me that, “As you tell your story, it takes the power away from this experience and it is the shame of being judged that has the power over us.” I agree with this statement. That is why I am no longer being silent. This is my complete story and I hope that this reaches someone else and helps someone else to know that they are not alone in this. Healing is possible and it is a hard road. If I can heal so can you. I will be a voice that makes change happen. This is what happened to me.

This book is my personal story of being raped, dealing with Post Traumatic Stress Disorder and my journey in healing. It includes my personal journal through the years and how I have been recovering. I wrote this book because I wanted to tell my story and to help others to now that he or she is not alone. "Well written! Powerful!! "This problem has finally hit the headlines. It is brave women like Honey Badger who help us understand the lifetime of pain that is left when these crimes are committed. We need to hear these hard stories. The conversation must continue. From sex abuse in the churches, to the college campus, to the military sexual abuse and rape must be understood. Not just from a legal angle but what happens to these women and men who work a lifetime to learn to love themselves again, to trust again, to stand in the light and feel no shame." "No words can express or give proper condolences of a failed system. Six times...I look at you as a strong woman and survivor. God bless and keep the faith. "

Honey is a Navy Veteran and has advocated for other veterans who are survivors of military sexual trauma and Post traumatic Stress Disorder. In this role, she has been involved with trying to get the Military Justice improvement Act, Stop Act and Ruth Moore Act passed. She has been involved with tweeting, calling and emailing Senators and Representatives. Also, she has helped to communicate on social media about Vet's Rising and danced Break the Chain with other survivors. Honey has written her first nonfiction autobiography book called, The Boulders of my Life That Shaped My Journey. She has has overseen the marketing efforts and managing the marketing budget. Her most exciting work to date was creating a social media presence and direct mailing advertising campaign that was key to the successful launch of her poems and book. Not only did we have fun creating that campaign, but also we found it rewarding to see the results. She is truly passionate about advocating for issues such as Post Traumatic Stress Disorder, (PTSD), Military Sexual trauma (MST) and always eager to connect with other authors, advocates and activists. While I enjoy all aspects of my job, I think my favorite stage of a project is coming up with an idea and implementing it. She has an A.A.S. from Wake Technical Community College and Certified Nursing Assistant certificate from Wake Technical Community College. She is always interested in hearing from former colleagues, managers, or just interesting creative folk, so feel free to contact her if you’d like to connect.