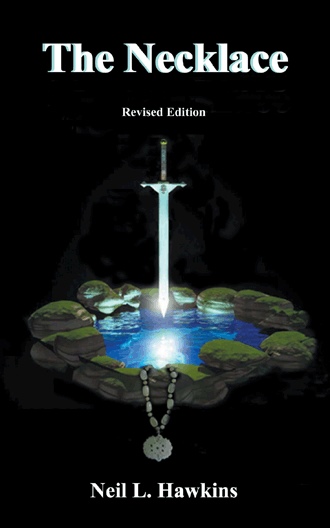 The hairless, milky-white Surions paid close attention to their computer readouts and instrument displays as their ship moved swiftly toward its objective—a large star in an uncharted sector of their galaxy. And as the ghost-like figures moved silently about the bridge, their brilliant blue eyes reflected off the many displays like so many sparkling jewels. All were over seven feet tall, lean and muscular. And their arms, reaching to their knees, were feared weapons in hand-to-hand combat by the Vorsh, Surion’s only known neighbor—and enemy. Some days earlier, during a scouting mission along the far edge of an unexplored sector, they narrowly escaped being blown to pieces when they were surprised and attacked by three Vorsh warbirds. The Surion ship’s weapons were equal to that of the Vorsh, and its captain’s tactics often superior, but his ship was no match in a conflict with three enemy starships. He knew immediately he was in over his head and would have to retreat. But before he fled, he wanted to once again show the Vorsh he was no coward. Initiating a gut-wrenching evasive maneuver, he ordered his tactical officer to fire at the Vorsh lead ship. Speed was too swift for the Surion’s phasers to rake the full length of the enemy, but the fire was enough to force the lead ship to abandon the battle. But concentrated fire from the other two Vorsh ships brought the Surion’s shields down to the verge of collapse. Their captains knew if they could get to the Surion ship before it turned again, they would have another glorious victory to their credit. But the Surion captain was no fool. He ordered a quick course reversal and headed out of the sector and into an unexplored area of their galaxy’s longest spiral arm. Only a few hours into the new region, the ship’s long-range sensors picked up a series of barely audible transmissions. Although unable to interpret their meaning, the Surions were more than curious about the transmissions, as they believed they and the Vorsh were alone in the universe. Knowing the Vorsh seldom gave chase or hung around long after a fight, the ship’s captain believed the sector they were in when attacked would be clear in a few days, sufficient time for him and his crew to investigate the new sector and perhaps locate the source of the transmissions. The following morning, fed up with sitting idle, the captain stood from his command chair and informed his first officer that he was going to his quarters. But as he turned to leave the bridge, another of the unintelligible transmissions came over the bridge speakers. The communications officer analyzed the incoming data and pinpointed the source—the second of five planets in a star system never before plotted. At the same moment, the science officer waved his hand for silence, saying he had picked up an unidentified object heading toward the same star, but that it was too far distant to accurately identify. Knowing it couldn’t possibly be a Vorsh ship, the captain ignored it, and retired to his quarters. He was an experienced officer, having served seven distinctive years as first officer on board an older destroyer and three years as captain of his current ship, one of Surion’s frontline battle cruisers. He wasn’t afraid to face the Vorsh, as the warrior’s call and lust for battle were the Surions’ strongest characteristics. It ran deep in their blood, bred into them through decades of warfare throughout their star system. But he was an exception. Although he and a handful of others had those same fighting instincts, they shared a vision—a vision of a day when war would no longer rule them. They were tired of the constant need to lift a bloody sword, and were looking forward to when they could wipe it clean and put it in its sheath for the last time. But there was no one among his crew that shared those same sentiments. All on board his ship held a passionate hatred for the Vorsh, or anything strange and unpredictable. Some days later, when his helm officer informed him they were approaching the second planet, he pushed aside the thoughts of peace and placed his attention on what he had decided to do. He knew his first officer expected to lead the landing party, but wanting to escape the monotonous drudgery of his bridge duties, he informed his crew that he would lead the team to the surface of the planet himself. The first officer was not pleased, as he had been looking forward to being the first to set foot on the alien planet. Grumbling to himself, he assumed the command position, his eyes betraying the jealousy he harbored against his captain. When it was time to leave, the captain met briefly with his landing party in the shuttle bay to explain what he expected of them once they were on the planet’s surface. And as the shuttle arced away from the ship and began its slow swinging descent, he relaxed in his seat alongside the pilot, a vision of his home in Surion’s Torok Forest penetrating the blackness behind his closed eyes. And as the image of his home faded, a smile crossed his thin lips. Through a veiled mist, he “saw” a familiar female figure, a warrior like himself, emerge from a secluded lake. The mist then melted into a dark shawl of green water and cascaded in slow motion over her head and shoulders, flowing down in sparkling droplets over her bare breasts. Breathing deeply, he smiled again as she embraced him on the sandy blue beach. But had he seen the color of the sand on the planet below, and the darker color into which it would turn, he wouldn’t have dreamed, knowing he would soon become involved in yet another short but bitter struggle to survive.

This sequel to The Book in the Loft takes the crew of the Council of Planets’ starship Explorer on a spiraling journey to a world inhabited by the very beings that are behind the leather-bound books. In his attempt to help them recapture their pirated ship, Neil MacBruce is thrown out of his time and space by a superior force and becomes involved in a whirlwind trip that involves those from the Jarlonian Circle of Planets and seemingly familiar earthly faces from his imagination. Imagination or real, he alone cannot find the way back to his own time and space. And in the events that follow, he becomes entangled with enemies in both dimensions—and with an ancient race that perhaps explains his own origins.

A native of Poughkeepsie, New York, he attended Augustana College, Rock Island, Illinois and the University of Stockholm in Sweden, later receiving a BA degree from the University of Minnesota, and an MS degree from Peabody Teachers College, Nashville, Tennessee. Since the age of five, when he “saw” Earth and the other planets from space in all their detail— twelve years before Sputnik—he has been intrigued and fascinated with flights of reality and fantasy. It was said he had a childhood out-of-body flight of the soul, as what he described then was identical to what has now only been seen by the Hubble Telescope. Later, his flights of reality were realized during a distinguished career as an Air Force officer, and his flights of fantasy became reality when he spent several years in “another world” (Russia), where he taught English at two technical institutions. After his marriage to a wonderful Russian woman, he combined their “two worlds” with his imagination in stories that took both through time and space to other worlds. He and his wife now reside on this world in their home on the shore of the mighty River Volga.