Is It Treason? Or Not? 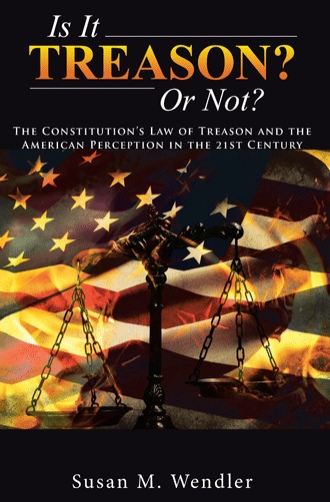 With hostilities between political parties deepening and wars becoming more complex, it can be a challenge understanding what constitutes treason under the United States Constitution.

Even if an action shocks you down to your red-white-and-blue bones, it doesn’t mean it’s really treason. It could be a lesser felony or not a crime at all.

This book clarifies and simplifies what it means to commit a treasonable offense by examining what the Constitution states, what judges have decided, and how current events are shaping attitudes about treason.

Excerpts from the Declaration of Independence, the U.S. Constitution, the Federalist Papers, the U.S. Code, Supreme Court Chief Justice John Marshall’s famous Aaron Burr court opinion, and an examination of the case against abolitionist John Brown provide a deep understanding of the issue.

Whether it’s people leaving the United States to fight with terrorists, multinational corporations siding with foreign governments on important issues, or politicians yielding some of the nation’s sovereign authority to international governing bodies, it’s becoming increasingly important to know Is it Treason? Or Not?

Susan M. Wendler earned a bachelor’s degree from Trinity University in Texas. She’s a direct descendent of the Texas Burleson pioneer family, granddaughter of renowned physicist Enoch Franklin George, and daughter of an adventurous paleontologist. She’s had longtime working relationships with licensed firearms manufacturers and is passionate about researching unusual projects with a balanced approach.