Love Letters from the Marine Wolf

A US Hospital and Transport Ship, an Army Medic Afloat, and a War Bride in World War II 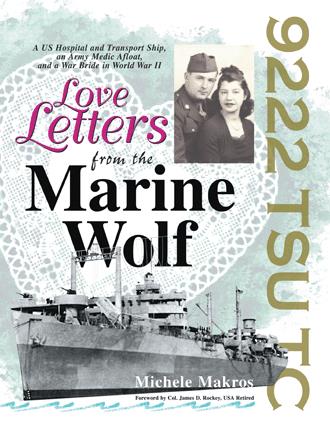 Love Letters from the Marine Wolf is a biography of the World War II hospital and troop transport ship USAT Marine Wolf. The story is told from the perspective of Sergeant Michael Makros Jr., ship’s complement surgical technician, and other shipmates under Army Transportation Command 9222 TSU TC. Their letters, photographs, documents, memorabilia, and testimonials take history below deck to find the human experience of a wartime ship at sea.

Michele Makros was born and raised in Akron, Ohio. She is a Kent State University graduate and holds a Bachelor of Fine Arts degree in graphic design. Her professional positions include art director for Hesselbart & Mitten, Inc., Failawn, Ohio, and President and CEO of ICONart, Inc., Copley, Ohio. Her awards include several ADDY citations of excellence, an Ace Award, a Ben Franklin Honorable Mention, and a Cleveland Communicators’ Certificate of Merit for Outstanding Achievement of Women in Communications. Michele chose early retirement to take care of her aging mother. Eventually, inheritance of World War II love letters inspired her to research and write about the SS Marine Wolf. She was also inspired to fly as a guardian for Honor Flight because nothing, in her opinion, is more rewarding than providing veterans an opportunity to see their memorial before time runs out as it did for her dad. Col. James D. Rockey (USA-Ret.), was born in Hemingford, Nebraska, and raised in Alliance. He is a graduate of Saint Agnes Academy, holds a BS degree from New Mexico Military Institute, and an MS from The George Washington University. Military schooling includes the Transportation Officers Career Course, The Command and General Staff College, and The Army War College. His leadership positions include platoon leader, company commander, battalion commander, and chief of staff of Fort Eustis, Virginia, and Military Traffic Management Command. His army service includes assignments in Korea, Vietnam, and Germany, and a stateside appointment at the Pentagon. His awards include the Legion of Merit, the Bronze Star Medal, the Defense Meritorious Medal, the Army Meritorious Service Medal, Air Medal (6 awards), the Army Commendation Medal (2 awards), the Master Army Aviator Badge, and the General Staff Identification Badge. Colonel Rockey has been President of the Army Transportation Museum Foundation since 1994. He was inducted into the Army Transportation Corps Hall of Fame on July 26, 2007.