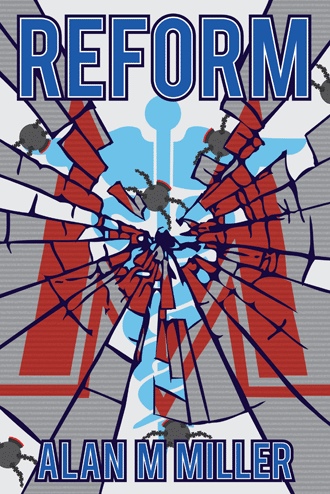 Leaving work that day Michael was still shaken from his encounter with the security man. Despite his distractions he couldn’t help notice that the demonstration had increased in intensity. Recent news reports said that the Hippocratins and the religious groups had been joined by a more radical and violent faction, the Weatherpersons or Weps.

Working his way through the noisy crowd, he stared straight ahead avoiding eye contact. Almost colliding with a woman, he mumbled an apology and moved to go around her. She stepped back into his path.

"Do you know that you are contributing to a system that denies the existence of hope?” Her dark eyes flashed, as he looked for a way to escape. He took a few steps back, she moved forward matching his retreat with her attack. “You work for a system that gives up on a person when they need the most help. A system that takes the human factor out of medicine and replaces it with all-powerful machines".

He felt trapped and wanted to run, instead found himself parroting Med-Met advertising. “We provide a service that people want. We have the best healthcare system in history. Everyone has access and gets equal treatment.”

“How naïve are you?” she said, again closing the distance between them. “Everyone is equal until they have a serious condition. At that point equality is defined by the algorithm. If the formula determines that it is economically more advantageous for them to live, they get optimal treatment. On the other hand if costs outweigh the economic benefits, it’s sayonara.”

As he had backed away they had separated from the crowd and now stood off by themselves. Michael didn’t speak. He stared at the woman in front of him. He stared into her eyes which were as dark as any he had ever seen but sparkled as she spoke. Her breath smelled of spearmint and drifted up to his nostrils, her body radiated heat. She grabbed him with her passion and he was drawn to her.

He suddenly realized that he was defending Med-Met. "Wait a minute,” he practically shouted trying to gain some control. “Who are you? What you are doing here? Why did you pick on me?" "Reasonable questions. I'm Sara Anson, I'm here because there are people who feel that the Med-Met system is the greatest abomination of the twenty-first century. It represents the culmination of what began as the industrial revolution and has resulted in the dehumanization of mankind. It has reduced each of us to a series of scans and a battery of tests the results of which decide if we live or die. It is a system that has far out grown its limitations and has become part of our social framework. It serves the political ambitions of its managers and lines the pockets of its corporate masters, and you are part of it.”

She pressed on maintaining her intensity, narrowing her eyes and lifting her chin.”We have people inside Med-Met who look for those who seem dissatisfied with the system, who perhaps question its morality. You were identified as one such person, and we want to help you with your dilemma." "Who's we?" He looked around to see if anyone was paying attention to them.

She smiled, "If you want to know more, join me for dinner. I think you will. My sources haven't been wrong yet." She leaned across him, her blouse brushing against his chest, and tapped her wrist band to his. An address scrolled across the screen. "If you want answers be there at 7:30 sharp."

Times are eerily different in the late twenty-first century. There is no question that technological advances and wide health care reform have drastically altered the delivery of medical care in America. Technicians and computers have replaced doctors and nurses. Medical corporate giant, Med-Met, controls the majority of health care. Only a small vestige of the old system remains with the Hippocratins, a group of physicians taught through apprenticeship.

Michael Guidry is making a valiant attempt to ignore his own growing self-doubts about America’s health care system as he works as a diagnostic technician at the Med-Met Regional Center in New Orleans. But when he accepts a fiery attractive stranger’s dinner invitation, Guidry has no idea she is leading him straight into a desperate battle with a powerful corporation, a deadly epidemic, and his own conscience. As the death toll rises from a lethal virus, Guidry and the Hippocratins must do everything in their power to control the epidemic—and the forces of Med-Met who are determined to protect their interests, no matter what the cost.

In this sci-fi thriller, a medical conspiracy unfolds and holds America’s health care system hostage as the future of medicine hangs in the balance and a group of humanitarian physicians and their latest recruit attempt to conquer something much bigger than themselves.

Alan Miller MD, PhD, is an oncologist and cancer center director who has published over sixty peer-reviewed scientific articles. He and his wife, Ellen, live in Dallas, Texas they have three children and two grandchildren. This is his debut novel.