The Truth Does Set Us Free

I Was Spiritually Bankrupt and Didn’t Even Know It! 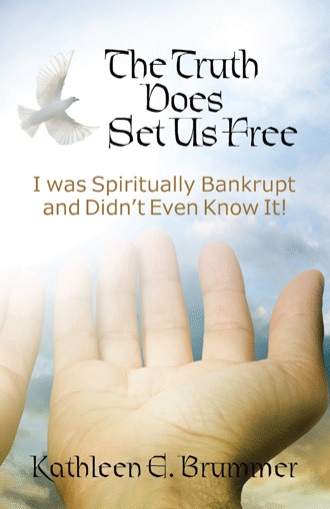 I knew that OA (Overeater’s Anonymous) had answers to the questions that had plagued me about my eating. But, in spite of myself, my intake seemed to get worse as I attempted to wrap my mind around this new concept of powerlessness. “If I can’t control my eating, why try?” My sponsor met with me to delve into these new concepts.

For several months, I still floundered. I saw, for the first time in my life, that compulsive eating was a vicious cycle for me. I was either dieting or eating freely and saying “The heck with it!” I really desired recovery. And, I started to see the unhealthiness in many of my relationships. Burying my feelings with food no longer served me as a positive way to cope with life. Still I struggled with my compulsion.

Six months later, I went once again to my recovering clergy friend. “I’m really struggling”, I said. He listened to me for some minutes, and then said to me,”You haven’t claimed spiritual bankruptcy, have you?” Powerlessness, the foundation of the 12 Steps of recovery is built on knowing that I was physically, emotionally and spiritually bankrupt.

I knew that I was physically bankrupt, for my body had a lifetime of being abused with overeating and dieting. My weight was either going up or coming down.

Emotional bankruptcy was also not difficult for me to claim. For, emotionally, I was either ‘high’ on life or ‘down’ on life. I was rarely in-between.

But spiritually bankrupt? Spirituality and religion had been the focus of my life up to that point. For me, spirituality is connected with choices I make and how I live out my values. Religion embraces the beliefs I take on from my church. I believed in God and simply could not imagine how spiritual bankruptcy applied to me.

“Well,” my friend continued, “You won’t recover until you do!!!!” I felt as if I had been hit by a two by four inch board! Leave it to this clergy person to not mince with words!

I left his office trying to wrap my mind around this concept and remember looking up at the dark sky and praying simply “Well, God, I guess I don’t know you!”

Beyond my wildest imagination, I felt my entire belief system removed from me at that moment. I perceived a blank sheet inside, upon which a new start would take place. As I look back at this challenge, I feel so much gratitude - that someone could understand what I needed and love me enough to be that honest with me! Without that challenge, I could have gone on floundering for months or years!

What was I letting go of? At that point in my life, God was outside of me and not within me. My image of God was built on what I had been taught, and not on my life experience. My God judged, sometimes harshly (good heavens, look at the God of the Old Testament!). And, God called me to accountability. I didn’t know what to do with my feelings such as anger, or with shame. I guess that they were so buried in me that I was hardly aware of them! My spirituality to that point held many ‘shoulds’. I was not at peace with myself, and surely not free!! My ‘religion’ was built on negativity - “Thou shalt not….” In spite of ‘being taken care of’ many times to that point in my life, my head still held the God of my childhood. But, suddenly, all that was all gone.

I felt a great void inside. Being a good ‘do-er’, I thought of going to a Bible study to attempt to fill this void. But, again, I was sent the messenger and message that I needed to hear…”We do not control our relationship with God. God will reveal himself or herself to us in his or her time.”

So I lived in this void. In time, my experiences started to speak to my heart.

Compelling testimony of Author’s awakening which radically changed her spirituality and understanding of life. Read of experiences and insights that fortify her new direction.

Kathleen was born in rural Minnesota. After High School she joined the religious life, believing that this decision was a good one for her. She and her family valued their faith, and her two older sisters had gone to the convent. Because of this, Kathleen had a positive exposure to this way of life.

But she was not free in her beliefs or in that way of life. Only in time did she come to listen to her heart and leave the religious life.

Readers will witness her journey and her arrival into a program of recovery which challenged her to let go of her concept of God and develop a new relationship with God. In doing so, she came into a freedom she had never known before, and she wants to share it.

Kathleen is married and has a husband and two sons.