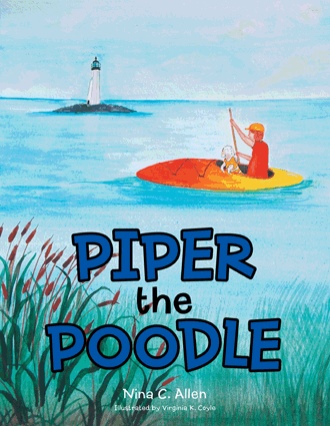 Piper the poodle had been sitting out on the wooden dock in front of her house most of the morning watching her daddy put fresh bait in some crab pots and taking out wriggling, blue-clawed crabs from other pots. She watched as he carefully measured them against his wide-spread hand and tossed some back in the water, where they quickly sank down to the sandy bottom and scurried happily away. She didn’t like crabs because she was scared of their strong claws nipping at her nose or her toes, but she did enjoy watching them running around- just as long as they didn’t come too close! She lay on her back and stretched out her four legs to feel the warm, early- summer sun on as much of her body as possible, and sniffed the sweet smell of honeysuckle in the air. She could hear the gentle lapping of the water against the pilings as the tide started to come in from the Chesapeake Bay, and the noisy squawk of sea gulls swirling and diving for fish in the water. Her eyes started to close and she was about to fall asleep when a great blue heron flew right in front of her with a loud screech. Startled, she stood up and toppled off the dock, right into the mud along the bank.

The mud was slippery, sticky, slimy and smelly. It was also very hard to move in. The more she struggled to stand up, the deeper in she sank. Tiny, little fiddler crabs ran sideways all around her and that made her even more nervous. She struggled to pull herself out, but she just didn’t have the strength. The water was beginning to come in faster now, and the sea grasses and cattails started to wave as the ripples hit them. Suddenly two large hands grabbed her and lifted her up and away from danger. Her daddy must have seen what had happened.
“Silly dog!” he said, but he smiled as he said it.
Then –oops! He too slipped in the mud, and sat down with a big, wet thump. 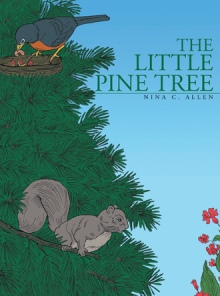 “Piper the Poodle” is about a spirited, little puppy that is hoping to find a “forever” home with a loving family. She is not quite sure however that she will always be part of her current family as her little black nose can get her into a lot of trouble. Does adoption last forever? Are there limits to love? Will Christmas work its magic?

Nina C. Allen grew up on the Sussex coast in England, but came to the U.S.A. as a young bride. She has lived in Vermont, Massachusetts and Virginia, where she taught high-school level French. She enjoys her human and animal families, reading, writing, traveling, cooking, gardening, art, history and nature walks- especially by the water. She lives in Tidewater Virginia with her husband and their poodle, Piper.


Virginia Coyle, the illustrator, also lives in Tidewater Virginia with her family.