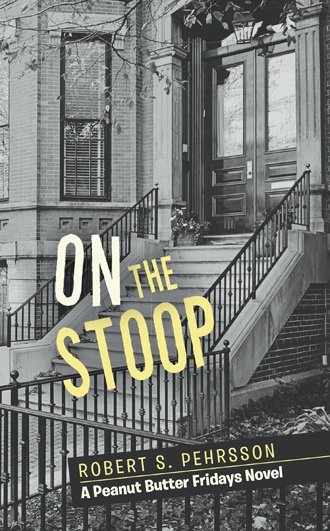 It is now about one hour later when Mr. Joey Pits opens the door of his apartment house across the street, a couple of doors down, and out steps Natasha Natasha just as beautiful as she is one hour ago. They stand talking for about five minutes and every once in a while Natasha Natasha glances down at her wristwatch and Mr. Joey Pits turns his head and looks up Leonard. The Fleetwood is late but that is no problem for me. I look real hard and squint to get a real good look at Natasha Natasha. When she turns around I can see the seams on the back of her nylons are straight as an arrow. The seams rise up from her high heeled shoes and disappear under her red skirt.

Nicholas is saying something but every one of my senses is distracted more than somewhat. My mind and much more of me is on the vision of Natasha Natasha. I am standing on the stoop, stretching my arms to grab onto the step above. I am doing my best so not to fall. Beautiful girls get me dizzy.

But then Nicholas speaks again and I hear him say, “I got this very worried feeling that something real bad is going to happen today.”

“Nicholas,” I say, “what could possibly go bad what with that beautiful Natasha Natasha standing there with Mr. Joey Pits?”

Nicholas says, “Well maybe there is the something bad right there and maybe its name is Mr. Joey Pits all duded up in his double-breasted Dapper-Dan zoot suit.”

But very soon we find out that the something bad is not Mr. Joey Pits. Nicholas’s feeling about something bad happening is indeed a correct feeling. Sometimes I should listen to Nicholas and this is one of those times because as Nicholas is going on about this and that and one thing and another and while Yours Truly is deep in thought and feelings about the vision of Natasha Natasha, we do not notice a black Packard slowly easing on down Leonard.

Although I do not at first notice the Packard, Mr. Joey Pits turns his head, takes Natasha Natasha’s arm, whispers in her ear, and they both turn around and step back into the apartment house. I can see Mr. Joey Pits looking out the glass window in the middle of the door. By the time I see the Packard, it is moving fast, pulling into a space directly in front of the stoop and screeching to a stop.

The two front doors open and two nicely dressed men step out of the Packard, walk across the sidewalk, stand very still directly in front of the stoop and look at Nicholas and Yours Truly. The nicely dressed man on right opens his jacket, pulls it back with his left hand and with his right hand pulls a pistol out of a shoulder holster.

“We come for the relics. We know you two have them and you will give them to us one way or the other.”

“Relics?” I ask. “What are relics? I do not have the slightest idear what you are talking about.”

As a sort of a response the nicely dressed man on the left opens his jacket, pulls it back with his right hand and with his left hand pulls a pistol out of a shoulder holster.

To lighten the conversation I nod to the nicely dressed man on the left and ask, “Are you left handed? In spite of what the nuns tell us at St. Mary’s that is nothing to be ashamed of. I read in the Brooklyn Diocese newspaper, what is called The Tablet, that it is not true that the left hand is Satan’s hand.”

The nicely dressed man, to whom I address my last remarks, speaks as follows, “Kid, if you do not shut your trap and hand over the relics, you will be visiting Satan very shortly.”

Nicholas adds to the conversation, “What Earnest says is true and I do believe that sometimes nuns do not tell the whole truth about a thing. See when a kid is left handed, they try very hard to get him to write with his right hand.”

I add as follows, “This is also true that nuns are not all that truthful about going blind by touching yourself in certain places what I do not mention here. I know this because Dennis Bowalski touches himself all the time in that very place.”

Nicholas adds, “And Dennis Bowalski even does more than that for many years and he still sees real good.”

I nod my head in agreement with what Nicholas. I say, “It is true that Dennis Bowalski does touch himself very often and for a very long time but his vision is not impaired in the slightest.”

Nicholas adds support for this statement, “It is true Dennis Bowalski does not even wear glasses.”

The nicely dressed man on the right begins to speak, “If you kids do not shut your…

But this man does not get to complete his sentence because he and his nicely dressed partner are suddenly face down flat on the ground.

Nicholas looks down at the two nicely dressed men who are just regaining consciousness and adds a thought, actually a regret, “You two will need to send your nice suits to the cleaners.”

Big Boris slowly puts his pearl handled pistols in two holsters, one on each side of his belt. Then he looks at Nicholas. He smiles and says, “Nicholai malchik stinky foot! More than suits go to cleankers.”

After all our conversations run their course, Big Boris looks at Nicholas and Yours Truly and says as follows, “Eto pilkho! It werry bad here for you. Para eettee. Vat I mean isht I vant you two malchik go into partment hoose. Avodna! Right avay. You malchiks Earnest and Stinky Foot say not word about what is here. Ponumayu? Unnerstand?”

Nicholas and Yours Truly nod our heads to show we agree but Big Boris fails to notice that my right hand is behind my back with my fingers crossed. Other than that, we do eggsactly as we are told.

We go up the stoop, into the apartment house and as we are climbing up the stairs, Nicholas says, “I hate it when Big Boris calls me Stinky Foot. A name like that could stick with a guy.”

I do not say another word. I just keep my mouth shut as we climb the stairs to the roof and look down into the street. The Fleetwood is gone, the Packard is gone, the two nicely dressed men are gone and Mr. Joey Pits is standing in the doorway of his apartment house looking down Leonard and smiling. No trace of any problem. All is back to normal.

Eleven year old Earnest wants the summer of 1952 to be adventurous. So he cons his friend, Nicholas, into believing a saint directs them to save the world from Commie spies. Earnest learns much from, Guys and Dolls, a book he finds in the garbage. Applying what he learns, Earnest cons Lucky Luigi, a bully, out of a dollar. But then their lives become “complexicated.”

After receiving a sign that the Commies are “infilterating” their Brooklyn neighborhood, Operation Top Secret is born. While investigating “Commie’s Headquarters,” Nicholas bumps into a thief who has just blown a mob boss’s safe. After the thief drops the bag into a sewer, the boys fish it out and discover it contains sacred relics. Earnest and Nicholas hide from mobsters who will do anything to find the bag. Gutsy Gus helps the boys out of this and other jams. Suspicions increase when a limousine stops in front of the stoop and one very classy doll with a Russian accent pays a visit to Gutsy Gus.

On the Stoop shares the rollicking adventures of two Brooklyn boys as they investigate suspicious events while dreading an even bigger problem: the nuns at St. Mary’s.

Robert Pehrsson attended Catholic schools in Queens and Brooklyn and began his teaching career at Public School 18. He taught at universities in New York before moving to Idaho State University where he achieved the rank of Professor of Literacy Emeritus. Robert, who currently resides in Mount Pleasant, Michigan, is the author of many professional articles, books, and Peanut Butter Fridays.