King Stephen, the Silver Man, and Greta the Witch 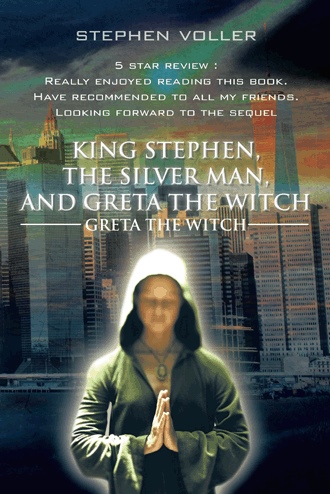 In the court of King Stephen of England in the year 1136, there is a cunning courtier called Greta the Witch. Greta has a terrible vision of the future and a vision of a strange silver man, a traveler from another world. The king has a secret of his own and plots an elaborate deception. Greta follows the king and two of his men-at-arms, and the four of them encounter the silver man while he is monitoring mankind’s progress. The silver man freezes the four of them in time. Nearly a thousand years on, and the silver man returns to Earth. Mankind’s technological progress is a threat to his people, and the Earth must be destroyed. But an eccentric British scientist working with a top secret group at NASA detects the silver man. The scientist causes a freak accident that transports King Stephen, his two men-of-arms, and Greta forward almost a thousand years in time to the modern day. King Stephen and his men-at-arms capture the British scientist who is accused of murder. The US military capture the silver man, and an elite team is set up to try and understand the visitor from another world. They conduct the work in secret, but try as they may, even the highest levels of the US government do not seem to be able to keep the story away from the media. The British Secret Service MI6 become involved as a tenacious London journalist reveals details of the strange goings-on in the quiet Hampshire villages of Hartley Wintney and Fleet. Meanwhile, in the United States, the media manipulation becomes more difficult when the silver man changes into a baby boy. Many begin to believe that this baby is the new messiah, the second coming of a baby Jesus, a new prophet.

Stephen Voller published King Stephen, his first novel, in January 2014. The book is set around the area that Stephen lives, Hartley Wintney, Hazeley Common and Fleet, in Hampshire, England, but it also includes sections in set in London and in the USA, especially in New York. Although the first part of the book is set a thousand years ago, the rest of the novel is set in the present day. King Stephen is a work of fiction but represents an amalgam of Stephen’s life experiences in business and in running technology companies. Stephen has worked in the science and technology business for thirty years. In his last business, he set up an office at the ISIS Neutron Source at the Rutherford Appleton Laboratory near Oxford in the UK and a laboratory at the NASA Kennedy Space Center in Florida, USA. In 2004, Stephen developed the world’s first commercial CE-certified proton exchange membrane PEM fuel cell generator based on metal hydride and compressed hydrogen fuel. The system is now in the London science museum. Stephen has a degree in data processing from the University of Leeds, is a chartered engineer, and has been a member of both the Institute of Electrical and Electronics Engineers (IEEE) and the British Computer Society (BCS) for more than twenty-five years. Stephen was a judge for the 2013 Shell Springboard Awards, a competition run by Shell UK to award the best environmental companies. Stephen lives in Hampshire, UK, and has two sons.