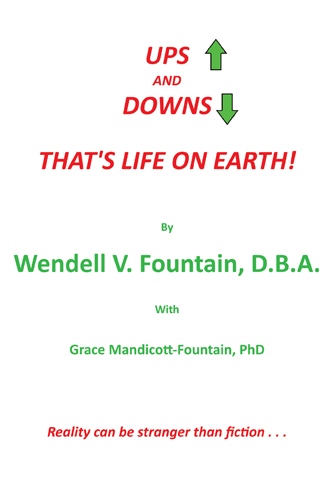 Since I'm not a Muslim Islamist extremist who wants to kill all infidels, I can't imagine what I would do with 72 virgins if I were such a person. At my age I'm lucky to take care of my one wife! Besides, virgins, what a mess! Before I really get started with this book, I think it is important to focus on the craziness of everyday happenings which lack any semblance of logic or reasoning. Let me recount a very recent incident in which my wife suffered a traumatic blow to her head, and don't you dare think I did it! This trauma prompted us to seek medical attention, so we went to a local hospital emergency room for tests. Of course, there are ALL of those forms which must be completed before you get treated in an emergency room. How much sense does that make? For heaven's sake, you're in an emergency room (ER) and in need of medical attention! Who in their right mind has the time or the physical ability to fill out these forms? We thought we were in luck, because the doctor in the hospital ER had been our family practitioner. Grace was experiencing a hypertensive crisis, so he ordered a CT scan of her brain, and then he made sure my wife got in to see a neurologist the very next morning. This doctor understands the system, because he told us months before he moved to the hospital, if you want to stay healthy, stay away from doctors. By the way, he not only is a physician, but he is also an attorney. When the next morning came, we were in the office of the neurologist. Of course, we didn't see him right away, because we had mounds more of paperwork to complete. My wife, Grace, is a retired nurse practitioner and physician's assistant (PA-C), so she is used to this paperwork nonsense and medical foolishness. I, on the other hand, have very little patience with the completion of forms. She usually does it for me and herself. When her parents were alive, who lived with us, she even took care of those repugnant, redundant forms for them as well. Finally, we were led back to the doctor, who will remain nameless, because I hate lawsuits. There he was in all his glory, unshaven, suspenders, and food stains all over his dirty tee-shirt. In minutes he made it clear that he had been doing his work for 40 years, and to me, I wasn't sure he'd ever changed clothes. He was sick himself, sitting there sucking and chewing his lozenges, and the place wreaked of various odiferous smells. Before I tell you about his diagnosis which he stated in less than three minutes to my wife and me, let me tell you a little about her. She not only is very bright, but she is truly an extravert, wild, wacky, and funny, with tons of energy, like the energizer bunny, in other words, she is very gregarious and outgoing. You should see her on a dance floor! She is without a doubt the most UP person I have ever known. This elderly neurologist had reviewed her CT scan from the emergency room the day before and said he saw no indication of a life-threatening disease or serious injury, and Grace handed him a typewritten list of her symptoms. He rejected her documentation out of hand and said, "I want you to tell me what your symptoms are. You know you look much younger than your age, and so do you." Then, he was making reference to me. He continued as he addressed Grace, "You are suffering from depression! That's something we can take care of." Now, if he had said anxiety and/or hypertension, I could have bought that if he had examined her, because she like her late father before her can definitely be classified as worriers, but no, he had to call her depressed. If she is depressed, then I hope I never see her in a normal happy state, because she would definitely be more than I could handle. As you read this, I bet you're thinking that I'm embellishing and exaggerating my account of what went down. I don't blame you if you're thinking those thoughts, but this is not a fictional account of this bazaar encounter. This is the way it really happened. You can't make this stuff up. Can you imagine how many women he has doped up over the years, and how many more he will treat this way, at least as long as he lasts as a neurologist. If I have ever met a physician who should retire, and I have, this guy needs to find a fishing pole and a lake filled with hungry cold-blooded aquatic vertebrates which do not need to be psychoanalyzed--just caught, cleaned, cooked, and eaten--unlike what Louis Zamperini and his raft mates had to do during 47 days of floating aimlessly on the ocean in the movie Unbroken (2014).

Depending on the time, place, and situation, you might be on an express or a freight elevator. One minute you have an unfettered view for miles around, experiencing a natural high like Slim Pickens riding the rocket bomb in Dr. Strangelove (1964) and the next you might find yourself rummaging around in the dark basement. Unlike a rollercoaster, the ups and downs of life are NOT predictable. One minute you’re sailing into the stratosphere and the next you’re in an underground tunnel without light on either end--that’s life on Earth! I have always been under the impression that the people of South Korea like Americans, until I spent some time there. It didn’t take me long to discover that, at least some college students, had no use for us at all! Though I have been known to like a cocktail or two, I do not like a rain of Molotov cocktails! For that matter, when it comes to food, I am not fond of raw squid or Kimchi. I prefer the white pizza in Rome where I can dine on a red and white checkered tablecloth at a sidewalk cafe with the woman of my dreams.

Wendell has been CEO of Fountain & Associates Business & Management Consultants since 1984. He is an Author, Speaker, and Credit Union Strategist. He holds a B.A. degree in psychology, from the University of North Florida, an M.A. degree in human resources from Pepperdine University, and a doctorate ( D.B.A.) in business administration from Nova Southeastern University. Wendell’s post-doctoral studies include Harvard Business School, The University of Chicago Graduate School of Business, and the Wharton School of the University of Pennsylvania. In addition to his work as a business consultant, he has taught undergraduate and graduate courses for various colleges and universities around the U.S. In much of his work he traveled extensively both nationally and internationally. He currently resides in southern Nevada with his wife Grace. Grace Mandicott-Fountain, PhD is EVP of Fountain & Associates Business & Management Consultants. She is also Editor and Proofreader of her husband’s writings. She has a rich background in the medical field. Originally, Grace began as a nurse and later became a nurse practitioner and physician’s assistant (P.A.) in Upstate New York. Her specialty was internal medicine. Later, she completed her doctorate in healthcare management. Upon her relocation to Florida, she expanded her interests by concentrating on the physiological issues of women. She conducted many seminars and training sessions regarding the health and wellness of females. For more than six years, Grace taught graduate school for Central Michigan University. Currently, she assists her husband in his writing and the consulting practice in Nevada.