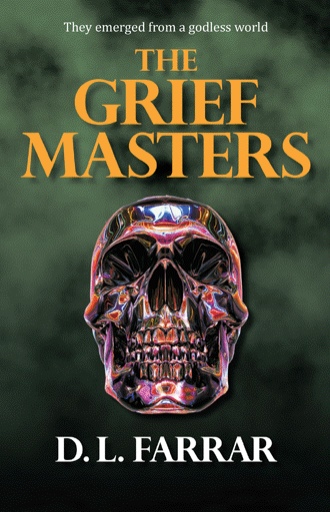 “The stories of these…these things…called the Grief Masters lurking in the VRCs…they’re just a myth. It’s nonsense. There is no proof that any VRC treatment has ever been interfered with by these so called Grief Masters.”

Mr. Tyler shook his head in disagreement. “Well, unfortunately, not many survive the VRC to provide proof of their existence. But it is rumored that in cases such as this, ones that are questionable, they may be involved in the outcome.”

Mr. Robertson added, “I have heard that they sometimes appear to those with a faith based background.”

Mr. Leigh interjected. “Well, they are rumors, are they not? This could be coming from the factions of resistance that are out there. They’re just stories. But I, too, think this case is questionable. I agree with my colleagues.”

Adams stood up and threw his pen down on the table top to make his final point.

“This man hated SamWong. He threatened him, he stole from him. I believe he’s guilty and I think he should be ordered to the VRC. He won’t survive. I guarantee it,” he said with conviction. He leaned forward placing his fingertips on the table and looked around at the other three.

“And there will be no appearance of any Grief Masters. Period.”

“Uh, sirs? There’s an urgent communiqué coming through on this case from this month’s sponsor. I’m forwarding the message to your monitors.”

Adams sat back down. The attorneys turned back to their monitors and the message bannered across the top of the split screens.

The banner scrolled across twice then ceased.

Mr. Tyler was dismayed. “That’s odd; I don’t understand the reason for this.”

Mr. Adams nodded his head in agreement with the banner.

“There’s our decision, gentlemen. No need to even vote on it.”

Mr. Robertson objected. “I don’t agree; the sponsor must stay objective. They have always stayed objective and out of the judging chamber.”

Leigh leaned over to Robertson. “Looks like someone will get his way after all - again.”

Adams turned to the court clerk and signaled to turn the microphone back on.

The few minutes of silence had been unnerving for Troy Vincent. He was apprehensive but relieved when he heard the microphone click back on. He hoped he would head toward the exit door in another minute; to freedom or he wasn’t sure what.

The disgruntled voice of Mr. Leigh delivered his fate.

Troy was pulled from the chair to his feet by the two attendants.

“Your case has been reviewed and the evidence weighed. You are ordered to proceed to a Virtual Reality Chamber for treatment and judgment by your own hand, to face destruction by your own demons for the murder of Hoy SamWong. This concludes the hearing of case number 924.”

The verdict was short and quick. The microphone clicked off.

Troy was immediately pulled toward the door by the two security attendants.

“Hey, wait,” he objected as they half dragged him along. “Who are the Grief Masters?” He shouted at the black mesh. He repeated his question louder.

There was no response. He was pushed through the door and into the hall.

Once outside the exit door, he realized he was in the same spot where he had seen the young man go down under a pile of security attendants. Troy decided he would not meet that same end and instead think through his current options, which looked to be none at the moment. With a security attendant on either side of him, he regained his composure and took a deep breath. The door opened and the three men stepped into the elevator.

In the dystopian future of the twenty-second century governments have collapsed and corporations have joined together to create a new world order called corporate rule. Veteran and businessman Troy Vincent, is wrongly accused of murdering a powerful CEO in a world where a cruel and corrupt justice system has emerged. He is sentenced to face termination by his own demons in the feared Virtual Reality Chambers. Before embarking into dark and dangerous worlds, Troy is befriended by an android who advises him to seek help from the elusive Grief Masters.

A beautiful condemned woman is thrown into Troy’s surreal world. Together they must unravel the truth behind the crimes they are convicted of, while fighting the treacherous forces that promise to destroy them. Their only hope of survival lies in hidden keys to the Grief Masters. However, finding a key means digging deep into their shattered inner souls. As the android tries to help them, he faces his own destruction and an unexpected meeting with the ultimate Grief Master.

D. L. FARRAR writes inspirational stories, stage plays and music that speak to the heart. In addition, she has played violin with multiple orchestras and sung with numerous groups including a nationally recognized Christian choir. She has performed on stage in musicals and drama presentations since the age of 15. Costume design and stage direction are among her many hats. D. L. feels the best way to communicate God’s love is through all the senses. She has combined the illusion of music and color through vivid visual imagery into the story of The Grief Masters for an all-encompassing journey for her readers.