GRAFFITI WAS HIS LIFE -- AND SOUL (Theatre/Screenplay Version) 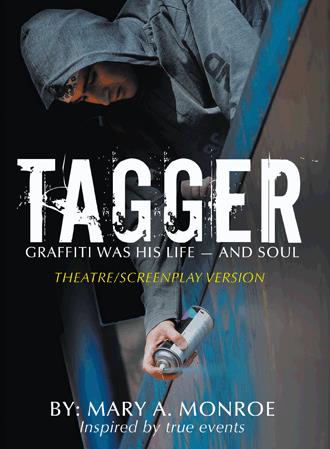 Act 4, Scene 3 (The walkway to Hardin County High School, in front of a large blank wall. Tagger is walking alone; Catfish and Sasha are walking toward him. Catfish is wearing his usual T-shirt with a picture of a huge catfish on it.) Catfish: Hey, Tagger, where the heck have you been? You ‘bin missing a lot of school lately. Tagger: Bad things ‘bin happening, man. My mom was shot, but she’s gonna be okay. It was only a surface wound, and they found out why she’s been sick all these years, so it turned out to be a good thing for her. She’s gonna be better. Sasha: Oh wow! Tagger: But the leader of my crew – The Beast – he’s dead! And I can’t go to his funeral or see my mom because they say I’d put me and my family in danger because the same dudes who killed The Beast? Well, they wanna kill me too. Catfish: Man, why’d you want to go to his funeral, Tagger? Isn’t that the dude who beat you up because he thought you ratted them out? Tagger: Yeah, that’s him, but I never did blame him. If I hadn’t taken photos of our work with my cell phone, maybe everything would have turned out differently. Man, we were tight once, you know, like brothers, and he was my homie. Now he’s dead. Catfish: But, you’ve left that all behind you, right Tagger? (The Rat, Rubber Band and Sissy join them.) I mean you don’t ever get the feeling to do graffiti on any of the walls around here, do you? (Catfish gestured over to a blank wall on the outside of the school walkway.) Tagger (walking past the wall with his new friends): Naw, man, I’m over all that. (The group walks away, talking, but Tagger looks back at the wall.) Tagger: Hey, I forgot something. Don’t wait for me. (Tagger dashes back toward the wall. The others keep walking. He looks at the wall like it has a hold on him. He gestures with his hands like he’s spraying the walls, but it’s just imaginary gestures.) Tagger (to himself): Good thing I don’t graffiti walls any more, because that wall is just calling out to me to tag it! (He shakes his head and jogs up to meet up with the group. Lights dim on stage.) Act 4, Scene 4 (Luis’s bedroom. He is sound asleep in bed and an angry dad is yelling at him.) Dad: What the heck’s the matter with you? Are you stupid or something? Don’t you realize that you can’t open yourself to new opportunities if you keep living in the past? Luis: What time is it? Dad: It’s time for you to have been up and in school. But I see you went for one of your night walks again last night, judging by the looks of your boots covered with mud and leaves. And you decided to skip school again and slept through half of the day. Luis: I told you I had a sore throat. Dad: Bull. And doing graffiti on school property? And you honestly thought you’d get away with it? Luis: Sorry, Dad. I have no idea what you’re talking about? Dad: Don’t try to B.S. me any more Luis. You didn’t have any sore throat this morning – you had been out all night tagging around town. Here’s your clothes from last night. The principal discovered your tag on the wall after students were grouped around it this morning. Luis: Discovered what tag, Dad? (Luis sits up in bed and looks him straight in the eye.) I didn’t tag anything. Yes, I walked around town last night because I couldn’t sleep, but that’s it. Dad: Do you think I’m a fool, Luis? Your tags are all over town. Rheono and Tiny – both tags were sprayed on the school, storefront windows, street lights, everywhere. The only thing worse than doing a crime is denying the crime. At least be a man and admit what you did! Luis (yelling): I didn’t do crap! (Dad lifts his massive arm over Luis like he’s going to smack him in the face and head. Luis cringes backwards. Dad’s arm freezes in mid air and then he brings it down to the side of his body.) Dad: Don’t think I won’t hit you boy. I, unlike you, do know what consequences are. Even though you deserve a good smack across your face, I know it’s not right to hit your kid – so I won’t. But did you ever think of what position you put me in? Your principal called me because I’m her friend. She’s letting you off easy. You have to re-paint over the wall and attend addiction rehab counseling sessions with the school psychologist. Get dressed NOW! You have to face the consequences of what you did. We’re driving over to school and you’re completing step 1 – painting over that wall. Now get moving! (Dad and Tagger go to the school, where he is greeted with paint to repaint the wall, which now has a huge graffiti design on it, complete with his tag. A large crowd of students are watching him.) Tagger (feeling dizzy, shocked with disbelief): I didn’t do – I don’t know how – I must be crazy. I have absolutely no memory of doing this. (Tagger robotically paints over the wall, then he and his father go to the other areas, building windows, stoplights, painting over the tagging. Dad walks off and Luis is left center stage with spotlight on him. He takes out his cell phone and reads aloud his texts.) Tagger: Hi Marisol. Losing my mind. Tagging again and don’t even remember doing it. I’ve gone crazy. (Mumbling to himself.) Where are you Marisol? I need to talk to you? (Reading aloud his texts.) Where R you? R U okay? (The lights go down.) 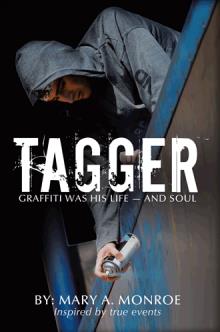 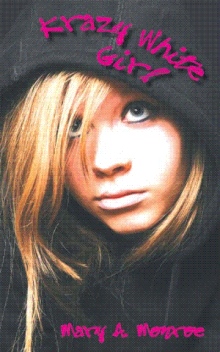 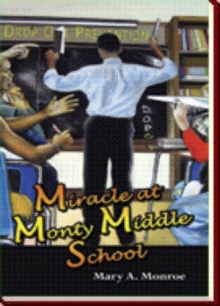 "I love using Reader's Theatre in my classroom," . . . "When will they make a movie out of your books?" . . . "I love performing arts!" Comments such as these from loyal fans and teachers motivated Mary A. Monroe to write a Theatre/Screenplay version of her popular teen novel, Tagger. Now Luis and his friends, including The Beast, Grill, Loco, Catfish, The Princess and more, come to life in this easy-to-read and easy-to-act-out version of the original novel. Tagger is the story of Freshman Luis Arteaga, 14, who can't stay awake in class at Sunrise High School because he's up most nights until early morning working on graffiti drawings for his Black Book. Once Luis teams up with a crew called Skillz, headed by The Beast and Grill, his life gets more and more out of control until he's forced to move to his dad's home in a small midwestern river town called Cave-in-Rock, rich in mystery and heritage. Luis feels he is being called to the cave to do something -- but what? This is Luis' fascinating play, inspired by true events. Now theatre students in middle and high schools can share this exciting story with viewers across America. As well, since Cave-in-Rock has been the unforgettable setting for major motion pictures in the past such as "How the West Was Won," isn't it time for a new hit teen motion picture -- Tagger -- to premiere in film? The undeniable answer is "Yes!"

“Teens love this book,” ... “I was pleasantly surprised to see the book fly through the classroom,” -- these are just a few of the many comments teachers have said about Mary A. Monroe’s trilogy of novels for middle and high school students. Her titles include Miracle at Monty Middle School (also available in Spanish as Milagro en la Escuela Monty), Krazy White Girl, Tagger, and now, by popular demand from readers' comments such as, "When will your books be made into movies?" the Theatre/Screenplay version of Tagger! Tagger is inspired by the true story of one of Monroe’s former students whose story just had to be told; he had been hopelessly addicted to graffiti art at age 14, staying out on the streets until early morning. Graffiti was his life, until it jeopardized everything he wanted, including his high school diploma. Recently named Teacher of the Year for Palm Beach County, Florida, Mary Monroe writes about topics that happen in real life to her students – family problems, addictions, abuse – as well as things that are important to young adults – setting and reaching dreams and goals, making friends, having that first crush – and just keeping it real. Ms. Monroe also appeals to teachers by having complete unit questions, activities and reading counts quizzes available free on her website. She is a former freelance writer and advertising copywriter, who currently teaches English at a public high school in South Florida, where she resides with her husband and three children. She is a National Board Certified teacher and has a Masters in Education, Reading. Her goal is to entertain and inspire her readers to get hooked on reading! For more information on ordering her books, and free teacher study guides, visit her web site at www.marymonroebooks.com