A Mistake of Consequence 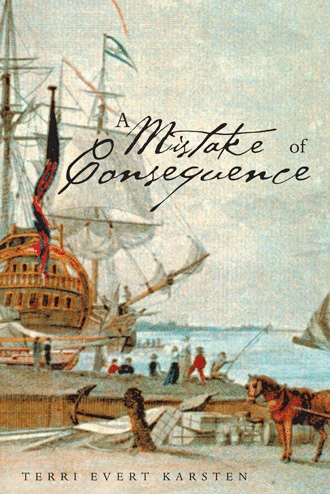 … two other men emerged from the shadows of the waiting cargo. I sucked in sharply as they slid to
either side of me. I turned to run, but they grabbed my arms, their fingers digging in painfully.
“Let go of me!” I twisted, trying to pull free. “Help! Someone!”
The chicken man nodded, and the scoundrel on my right jabbed me hard in the ribs. I sagged and
gasped for air, just as the other fellow hit me in the jaw. Pain blackened my vision and turned my legs to
jelly. The man on my left caught me neatly and scooped me up like a child. The other tore away the lace
at my bodice with a swift jerk.
“Taken a bit faint, sir,” he called out, presumably to the chicken man. It had all happened so fast
no one on the dock even noticed.
I struggled, but none of my limbs quite worked. The dark, scruffy face of the man carrying me
looked fuzzy through the watery haze of my tears. Even my voice refused to obey. Had the blow broken
my jaw?
The gangplank swayed underneath us as the man carried me. Fighting dizziness, I tried to escape.
Then, as suddenly as he had picked me up, he dropped me. I managed a squawk before someone caught
me and pulled me down into the darkness made thick with the stench of bilge water and mildew. One set
of grimy hands after another shoved me forward, away from the hatchway. Still dazed, I had a brief
impression of dozens of faces blurred in the gloom. I was deposited on a plank of wood. I lay there, my
head throbbing.
More humans were crammed together in this narrow space than I could imagine. I gagged on the
odor of sweat and unwashed bodies. Grandfather had bellowed at me for years, but no one had ever hit
me. The shock of the blow as much as the pain left me speechless. The calls and curses of the crowd
blurred into an indecipherable roar, and the formless, jerking shapes around me were too fuzzy to be
real. Or perhaps I was the one no longer real.
I covered my face with my hands and moaned. But the ache in my jaw was far too insistent for
this to be a dream. Unbelievable as it was, I had been dumped in the passenger hold of the ship I had
seen moored, and I was stuck here along with a good many other people.
That thought set me reeling again. For all the years I had spent in the harbor town of Leith,
within the sight and smell of the water, for all the times I had escaped my tutors and my maids to sit on
quays and watch the great tall ships, I had never set foot on board one, not even a small schooner.
Grandfather had said my desire to feel a ship beneath my feet was only romantic twaddle brought on by
reading foolish novels like Robinson Crusoe. Mam merely said 'twas unladylike, and that was that. It
had been rare in my life for me to agree with either Mam or Grandfather, but at this moment, I would
have sworn they were right.
Still shaky, I worked my way back toward the lighter grayness that marked the hatch. But more
people crowded down into the dank hold, jostling me away from that opening. I had to duck to avoid
hitting my head on the low crossbeams. I jabbed my elbows into backsides and ribs, shouting as I did so.
But the general uproar drowned out my voice. One lusty woman shoved back at me, her elbow hitting
me squarely in the ribs and her ample hips knocking me into another bunk. The crowd was so thick it
seemed a tangle of disconnected arms and legs and bundles writhing with a dizzying energy. Someone
stepped on my hand as he clambered into a berth above me, and a rough burlap sack filled with hard and
smelly onions banged into my head. I clutched the rough wood to keep from falling. By the time the dizziness passed, the congestion had thinned out, not because there were any
fewer people, but because most had settled into their places. A few had hung punched tin candle lanterns
from the overhead beams. Swaying pinpricks of light cast a pox-like pallor on the grim faces
surrounding me.
The narrow aisle between the rows of bunks was nearly empty for the moment. I pushed my way
back toward the ladder, grabbing the rough wood frames on either side of the aisle for balance. No one
stopped me, but no one moved aside either. Just as I reached for the first rung, someone lowered a water
barrel down, missing me by inches. I fell back to make room for the water and the burly workers who
manhandled it through the opening and into position behind the ladder. I started up a second time, but
two empty buckets and a lantern followed the barrel. Finally, the way was clear. I could see a square of
dim sky through the opening above me.
Grasping the sides of the ladder, I pulled myself upwards. No sooner had I set my foot on the
bottom rung, when the heavy hatch cover overhead was dropped into place with a thud. The shock of it
knocked me backward. The hem of my gown caught on a ragged splinter and ripped as my back hit the
floor with enough force to knock the wind out of me.
For a moment everything stopped, but the silence following my fall was so brief I wondered if I
had imagined it. In the shifting lantern light, the ordinary wooden ladder looked like a scarecrow from
the other world, waving spindly arms as if to ward me off. With a shriek, I clawed up it, shoving my
shoulder against the hold door.
“Help me!” I screamed.

It is 1754 in Edinburgh, Scotland. Callie Beaton is nearly twenty, single, and determined not to marry anyone her grandfather deems worthy. But after her impulsive flight from yet another unwanted suitor leads her to the pier one rainy evening, Callie is mistaken for someone else and dragged aboard a ship. Trapped in a dark hold and at the mercy of strangers, Callie has no idea the ship is headed for a bustling port city across the ocean in America.

Wracked with seasickness, unable to convince the ship’s captain she is not who he thinks she is, and with only one tattered dress to her name, Callie somehow survives the horrid journey. She arrives in colonial Philadelphia penniless, nameless, and alone in a strange place. Two men offer her help: Ethan Asher, a handsome gentleman with a hidden past, and Davy McRae, a charming ship captain with a dangerous secret.

Neither seems trustworthy, but when tragedy strikes, Callie is caught in the middle and must choose one of them to help her if she is to save herself and her newfound friends from disaster.

In this historical romantic adventure, a Scottish lass who finds herself in the wrong place at the wrong time unwittingly embarks on a journey across the ocean to a new beginning where she searches for love, belonging, and ultimately her true destiny.

Terri Evert Karsten is an award-winning author who has interests in history, travel, and the outdoors. She has written dozens of short stories and two nonfiction books, From Brick to Bread: Building a Backyard Oven and Snags and Sawyers: 2000 Miles Down the Arkansas River. She currently resides in Winona, Minnesota.