Africa: The Glory, the Curse, the Remedy

A Biblical Perspective of the Africa Predicament 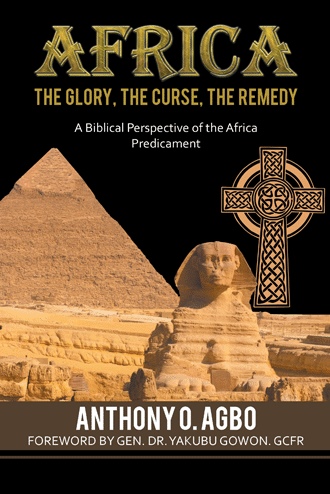 The book provides biblical explanation as to why Africans are different from other races of mankind: why they are black; why they are poor (in the midst of plenty); why they were enslaved; why they are ravaged by diseases; why they are dominated and humiliated; why they have problem of leadership; why they are burdened by disunity, war and strife; why they lack imagination; why they are lazy; and indeed why they are a “base” and “lowliest” of nations. It is a book that should have been written several decades ago so as to provide crucial guidance to leaders, opinion molders and men of God, particularly of African extraction.

The central message or theory being propagated by the book is that in ancient time, God honoured Africa with extraordinary knowledge, wealth, wisdom and power; and they ruled the known world of the time. But they ruled on the platform of idolatry, witchcraft, sorcery, spiritism, divination, ancestral worship, esoteric magic, pride, apostacy and direct confrontation with God. And the anger of God was kindled against them, and God pronounced elaborate curses on them which brought their fall.

From the medieval period through the renaissance; the Caucasian, anglo Saxon race (Europe and America) and the Mongoloid race (Asia) through their fervent Christianity and Islamic monotheism respectively embraced God; and wisdom, knowledge and world domination fell into their hands.

Europe build cathedrals, translated the Bible, wrote immortal Christian hymns, propagated monastic life, sent out missionaries to Christianize the world; and romanticized the beauty and elegance of Christian valour, holiness and fervent pursuit of saintly honour. Their aristocracy and temporal sovereign subjected the symbols of their wealth and imperial crowns to the dominion of the cross and the hegemonic authority of the papacy. Their blessing came in torrents and today, they rule the world. Africa, enmeshed in idolatory became blinded, noted for base characteristics and hence fell into total irrelevance.

The (African) continent did not just fall into total irrelevance alone, but it descended to the ignoble and base level of being like a private property of other nations which they subdued, balkanized, subjugated and exploited through slavery, colonialism and neocolonialism. This situation perfectly fulfils the scriptures, which says:

Ask of me, and I shall give thee the heathen for thine inheritance,and the uttermost parts of the earth for thy possession. Thou shalt break them with a rod of iron; thou shalt dash them in pieces like a porter’s vessel.

The book traces the African family tree from the patriarch Noah after the great flood, through the activities of ancient Africans in Babylon, (God’s most hated city), the rebellious philosophy behind the building of the Tower of Babel by the great African and first world ruler, Nimrod; to Egypt, the heartland and capital of ancient Africa where the pharaohs elevated themselves to the level of the gods and institutionalized idolatory and apostacy as state religion.

It highlighted the phenomenal and unprecedented greatness of Africa in ancient time in all spheres of human development and greatness indices.

Researching through deep and rare ancient authorities, the book gave elaborate treatment to the character and personality of the amazing ancient African and the all –time greatest world ruler, Nimrod, who fiercely rebelled against God, laid the foundation for world-wide idolatory and apostacy, and urged men to “depart from the judgment of God and adhere to the judgment of Nimrod”, while assuring his people that he will exert a revenge on God for2 drowning his ancestors with water.

The book established that apart from the Jews who are God’s chosen people, no other nation featured in God’s scheme more than the Africans.

It traces the present location of the celebrated Ark of the Covenant (which God instructed Moses to build and though which God communicated with and protected the Israelites) to Africa, in Ethiopia.

It raises the question of the mystery of the Black Madonna; why the image, statue or painting of the blessed Virgin Mary and child Jesus done with African (black) features perform miracles far more than when such images are done with Caucasoid, European features; and why is it that earlier than the renaissance period, medieval and ancient artists mostly depicted Mary and Child Jesus with olive or bronze skin, black hair and brown eyes characteristic of African features?

Perhaps, the most critical part of this book should be chapter 5, which deals with the curse of Africa. This chapter elaborately discusses and analyzed the concept of curse in its biblical perspective and convincingly established that Africa is under severe curse. It discussed the symptoms of the curse and extracted the fundamental reasons or transgressions, based upon which God cursed Africa. Such transgressions were noted as: The curse of Ham (the ancestor of the Africans); The sins of Babylon; The Slavery of the Jews; and Idolatory. Specific verses of the Bible where God pronounced curses on Africa were extracted and elaborately treated.

The final chapter, chapter 6 suggested remedies for the African situation arising from the curses.

I n Africa: The Glory, the Curse, the Remedy; the author Anthony Agbo in a spectacular and inspirational detail researched the bible and rare ancient authorities to establish that God through the mouths of His Prophets, pronounced broad and far reaching curses on Africa and Africans, the result of which put the continent and her people in the negative side of all indices of human fortune, growth and development.

Tracing the African family tree from the patriarch Noah through her phenomenal rise and greatness in ancient time, to her sudden downfall, the author in an amazing inspirational treatise, woven with extra-ordinary suspense unveiled: the character and activities of the enigmatic biblical figure, Nimrod, the great African and first world ruler, who built the Tower of Babel, openly confronted the God of Heaven and originated Idolatry, the worship of the “gods of wood and stone” thereby leading Africans astray; the identity and pioneering works of Tehuti, the great African who laid the foundation for all academic knowledge on earth, and who the ancient Greeks referred to as the “master of all masters” and the “greatest of all greats”; the journey of the biblical Ark of the covenant in the ancient time from Jerusalem to Ethiopia where it resides today; why and how God cursed Africa and how this curse has impacted on the lives and endeavors of the black race; what is it that can return Africa to future world dominion; etc.

This is a book of extraordinary revelations about Africa and God, her glory and curse-propelled downfall as well as remedial prescriptions.

The author Sen. Anthony Agbo is a Christian, and a carreer politician, who among other things, was a Senator of the Federal Republic of Nigeria, in Sothern-Eastern Nigeria, between 2007-2011. Senator Anthony Agbo is also a noted poet who authored a collection of poems, titled: “ADORATION OF THE KING. Poems in Honour Of the Great God”. He is a familiar face and an attractive name in the pages of the Nigerian Newspapers and electronic media, due to his lucid, penetrating and tempestuous commentaries, and ingenious and elegant ideas. Sen. Anthony Agbo holds M.Sc. in Mathematics.