An Illustrated Guide to the Prehistoric Playsets of Marx and MPC 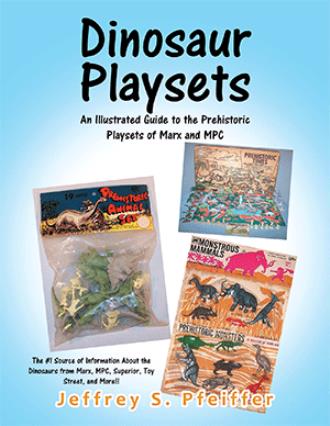 "The book that Marx and MPC dinosaur collectors have been waiting for! The most comprehensive work on the prehistoric playsets and figures of these two companies to date!

Dinosaurs have fascinated people since their discovery over two centuries ago. Perhaps the most endearing of the many dinosaur collectibles to many people are the lines of figures and playsets produced by the Louis Marx Toy Company. These figures have attained a near iconic status among dinosaur toys and memorabilia. Often considered something of a "baby sister" to the Marx dinosaur line is the series of prehistoric figures and playsets put out by the Multiple Products Corporation (MPC) at roughly the same time period. Often confused with one another, the dinosaur output of these two companies has shaped the perception of what these prehistoric beasts were like in the minds of generations of children and adults. Unfortunately, until now there has not been an abundance of serious, detailed information available concerning these popular lines of prehistoric toys. Written with the novice collector in mind, this book starts at the basics, with brief histories of each company, and moving on to their various dinosaur figures and their famous boxed playsets, their contents, accessories, etc. This NEWLY REVISED EDITION now features over 300 full color photographs of every major boxed, carded, and bagged playset available at this time of writing. This new edition also contains detailed discussions and photos of other dinosaur lines that are commonly confused with the Marx and MPC figures, by such companies as Ajax, Nabisco, Tim Mee Toys, and others. Information is also presented concerning the various reissue and knock-off sets that were produced by other companies, as well as additional items and games that were directly based on the Marx and/or MPC prehistoric output. Also included is a handy guide to each playset covered in this book, with a listing of its contents, year of production, and model number. No serious collector of dinosaur playsets and figures should be without this book!"

Jeff Pfeiffer has been an avid collector and authority of Marx and MPC prehistoric playsets for well over two decade. Over the course of that time he has amassed an extensive collection of playsets from both companies, which provided most of the photographs in this book. He holds a Master of Science degree in Vertebrate Zoology and has served as an instructor of biological sciences at several colleges and universities. He currently resides in Little Rock, Arkansas, and is a former reptile biologist at the Little Rock Zoo. He also divides his time as a professional musician. His passion for dinosaurs began in childhood, when he was given his first set of MPC dinosaur figures as a birthday present, and continues to the present day. Dinosaur Playsets: An Illustrated Guide to the Prehistoric Playsets of Marx and MPC is the result of years of collecting and research and is an ongoing project, and Jeff hopes that aficionados of the dinosaurs of Marx, MPC, and related companies will find it a useful tool in their own collecting passions"